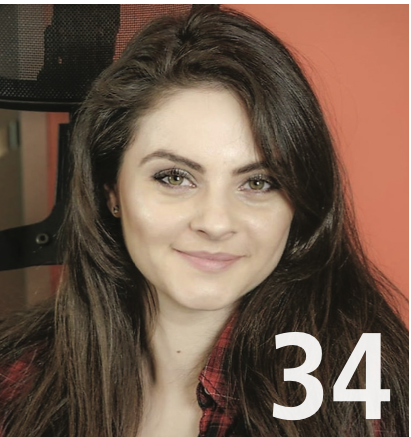 Luana Pascu explored a few different career options — including selling magazine advertising — before she discovered her talent for cybersecurity research.

Intrigued by the inner workings of the criminal mind, she now spends much of her time on the dark web, frequenting chat rooms and message boards. There, she absorbs information and generates reports for her employer Flare Systems, a Montreal-based digital risk protection provider. Those reports help Flare’s clients better prepare their own cybersecurity processes and increase their awareness of the potential dangers lurking online.

Pascu’s path to cybersecurity also included a trans-Atlantic move. She emigrated from her native Romania almost two years ago and is now settled in the Ottawa area. “I liked that Canada was really starting to invest in the tech sector and cybersecurity,” she says. “At the time, it kind of felt like Silicon Valley was moving to Canada.”

Pascu is no stranger to international travel — she has also studied in Amsterdam and lived in the U.S. for two years as a child. The pandemic created some unforeseen challenges in terms of settling into life in Canada, but she is confident the move is the right one for her, particularly in terms of the number of professional opportunities for women.

She has also written for a Toronto-based biometrics publication and is one of the organizers of the BSides Security conference, with a Montreal event planned for later this year.

Pascu initially thought her interest in criminal psychology might lead her to a career in law enforcement, but she’s discovered her niche and has fostered an online persona that enables her to move around the dark web. “Basically I’m a completely different person,” she says.

While there is a growing recognition of the importance of network security, Pascu says she would like to see more resources dedicated to cybersecurity education and raising awareness. “People are the weakest link,” she says. “It’s enough for someone to make a mistake and it can compromise your entire company.”

She would also like to see fresh approaches to security implementation — it’s unrealistic, for example, to expect most people to remember a dozen different passwords. “If we can figure out how to use biometrics in a safe way, this could be improved,” she says.

Pascu says she has found a home in Canada and plans to stay for the foreseeable future. She has discovered important professional relationships since settling here and has found a supportive mentor in Dominic Vogel, chief security strategist at Cyber.sc, whom she met via LinkedIn. She was also recently accepted to the Accelerated Cybersecurity Training Program, Rogers Cybersecure Catalyst in the RBC Women in Cyber Stream, at Ryerson University. Pascu hopes to return to Romania to visit her family as soon as COVID-19 travel restrictions lift.