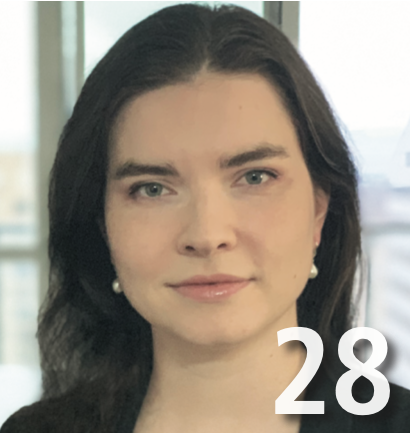 Victoria Granova discovered her abiding interest in cybersecurity as the result of an early pivot in her career.

Granova’s first professional engagement was as an accountant working for a mid-size accounting firm. When that company sought more cybersecurity expertise, it looked inward and tapped into Granova’s enthusiasm for new knowledge.

She took a part-time Certificate in Cyber Security at Toronto’s York University in 2016 and began to design policies and awareness programs for her employer. “As I was studying, I felt a passion for learning again,” she says.

Granova moved into cybersecurity, becoming the company’s security awareness officer in addition to her accounting duties. In 2017, she wrote the CISSP exam from (ISC)2 and joined the organization’s Toronto chapter in 2019 as a board member. In 2020, she successfully ran for chapter president and is currently in the second half of a two-year term.

She has also taught several cybersecurity courses at York — initially as an assistant and now as full instructor, providing a two-week intensive training session for a cybersecurity operations management course.

Granova joined her current employer, CIBC, in early 2019 as a senior information security consultant. She describes her role as helping to coordinate the communication process for security incidents that impact multiple departments across the bank’s organizational structure. “There’s constant learning. But particularly in my role, no two incidents are the same,” she says. “I get to learn constantly and meet new people as well. It’s such an amazing industry.”

Granova has also found time to further her own education and is currently taking a psychology certificate at Ryerson University — which is really an appetizer for her impending PhD studies, also at Ryerson. She plans to pursue the doctorate on a part-time basis starting in the fall; it will once again focus on cybersecurity but with a “human centric” approach that encompasses aspects of psychology and business studies.

Fully engaged in a busy professional and academic life, Granova says she is fortunate to be surrounded by a strong network. “I have a really great support system,” she says. “My family is amazing; my workplace is also amazing.”

She’s also grateful to the many mentors she has discovered along her cybersecurity journey, among them Neil Begin, Jeff Clark, Ali Khan, Gaurav Kumar, Jennifer Laidlaw, and Dr. Atefeh Mashatan, who will act as her PhD supervisor at Ryerson.

Granova has also implemented a mentorship program at (ISC)2 Toronto. “Mentorship is a wonderful, wonderful thing,” she says