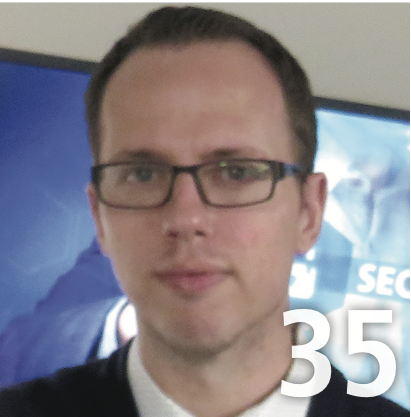 François Racine oversees a team of 30 employees, managing inspectors who conduct physical and IT security inspections for private industry which stems from a government contract, and screening contractors to work with the government.

Those projects could be relatively small, like a translation company hired to translate sensitive information, or a major undertaking, with a large business working on a national defence project, or a public-private partnership (P3). “We ensure that all security measures are in place for our government clients before private industry can begin their work,” explains Racine.

Racine started working for the government right out of school.

He attended La Cité Collegiale in Ottawa, graduating from their security management program, and participated in a government co-op. That led to his first official engagement as a casual employee at Public Services and Procurement Canada (PSPC). He moved on to the Canadian Food Inspection Agency as a screening officer before returning to PSPC, where he attained his current management role.

Before the pandemic, his Ottawa- based team would travel frequently to help conduct security inspections for government contracts across Canada. The adjustment to working from home has been quite smooth, says Racine, since his department was already paperless and his staff accustomed to working remotely. In some cases, on- site inspections have moved to virtual walkthroughs.

The team also meets regularly through Microsoft Teams — weekly for senior staff and monthly for the entire group. The check-ins have been an important way for Racine to make sure his team are well and in high spirits.

“It’s to see how they’re doing… what’s going on and it also gives me the ability to connect with the staff and verify what I can do to support them as a manager.”

He also promotes a positive attitude towards mental health in the workplace. “If I have a broken arm, I’m going to go to the doctor and get it treated. It’s OK to think the same way if you have a mental health issue,” he says.

Racine encourages his staff to get involved with security associations and fosters an environment that promotes mentorship opportunities. “I want to create a positive-impact environment for young professionals. When I started as a student, I didn’t know anything about the government. I want to be able to show young professionals that this could be a great career for you,” he says.

He represents the Industrial Security Sector-PSPC at the federal government’s Advisory Committee of Physical Security (ACOPS), a group led by the RCMP that also includes senior security representatives across the government. “We fought to be at the table,” says Racine.

“It’s nice to feel appreciated,” says Racine of the Top 10 acknowledgement, but he says it should be shared with
his team and co-workers. “My team — they’re rock stars.”