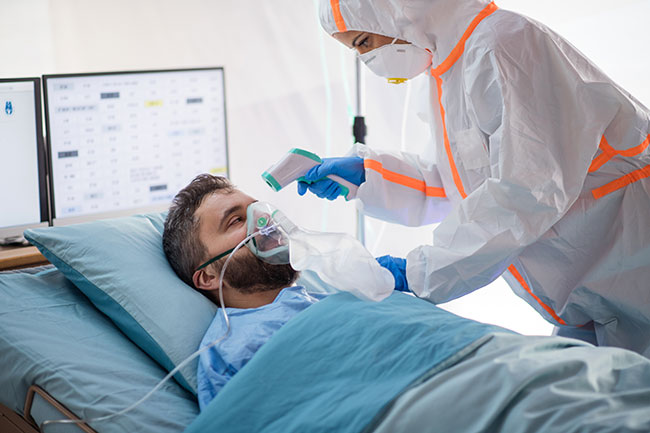 When the novel coronavirus (COVID-19) was declared a pandemic earlier this year, hospitals began to reevaluate their security measures and how they would manage through the virus.

Brad Stewart, security manager at Kitchener, Ont.-based Grand River Hospital, shared that very early on in the pandemic, the hospital began to evaluate the possible challenges they would have to overcome.

Among those challenges was securing the facility.

“We went from visitors to no visitors and then we restricted how many doors were open,” Stewart told Canadian Security. “With this facility, not all the doors lock, so we had to lock all doors that weren’t lockable and we had to get past that first hurdle.”

Stewart explained that another hurdle the hospital faced was ensuring that the hospital had enough staff at all of the entrances. He said that Grand River did not have a security contract in place, which led to him scrambling to find contract staff for a decent price.

“A lot of the [contract security] companies already had contracts in place with other facilities and then the pricing went up,” Stewart said. “I was able to basically call in a favour with a company and they were able to help us out…while we locked down.”

Similar challenges were experienced at Hamilton Health Services, according to security manager Derek Bailey. Bailey said that ensuring that the hospital had enough resources to secure the facility was a challenge, especially in the early days of the pandemic. “Making sure that we had adequate staff to secure our facility, while still being able to respond to any emergency incidents that might come up was one of the main challenges,” Bailey said. “We still have crisis in health care, we still have emergency situations that occur in the building, so it was really about resources — that was one of our bigger challenges.”

Stewart and Bailey agree that working in the hospital during COVID-19 posed more of a challenge for the mental health of their staff members, who have been struggling with the lockdown, caring for immunocompromised family members and general anxieties surrounding COVID infection rates.

“We’re grappling with what we could do to try and help them cope,” said Stewart. “We’re looking at strategies, reaching out to our human resources, and our organizational development to just look at what we can do for these guys because they are struggling.”

For Bailey, as the manager, he admits that he felt a lot of fear for his staff, as several of them were getting anxious about the mixed messaging they were getting about safety in the hospital.

While few were prepared for the havoc that COVID-19 would have on the world, health crises of the past acted as a guide to navigate through the current pandemic. Health-care security veterans Bailey and Stewart have previously worked through SARS and H1N1 (Stewart said he is thinking of getting a T-shirt that says, “I survived SARS, H1N1 and COVID”). The experiences from SARS and H1N1 have created the need for all hospitals to have a pandemic plan in place.

“The reality was every type of pandemic and every type of threat comes with a whole set of different parameters,” Bailey explained.

“Our plan is put into a live document and it’s being altered and enhanced as we learn new things and we encounter solutions as we go. What has worked today might not work tomorrow, depending on what the new normal looks like.”

Reflecting on his experiences working through SARS and H1N1, Stewart said that it did not prepare him for the lack of personal protective equipment (PPE) that Grand River faced in the early days.

“Our purchasing department was one of the first to create a list of PPE that was required, so they came up with a preferred list and then they just hammered every supplier they could to get those supplies, and we created a regional warehouse,” Stewart explained. “The nursing union was very upset about the supply levels, especially when Trump said, ‘We’re not going to ship to Canada,’ and then we had no idea where we were going to get anything.”

Maintaining that COVID is unlike anything he has ever experienced, Bailey said that SARS helped to prepare him and his staff for some of the access control issues that the hospital has been facing.

“The level of screening that we’re doing now I think probably will be our new normal — health-care facilities likely won’t be as open as they used to be because, from a risk perspective, we need to make sure that we know where people are going, and who they’ve been in contact with,” Bailey said. “I think there’s a lot of learning that has come out of this, but it’s ever-evolving.”

On Sept. 23, Prime Minister Justin Trudeau declared that a second wave of the coronavirus is already underway in most of Canada, after COVID cases in began to spike at an alarming rate.Having worked through the first wave and enduring the challenges that came with it, Stewart and Bailey are approaching their security strategy for the second wave differently this time around.

“In the first wave, I did not have an established security contract,” Stewart said. “I now have a signed contract. I’ve actually explored having a second contract just in case the first one can’t supply enough guards.”

With the winter months quickly approaching, Stewart said that he is going to work with his community partners to ensure that the homeless populations are taken care of.