Imagine that weather analysts predict a tropical storm will turn into a hurricane and hit the south coast of Jamaica within the next 36 hours. Do you know what to do? Do you know how you would respond? Do you have enough resources to do what will need to be done? 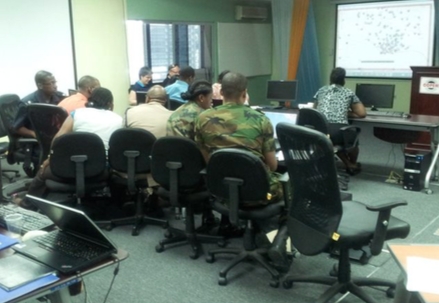 During the week of July 14, Calgary-based C4i Consultants worked with Jamaica’s Office of Disaster Preparedness and Emergency Management (ODPEM) to conduct a country-wide disaster preparation exercise.

The exercise focused on developing and testing plans for the upcoming hurricane season and aimed to improve crisis decision-making, planning and multi- agency communications. Computer simulation stations provided exercise participants with a realistic scenario in which they could fully participate.

The exercise focused on the 72 hours prior to a weather event and the actual event and was followed by an after-action review, highlighting lessons learned and identifying areas where change in response planning is required. It involved decision makers from key agencies, including the Jamaica Constabulary Force, the Jamaica Defence Force, the Jamaica Fire Brigade, the Customs Department and ODPEM itself.

This is the first country-wide computer simulation exercise ever attempted in the Caribbean. The week began with training on C4i’s Emergency and Disaster Management Simulation (EDMSIM) software. With a couple hours of instruction, participants were able to begin preparing for the hurricane exercise. As in real life, the decision makers in each organization verified that their critical response assets within the computer simulation were prepared, properly deployed and ready for the hurricane. Then they reviewed their plans and procedures and braced for the impact of the simulated storm.

The computer-simulated hurricane struck with full Category 3 force on Thursday, July 17, and the agencies worked together to deal with the impact and after-effects on the south coast of Jamaica.

Bruce Gilkes, president of C4i, says the computer simulation made the exercise much more realistic for participants. In previous years, they had done table-top type exercises, which were time-consuming and expensive and yielded limited results.

“When they were executed, it was thin gruel. The level of interaction was not really realistic, and there was arti ciality associated with decisions,” he says.

“But when participants saw this exercise, they said, ‘It is so realistic. Our people were energized and engaged, as if the actual hurricane was going on.’ So it was a whole new level of training for them.”

The main lessons of the exercise, Gilkes says, concerned communications. While they had recognized there were gaps in communication, the exercise helped them identify where those gaps were and what they need to do to further improve their response for the next time. It also helped show the importance of effective information flow between headquarters and the field during times of crisis.

“How you communicate, what information you’re sharing, what you report on to other people and how you co-ordinate the different activities — it’s at that level of communication, that co-ordination, where most of the friction happens in a real event. And they wanted to improve that. If you eliminate friction and get people used to talking to each other, then you get a much better outcome,” he says.

This exercise is part of C4i Consultants’ initiative in South America and the Caribbean to bring computer simulation to emergency and disaster preparation. C4i is now working with several aid agencies to help find funding to enable ODPEM to purchase an EDMSIM system of their own, so they can continue to conduct training exercises year-round.

Related
The night the lights went out in Calgary
Implementing an ESRM strategy: Keep the faith
Focus on retail
Defining the Emergency Manager Role