Whether they remember rows of ice-covered trees or cold meals in a dark house, few people who experienced the ice storm that hit the Toronto area in late December will soon forget it. The storm, which saw 20 to 30 millimetres of freezing rain fall over two days, caused some 416,000 Toronto Hydro customers to lose power, ultimately affecting more than 1 million residents. 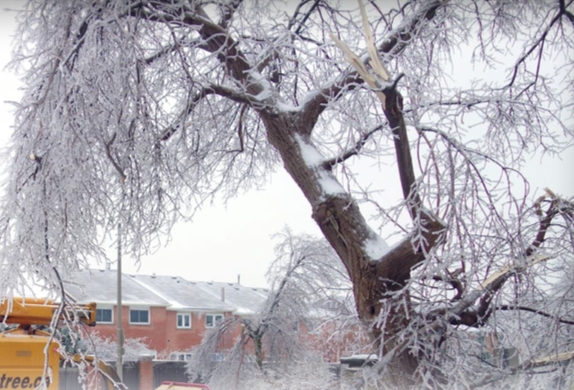 The storm also served as an unprecedented test of the resources and emergency procedures of municipalities, electrical companies and social services. As we head into another winter, the key now is to remember the lessons the storm had to teach.

“This type of storm had never happened before in Toronto,” says David J. McFadden, chair of the Toronto Hydro independent review panel, which in June released a report on the utility’s response to the storm. The report, which concluded the company met accepted industry standards, produced 25 recommendations.

The most important of these, McFadden says, concerned the utility’s communications system, which the authors judged inadequate for a major weather event. The report concluded consumers “could not obtain timely and accurate information about their outage,” including when power might be restored.

“It’s very helpful, when you’re in the dark and the cold, to be able to find out what’s happening. That was a key concern,” he says.

Vegetation management was another key issue, says McFadden, also a partner at Gowlings in Toronto. More than 90 per cent of the outage was caused by falling branches. The city must judge how much vegetation is manageable. “We have to balance out the tree canopy versus the safety and reliability of our utilities,” he says.

Also among the report’s recommendations was that Toronto develop formal mutual assistance protocols in Canada. During the storm, some 400 workers from other utilities arrived in the city to help.

“Hence, the public health messaging should be related to exposure to carbon monoxide, exposure to the elements and, potentially, checking food and water safety,” Schwartz says.

“People shouldn’t bring their generators or do any cooking on coal- red devices or gas devices indoors.”

However, Schwartz notes, the greatest impact of major weather events falls on people with chronic illnesses, mental health issues and cognitive disability. “Many people in the community lose their connection to life-sustaining medications, machines and care due to the weather and loss of power.”

Schwartz says the storm also demonstrated that the health-care system, both in communities and in hospitals, must be better prepared for emergencies. They need, for example, to be ready to support their staff to manage the upsurge and to provide extra staffing, especially during holidays.

Hospitals need also to be better prepared for power outages.

In addition, municipalities failed to understand that communities they have mutual aid agreements with might also be unable to fulfill the arrangements. Thus, the resources and support expected of others fell short. Cowley saw gaps in the private and public sector relationship.

“The lack of relationship with municipalities and local governments made it difficult to share resources and information,” he says.

In Brampton, the hardest hit community in the GTA, they learned they needed more effective ways to communicate with the municipality’s vulnerable population, says Alain Normand, the city’s emergency manager. While many residents could get into cars and go to family or friends, many others had no such resources.

“Those were the people who needed our services, the people with health or social vulnerabilities. But how do you reach them if they have no television, no computer?” he says, adding the city has already started to strengthen their networks with local social agencies.

“The agencies know who these vulnerable people are. Then they become the conduit for us to find out how to reach these people faster and have access to our services.”

Normand says they will also be reviewing their pruning standard to determine if crews should be clearing branches to a wider area around wires.

“The standard didn’t take into account the amount of bending that can happen during an ice storm. You add to that the weight of the ice on the wire. It doesn’t take a lot of extra weight to tear it down,” he says. “That’s the good lesson from an emergency. We don’t go back to status quo. We have to ask, are there things we can do so we don’t get hit again next time there’s an ice storm. Because who knows? We could have another ice storm next winter.”

Related
The human cost of emergency response
The night the lights went out in Calgary
Getting the threat: encouraging co-operation between security and emergency management departments
Defining the Emergency Manager Role