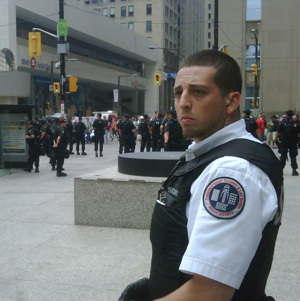 Despite the shocking scenes that emerged from the G20-related protests in Toronto over the weekend, many in the industry are pleased with the way public police and private security communicated and worked together amid the chaos.

Given that the G20 security operation was the largest in Canadian
history, and located in the urban core of country’s largest city, experts in the industry and those who witnessed the event first hand say the weekend
was handled well.

“Canada doesn’t have a long history of policing this kind of event. The
threat profile of a G20 is always much higher than the Olympics,” says
David Hyde, former director of security services at Cadillac Fairview,
now a consultant to the industry. “Toronto was told in fairly short
order that the G20 was happening and in the worst possible location. It
was probably the highest risk location.”

Prime Minister Stephen Harper announced Dec. 7, 2009 that the G20
Summit would be held in Toronto June 26-27 following the G8 in
Huntsville June 25. That left a little more than six months to prepare,
but those who found themselves responsible for protecting facilities
over the weekend say good planning and communication paid off and
allowed them to be prepared for the worst.

Large properties such as Commerce Court, First Canadian Place and College Park are tallying up the damages which are estimated to be in the high six-figures and projections are putting a final tab in the millions.

The damage sustained was “in line with what we expected,” says Jason Caissie, who works in protection services for a major bank.

“We had two windows broken but I think we fared better than most. I
think police did a good job of being where they needed to be and we did
a lot of planning ahead of time through both TAPPS (Toronto Association of Police and Private Security) and the Canadian
Bankers Association,” says Caissie who is also Ontario Assistant Regional Vice-President, for ASIS based in Toronto. He says email communication from
TAPPS was very strong, providing almost “turn-by-turn” notification of
protests on Friday and subsequently in a similar manner on Saturday
and Sunday.

Collective sharing of information and best practices achieved
situational awareness during the G8/G20, the earthquake and other
incidents that occurred during the week through public/private
partnerships like TAPPS, says David Neely, Security Services and Emergency Management
at the Ontario Ministry of Finance.

“A great deal of thanks needs to go out to the many individuals who
make these partnerships work —TAPPS, the Toronto Police, OPP, RCMP,
Hamilton and Durham Police Services were extremely helpful to our
coordination efforts," Neely said.

The guard companies had hundreds of feet on the street over the weekend, assisting clients with additional coverage.

“We covered several retail stores on the Queen Street strip and had
guards protect the store located in front of the second police car fire
on Queen with no damages to the store,” says Taillon.

The G4S team was also responsible for security of three large banks in
the core, Union Station, and hospital row as well as several retail
stores in the Toronto Eaton Centre as well as the Eaton Centre building
itself.

Lockdowns occurred at Union Station, the Eaton Centre and the Hospital for Sick Children on Saturday.

And it was Cadillac Fairview Eaton Centre in-house security staff who
were credited with spotting the four individuals coming out of the
sewer grates Saturday night.

ASG Security of Markham, Ont., provided about 3,000 hours of coverage for clients such as PCL at sites like the Ronald McDonald House.

"We had one guard who had something thrown at him but for the most part our guys were safe," says ASG president Paul Carson who had high praise for the actions of police. " At one point the police riot squad pushed the crowd out away from one of our buildings onto the street. They simply could not have estimated that things would escalate as they did. Sunday’s response is probably would should have happened on Saturday."

Securitas had 150 guards deployed to sites in the downtown core during
G20. Securitas Canada president Dwayne Gulsby was busy visiting client
sites Saturday including some of the banks and checking on guards
working in the core after the Black Bloc actions left some business
owners with broken windows and other damages.

“Some of our mobile units were providing intelligence back to customers
as incidents were occurring,” says Gulsby who felt police did an
admirable job in light of the actions of protesters and the number of
ordinary citizens who gathered downtown just to watch the events.

”¨Gulsby noted that for residents living in the core, it was often clearly difficult to comprehend.

“I was near a Starbucks at one point where the windows had been smashed
out and the resident living above the store was leaning out of his
window yelling at the protesters to get out of his city. And as we
drove out of the city we went past one of the burning police cars — it
was disgusting,” he says.

For its part, the Commissionaires had more than 1,000 staff involved in
the event, primarily working with RCMP inside the fenced perimeter.
Tom Prins, vice-president of client services for says for the most
part, it was “a great experience.”

“Most of our employees were behind the fence line. We worked with the
RCMP in the Summit Management Office and we found that we had to be
flexible as different situations arose. Sometimes we had problems
getting people out to their positions but if we knew trouble was coming
often they came in early.”

Leading up to the event, Prins said Commissionaires guards were given
“pretty extensive training” and senior site supervisors were selected
to manage the event. Training was also a big factor for guards hired to provide protection for several media outlets during the protests.

"I trained 100 guards for live eye vehicles used for close protection of broadcast personnel," says Steve Summerville of StaySafeIP based in Ajax, Ont.

"I also saw several guards use communication skills to help avoid potentially volatile situations in a number of actions at Queen and Spadina at at Queen’s Park. I saw security guards demonstrating really effective decision making on their feet," says Summerville.

Many organizations, such as Paragon Security, said they learned a lot from the experience and believe they can leverage the information for future operations.

Paragon had guards working 25,000 hours of extra security coverage for the G20 Summit.

“We saw minimal damage to our client buildings with no employee
injuries. Police were very helpful and responsive to our calls of
suspicious activity and persons. The experience brought our team closer
together, and we now feel more prepared for any future event that may
occur in Southern Ontario,” says Christina Duffey, manager of client
services for Paragon.