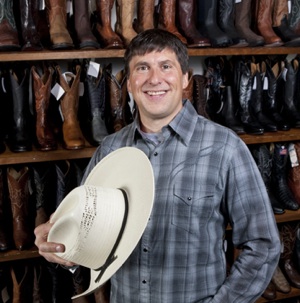 The merchandise at Kevin Mykle’s store may remind customers of a simpler past, but the technology watching them couldn’t be more high tech. And that’s just as well — when your store extends over 10,000 square feet and is filled with thousands of pairs of cowboy boots, several hundred hats, as well as saddles worth $3,500, it’s nice to know you’re staying ahead of the curve.

Stampede Tack and Western Wear, in Cloverdale, B.C., is one of the largest suppliers of cowboy gear in Canada. The first surveillance system at the store, which moved to its current location in 1970, was installed 10 years ago. They upgraded five years later to a Windows-based DVR. Then their integrator, Surrey-based Panarama Technologies, suggested they begin testing Honeywell’s latest video systems, and they jumped at the invitation.

Over the next few years, they tried out four new units, along the way replacing old cameras with digital ones. In the last upgrade, starting in December 2010, they began testing Honeywell’s newly launched HRDP DVR.

“Upgrading was not on our radar,” says Mykle, store manager. “But it was presented to us, and it just seemed like a natural step. And, being familiar with computers, hard drives and the digital aspect of it all, it was just something that was very appealing to us.”

Greg Puchniak, Panarama co-owner, says the project was a bit different because all the cameras were installed inside, two focused on the warehouse, the rest around the showroom. The challenge lay in the structure of the building, the large open room that goes up, way up.

“You’re in a retail store where there’s no drop ceiling, so there’s no ceiling tile, no hidden ceiling, and all the wire is pretty much done out in the open.  So, in order to make it still look good and not have wiring hanging everywhere — that was somewhat of a challenge,” he says.

One of the first customers to use the i-Phone application, Mykle says that having after-hours access is probably the biggest advantage of the system. He likes having a real-time view of each camera angle and being able to adjust each angle from his phone. But, mostly, he uses it to keep an eye on the store.

“It’s nice to peak in every once and a while when you’re not physically in the store to see what’s going on. We’ve got great staff, but it’s just peace of mind, that you can check in at anytime, anywhere. I just got back from holidays. I was down in Florida, and virtually in the palm of my hand I had all 16 cameras of the store at any point in time,” Mykle says.

Remote access has also helped reduce false alarms. The store is near a highway, and the noise of trucks travelling in the night often vibrated against nearby buildings and set off the alarm.

“It’s a bit of a pain when it’s 2:30 in the morning and you don’t know what’s going on, if it’s a real emergency or not. And you’ve got to come down and address the issue,” he says.

Now, when he gets a call from the emergency centre, he just zones in on the area that triggered the alarm. “And I can know right away whether it’s something that needs to be looked at right away or just reset the alarm and go back to bed. I can’t recall the last time I’ve come down after hours to check on the building.”


During the upgrade, the store added six cameras, giving them a total of 16. While there isn’t a lot of theft, Mykle says, they did want to increase coverage. They also wanted to be able to manage the system more easily.

“We’re very lucky with the type of business we have. We’re a destination store. The people who come and shop in our store come here because they’re interested in what we have. We don’t get a lot of drop-in traffic. But that doesn’t exempt us from shoplifting. And it’s been a while since we’ve had a break-in over night, but it has happened,” he says.

“We let it be known that the store is well covered with cameras, that eyes are always watching. We’re not shy about that aspect of it. I like to think just having the presence of the cameras is a deterrent.”

The system’s ability to retrieve information fast has also helped the store reduce theft, Puchniak says. Occasionally a person has come in, grabbed an item off a shelf, dropped it neatly into a bag and then waltzed up to the counter and asked for a refund. On the spot, a wary assistant can determine whether the transaction is on the level.

“Very quickly, they’re able to play back the footage and say ‘You didn’t walk in with anything. How could you be claiming you’re taking it back?’ ” he says. “It doesn’t take long to search for an item. I think that’s really helped them out as well.“

With the upgraded system and the extra coverage he has now, Mykle realized that he also has a really sophisticated marketing tool — because he can see what paths customers take through the store. After they enter, where do they go to first? What promotional areas are they stopping at?

“It would be so easy to review the patterns with this unit because you can just fast forward, rewind, scan and stop so easily, and you can bounce through the 16 cameras. It’s very simple. So you can study that and then lay out your store better — hopefully to increase your sales — based on how the people are shopping within the store. That is another benefit of the system, to provide a lot more than just security.”

Durno says more retail owners are using video and video analytics to look at consumer traffic flow. It’s really helpful, for example, in determining the effectiveness of a promotion or of special signage.

“What’s the flow through the store? And the signage and other means of promoting the product, are they working? Are there crowds of people around the area they’re trying to promote?” he says.

Mykle says one of the best aspects of the new system is that it allows him to find an incident much more easily than he could before. Where the process used to mean guessing which tape an event was on and then searching back and forth, now he can pinpoint an event in minutes. The quality and detail of the images is also much better.

“It’s far superior to what we used before. It’s close to high definition. Even the remote view, which is all wireless-enabled, is pretty good. When you consider what’s it’s doing, it’s excellent. And it’s full colour,” he says.

Puchniak says they chose Honeywell because Panarama has done a lot of work with the company and knows its products are reliable. But more important is the service it provides.

“There are so many different products to choose from now, and to find a No. 1 that has good Canadian support — that’s sometimes kind of tough to find,” he says.

“But mostly, it’s the brand name. You know if you have a problem, you can take it back and it’s going to be fixed.  One of our main suppliers is ADI, so being a Honeywell brand as well, it’s very easy to take something back and get support.”

Mykle says they are already considering a few improvements. They may install a camera outside. The previous one was stolen a few years ago, but better image quality means a new one could be placed higher and further out of reach. On the inside, they may go up to 32 cameras. But for that move, the store might just not be big enough.

“We haven’t made that decision yet, but we do have the capability of going even further now,” he says.