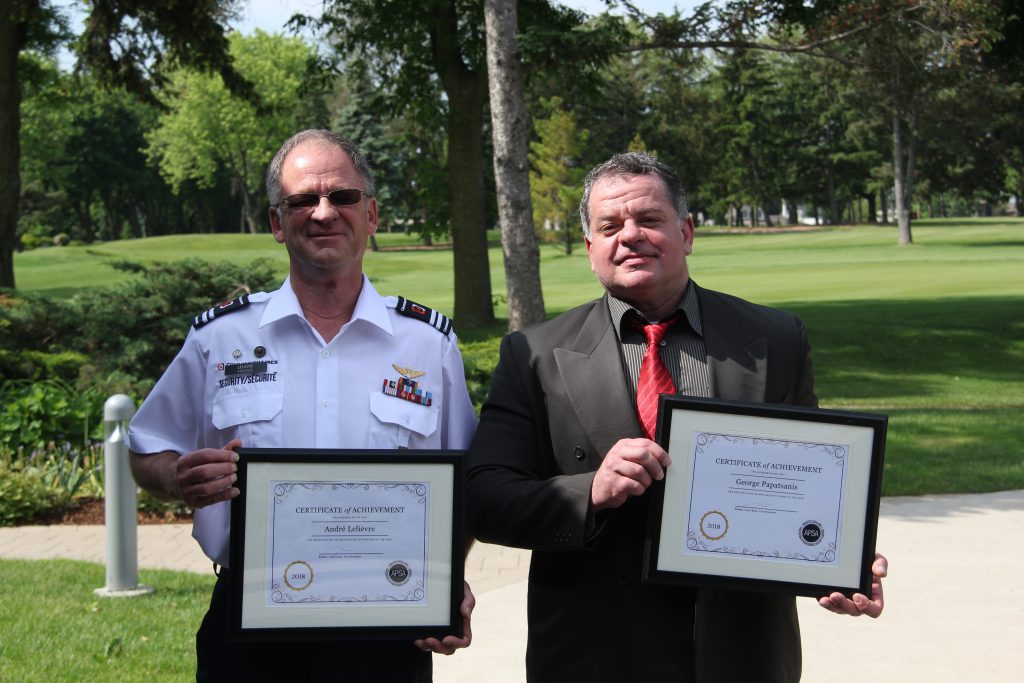 The Association of Professional Security Agencies (APSA) Canada honoured two security professionals as part of its annual awards program at the Weston Golf and Country Club in Toronto, on June 19.

George Papatsanis of Russell Security Services Inc. (RSSI) was named Guard of the Year, while Andre Lelievre of Commissionaires Ottawa earned the distinction of Supervisor of the Year.

Papatsanis, who has roughly 20 years of experience in the security industry, is an after-hours patrol guard at a golf course in Etobicoke, Ont. He said in an interview his day-to-day responsibilities include patrols of a very large outdoor space, monitoring and keeping intruders out.

In a letter to the APSA committee, RSSI Human Resource Manager David Beck said Papatsanis was nominated because of his handling of an incident that occurred last June, in which a suspect allegedly involved in a stabbing entered the golf course property covered in blood. According to Beck, Papatsanis notified the police and then detained the individual without the use of any force, de-escalating the situation so that the suspect was calm when the police arrived. “The situation could have been much different had George not shown restraint,” Beck said.

Papatsanis said of the incident, “My mind was racing at that time and I had to think fast and speak to him, get control of him first and not to try to put him down or use any words inappropriate toward him to aggravate him more, it was all about de-escalation.” He said that he advised the suspect against running away or further into the property and told the suspect to sit down and relax.

Papatsanis acknowledged the situation could have gone badly if he used force, and that any violence would not only have put lives in danger but potentially interrupted business for the golf course.

The guard said he is humbled to receive APSA’s award.

Lelievre joined Commissionaires in 2010 after a 30-year career in the Canadian Armed Forces. He worked as special services mobile supervisor and section supervisor on Parliament Hill before taking on his current position as special services supervisor, where he is in charge of mobile supervisor/patrollers, security patrol and alarm response contracts, short term and on-demand contracts, and special events—including Canada Day and Winterlude. Lelievre also supervises out of country tasks involving Canadian embassies, and security for the Prime Minister’s Office for overseas trips. He said in an interview, “I’ve got to find the guards, make sure that the guards are trained and they know what to do with the PPS (Parliamentary Protective Service) and the RCMP and all of the people involved on the prime minister’s side. They get their orders from there and I do the flight bookings and work in conjunction with the PMO’s office.”

Lelievre places important emphasis on training and resources. He said, “When I visit them (guards) and talk to them I want to make sure they have the right training, the right equipment, and that they feel safe while they’re out there.”

Commissionaires Ottawa says Lelievre was instrumental in saving the life of a colleague, who he checked up on at home after this individual was a no show at work, with the help of emergency services—the individual was barely breathing but was attended to by paramedics.

For Lelievre, the most rewarding part of the job is, “looking after the wellbeing of the Commissionaires out there… taking care of our people is my number one priority.”

On learning he won the ASPA award, Lelievre said, “I was quite surprised and very thankful for the people who submitted my name. I’m just doing my job to the best of my abilities.”