Anniversaries are a good time to reflect. With Canadian Security turning 40, this is a great time to look back and remember when the magazine and ASIS International have intersected across Canada. 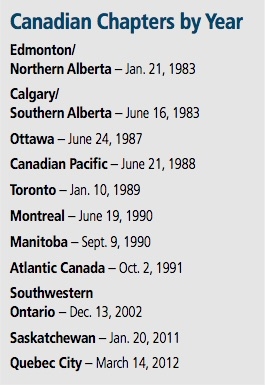 Since its creation as a Region in 1988, ASIS International has evolved in Canada. Interestingly, we have had various names, but whether you referred to us as Region L, Region 50, or Region 6, we have always represented security professionals in Canada.

Initially led by the now namesake of the Canadian Security Pioneer award, Ron Minion, Canada is now split into three divisions. As most industry professionals know, the award is presented annually to a Canadian security professional who has consistently worked for the betterment of the security industry over an extended period.

Nominated by a peer, the candidate must be a member of ASIS International in good standing. Today, Region 6 is split in three and is led by its own regional vice-president; the west, by Darryl Polowaniuk, CPP, PSP, the centre by William Van Ryswyck, CPP, and the east by Jean Charles Gris, CPP. The divisions allow for each of the 11 chapters to be reflective of local realities while working together to roll up on national and international initiatives.

Memorable events and a gathering of minds

Most of our industry leaders have experienced a Canada Night at ASIS Annual Seminar & Exhibits (now called Global Security Exchange or GSX). These  annual events are unforgettable and assemble members from coast to coast. It has quickly become one of the must-attend events at the show for Canadians and all of our friends! Often, this is the only time that people from opposite ends of the country can connect with one another during the year. This makes the event a more powerful and impactful experience for those in attendance.

A wealth of knowledge and professional development

The security industry has really evolved over the years.

This approach recognizes that security responsibilities are shared by both security and business leadership, but that all final security decision-making is the responsibility of our businesses’ leaders.

The role of the security leader in ESRM is to manage security vulnerabilities in a risk decision-making partnership with the organization leaders in charge of those assets. In short, the accurate mining, maintenance and analysis of data is key to securing businesses today.

Canadian Security magazine has been present all along the way, to promote our association and its members. This includes trumpeting the names of winning chapters and award-winning members — and there have been many over the years! Likewise, reaching out to leadership and members alike for their input on security incidents and trends.

Thanks, Canadian Security, for your leadership and partnership and for keeping security professionals connected, knowledgeable and informed.

This article originally appeared in the July/August 2018 issue of Canadian Security.