News
See and be seen 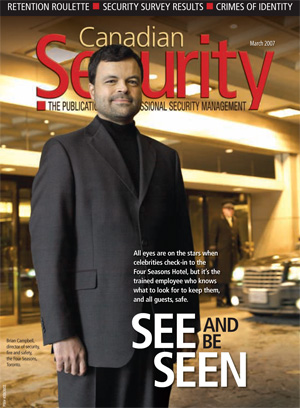 All eyes are on the stars when celebrities check-in at the Four Seasons Hotel, but it’s the trained employee who knows what to look for to keep them, and all guests, safe.

In the heart of Toronto’s Yorkville district, where celebrities and VIPs choose to stay while in town, guests expect they will be pampered and enjoy the amenities of a luxury hotel setting. They also expect privacy and a sense of security.

“Because we’re the Four Seasons, people see this as the celebrity place
to be, especially during the (Toronto International) film festival. It
certainly adds to the security undertaking, more so from a crowd
control perspective and with additional individuals in the lobby,” says
Brian Campbell, director of security, fire and safety with the Four
Seasons Hotel in Toronto.

During the film festival each September, locals know the Lobby Bar and
the valet parking area at the hotel are hot spots to find the stars.
The paparazzi know it too.

“We have measures set up both inside and outside the hotel, but you
still have the curiosity seekers or the autograph hounds that come in
and around the property. But during the film festival, while it is a
bit of a nuisance, it is also part of the lure of the film festival —
you understand it, expect it and go with it.”

Increasingly, guests of the Four Seasons, and indeed every luxury
hotel, expect the amenities that come with staying in higher-priced
accommodation also extend to additional measures of security and
safety. At the same time, hotels don’t want to appear to their guests
as being a fortress or a place that might be dangerous. More and more,
hotels around the world are implementing new strategies and tools to
improve their ability to know who is in their facility and that they
are safe when they stay there. Check-in at many U.S. hotels now
requires photo ID, such as a passport, and card access now controls not
only hotel room access, but also lobby-level washrooms. Those measures
are increasingly in place to address problems of hotel room invasions.

“New York City has different issues than we would, but you can’t sit
back and say we’ll never be there,” says Campbell. “If there is
something you can facilitate now, be it running of wires, or whatever,
to be ready for the next technology, then you do it. The industry has
gone to card locks, so we’re better able to establish time frames in
which those locks are operational ”“ and we’ve gotten away from hard
keys.”

According to Jim Stover, chair of the ASIS Lodging Security Council, a
hotel will only be considered a significant target for terrorism if it
is a landmark property such as the Waldorf in New York City or an
American property overseas.

Stover was vice-president in charge of safety and security for Bristol
Hotels and Resorts with 125 properties in North America including four
in Canada. Now he works with Arthur J. Gallagher Risk Management as
part of the hospitality and loss prevention team and is based in
Houston, Texas.

“In North America, I think the biggest concern would be a property
located next to a primary target such as the World Trade Centre which
took out the Marriott and the Hilton when it went down,” says Stover.

When it comes to new technologies for the hotel industry, Stover says
colour digital cameras are being used more frequently in remote access
control points such as entrances to parking lots and garages.
At the Four Seasons, a new digital camera system keeps tabs on key
areas such as the lobby and all street-level entry ways.

But Campbell
is not sold on cameras as a deterrent. The conundrum for hotels becomes
one of privacy versus security. When a large hotel in Toronto’s
downtown core experienced a murder in September 2006, questions were
raised about the hotel’s surveillance system because the incident was
not caught on video, making it difficult for police to determine
exactly what transpired.

Having footage may have helped the Toronto Police Service in its
investigation, but Campbell points out that surveillance won’t always
help stop an incident from happening.
His view is that it’s a crutch to say a tragedy born of a private
nature between two or three individuals that happened to take place in
a hotel could have been prevented by a camera.

“I think the individual
in that case couldn’t have cared if there were 15 cameras rolling. To
suggest there should be more cameras, I think that’s just a knee-jerk
reaction.”

While some hotels have put video cameras in hallways, some experts say
hallway video surveillance is a nightmare to maintain and largely
impractical.

“In a large hotel, if you have 150 camera feeds, you can’t
watch them all,” says Chris McGoey, CPP, a security consultant and
expert on hotel security based in Los Angeles, Calif. “But you can
select certain cameras and watch things like elevator banks, which some
hotels are doing.”

Casino hotels are considered to be “over-the-top” when it comes to
security because they want high-visibility — uniformed security,
cameras everywhere, card access and more frequent patrols. Casinos also
pay more for security personnel and hire more specifically for the
industry.

“But that’s about having the budget to do those things — they’ve got
the money to fund that,” says McGoey. “Luxury hotels go the other way;
because of their price points, they have a way of self-screening to
control crime at those properties.”

The greatest barrier to hotel security departments, says McGoey, is the
expense. If hotel managers are not seeing regular violent criminal
activity, for the most part, the budget for security is not increasing,
he says.

“They certainly aren’t spending when it comes to preventing
thefts from rooms and vehicles. But as they start having incidents
involving guests, they are concerned about the reputation of the hotel.
You definitely don’t want to be labeled as the place the homicide
occurred.”

Managing risk in a new era

Campbell arrived at the Four Seasons in 1986 after starting his career
at Toronto’s Carlton Hotel, upon graduation from Seneca College. At the
Four Seasons, he has one assistant and six in-house security officers
patrolling the 380-room hotel, which also has meeting rooms, a
ballroom, two restaurants and two lounges.

While the Four Seasons chain does not have a corporate security
director, “a lot of direction comes from home office and increasingly
so,” especially on issues of crisis and risk management.
While studying hotel fires on the other side of the world used to be
required reading for hotel security directors like Campbell, as other
threats have evolved, the focus has been directed to more current
concerns such as how to manage a bomb threat or terror alert.

“It used to be you would study what went wrong with a hotel fire and
what could we do differently here, but I think the same thing applies
now for terrorism. You read in the press how domestic terrorism is on
the increase so you have to be aware of that and whether you are
considered a soft target. How can you do things differently and still
present the same product people expect when they stay here?”

Training is the best defence

Campbell says that, while CCTV is part of his defensive strategy, his
most valuable investment is staff awareness and training.

“Gone are the
days of having just one department to secure the property. I think,
now, one of the biggest aspects of the security department is to
maintain training of all staff and bring them all in line as to what’s
expected. Obviously we’re not hiring crime fighters to work the front
desk, but you can increase their awareness so they recognize something
or somebody who is suspicious. Then you have 500 sets of eyes working
security in the building instead of just a dozen,” he says.

Campbell’s
philosophy is rare in the industry, says McGoey, noting that training
and reporting are sorely lacking in most hotel organizations.

“I see a great void in training across the board at the general manager
level. I’m astounded at what they don’t know, what they haven’t been
taught and how something that should be a priority isn’t a higher
priority for them,” he says. “When I ask to see training materials,
sometimes I see materials that are so outdated.”

Hotel general managers, says McGoey, are evaluated on profits,
occupancy rates and other benchmarks — security is not typically part
of their evaluation package.

“It needs to be mixed into part of their
management evaluation,” he says. “They’ve erred too far on the side of
being customer friendly.”

In fact, training and making sure all the staff are educated in the
different facets of security and life safety remains Campbell’s biggest
challenge.
Getting staff trained to handle the unknown has to be a regular focus.
If there is a bomb threat or other crisis, staff must move in unison to
the plan that has been developed.

“A hotel is a city within a city —
you have varying degrees of challenges, but I guess that’s part of the
lure of the job; the challenge of the job. Once in a while, something
comes along that you’ve trained for and it’s always interesting to see
the results.”