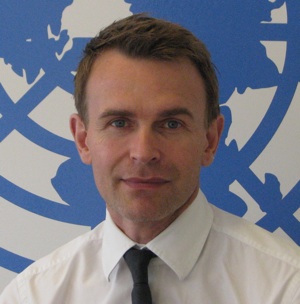 A Canadian who heads up corporate security for the UNOPS (United Nations Office for Project Services) has been named this year’s Security Director of the Year.

Thomas Gerstenecker, 43, is Chief of Corporate Security, Global Operations for the UNOPS, and currently based in Copenhagen, Denmark. He was chosen by the Canadian Security Advisory Board June 29.

In his nomination for Gerstenecker, fellow UN colleague Jason O’Connor said: “After taking over a non-existent security program in the organization, he quickly assessed the situation from strategic, operational and tactical levels in order to define his vision of having a robust security program at all levels.”

Gerstenecker, who grew up near Sauble Beach, Ont., said he was honoured the judges considered a practicing security professional working to further interests of the profession outside the country.

“I’m really thrilled,” said Gerstenecker when contacted by Canadian Security. “This is really an exciting time to be with the UN and I’m very thrilled to be receiving this award. It’s certainly been an extremely challenging environment in the last decade to be in the UN in the security field. The UN is no longer the safe haven we imagine it to be.”

This is the sixth year for the Canadian Security Director of the Year award, which is sponsored by Anixter Canada.

Gerstenecker, who is the first security professional hired by the UNOPS to serve in such a role, developed a Safety and Security Awareness campaign (SAFEUN) with endorsement at the executive level and in a global context within the organization.

“Ever since Baghdad when the UN was hit [22 UN staff members lost their lives when the Canal Hotel in Baghdad was bombed in 2003], there was a steep change in threats towards the UN which became more explicit and direct. The UN has, together with the member states, taken a more focused look at security management systems globally as a whole but also within the over 40 different agencies like Unicef and the World Food Program and looked at how to address security in a serious and professional way,” Gerstenecker said.

“The number of security professionals in the UN has increased at least 10-fold in the last 10 years where we now take a serious look at how to define program criticality within a country and define specific threats directly related to personnel and assets within a country we operated in all over the world.”

He says the outlook these days is “how to stay” in a region versus “when to leave,” which is a major shift for people in the field and member states and how they view security and provide funding for security in the field.

With a strategic security plan approved and in place, the operational roll-out was done with a robust communication plan which reached the almost 10,000 employees in over 100 offices worldwide.

“People ask me how one person can have global responsibility, but we have to appreciate things take time and making a commitment to bring on a senior security professional is already a big step for the organization,” he said. “As the budget cycle continues I expect to bring on more people to the team.”


Gerstenecker grew up two hours north of Toronto in Sauble Beach, Ont., and went into the military, spending four years in Germany. In 1995, he went through the selection process for Joint Task Force 2 (Canadian Forces Special Operations) where he spent five years. He has been with the UN for 11 years, two years of that time in Denmark.

He also holds a MSc Risk, Crisis and Disaster Management from Leicester University, and has experience with U.K. Counter Terrorism through Joint Task Force 2. He is also working towards his CISSP.

“Without hesitation, I would identify Tom as the most resolute professional that I have worked with, and for, in the United Nations Security Management System. Tom always leads by example and is able to clearly articulate his vision which ensures that his staff and colleagues remain motivated and engaged,” said O’Connor.

Judges took into consideration the challenges Gerstenecker faced in tackling security with the United Nations.

“It’s quite a unique position,” said Sean Bolli, Director of Corporate Security with CP Rail. “It’s a unique business. He has a lot of interesting operational and tactical projects in the nomination.”

“I thought the submission was quite outstanding,” said Cst. Kathy Macdonald of the Calgary Police service and Chapter Chair of Calgary and Southern Alberta Chapter 162 chapter of ASIS. “It gave specific examples of the projects he’s developed and has a strong educational background and he is working towards his CISSP which shows he has the physical and IT background. He also mentors others and he is responsible for a lot of people.”

Jacques Gagne of Winnipeg Health said Gerstenecker was his choice was based on his experience as a “risk crisis and disaster management professional with Leicester University.”

The judges also pointed out that while developing security plans for an organization like the United Nations might seem like less of a problem to “sell” to management than other security managers might face, that should not be the assumption.

“Since the economic crash a couple of years ago many such teams have had to tighten their belts. From this nomination it sounds like Thomas is maneuvering through not only the fiscal challenges but the political ones too. By having accomplished what is written in the nomination and by being able to understand military security operations, intelligence, physical security and IT security as well as he does, makes him someone we could all aspire to be,” says Michael Allen, Manager, Security, National programs with Oxford Properties.

Gerstenecker confirmed that statement, saying the argument often has to be made for security versus core UN programs.

“When you look at the fact that humanitarian and development programs are their mandate the last thing they want to see is security saying, ‘Let’s see if we have all the threat and risks identified in order for you to go into location X and deliver the malaria medication to remote areas of Afghanistan.’ They see mandate as opposed to, should we really be there?” he said.

Gerstenecker is married and has a six-year-old son. He will be presented the Canadian Security Director of the Year award in Toronto in October at the annual dinner sponsored by Anixter.

Watch for the September issue of Canadian Security for a full version of this story.