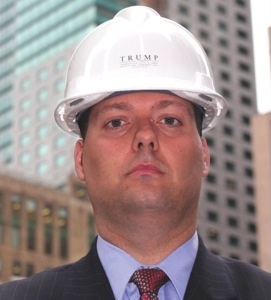 One of the first things Leo Manos noticed about the Trump organization is the quality of the business cards.

He was handed a stack when he first started as director of security for the Trump International Hotel & Tower in Toronto back in May. “The first thing I did was I opened the box of business cards, and I went, ‘Wow.’”

Trump business cards aren’t flimsy pieces of paper that get mangled in your wallet; they’re weighty pieces of stationery. And to Manos, they make a statement. “It’s been four or five months now, but when I give one of these out I want to make sure I’m only giving out one, because they’re so thick.”

The business cards are a hallmark of the Trump esthetic. They may be unnecessarily extravagant and perhaps a little too bulky, but when the Trump organization does something, it does so to get your attention.

“I think we have over 20 different kinds of pillows,” he says. “It’s unsurpassed luxury. There’s no shortcuts.”

The job of security director for the luxury hotel was a coveted one, according to Manos, and the security community in the Toronto area was buzzing with anticipation. Many top candidates had already interviewed for it, so Manos figured he might as well throw his hat into the ring too. When he learned that it would be his name on the business card, he was thrilled.

On his first day, he was treated to a warm reception — a traditional Trump welcome.

“I show up at 8:30 and there’s the entire executive team, ready to welcome me on board. I said, ‘Wow, that’s a first.’ You figure, the first day, you meet somebody, you sign the paperwork, you give them a handshake and a smile and you’re off to the races, and you go to your cubicle or your office and you start working. But this was quite the welcome,” he says.

“How many times does the entire executive team come out of their offices to welcome a new employee? But we do this (for every new employee). It’s part of the whole experience.”

The Trump hotel is located in the heart of the financial district at Bay and Adelaide. The official groundbreaking took place in October 2007. It was due for completion in the fall of 2011, but the opening has since been delayed until early 2012. More than 900 feet high, it’s one of the tallest buildings in Canada. The hotel features 261 luxury guest suites, as well as 118 private condominium residences with a price tag around the million mark and up. Permanent residents have a separate lobby on the 31st floor. There’s a five-star restaurant on the 30th floor and a bar on the publicly accessible ground floor lobby.

There are 250 cameras throughout the building, which were installed by Toronto-based integrator Bond Securcom. (No stranger to the luxury hotel business, Bond Securcom is also doing security for several other Toronto hotels, including the Shangri-La, the Ritz-Carlton and the Suites at One King West.)

“There are places in the city — commercial buildings and so on — that only have 120 cameras. But right off the bat, we’re opening with 250 cameras, all IP-based on a Lenel system, with video analytics,” says Manos, who points out that the Trump also has its own operations centre. “It’s just amazing. You’re looking at it and going, ‘This is going to be mine?’

“Every floor is secure; it’s card access only. The building is so secure. You have one way in, one way out. You get everything from the beginning. It was a very well thought out layout.”

Manos will be working with 11 full-time in-house guards on site, as well as a control room officer who will handle CCTV monitoring. Prior to opening, one of Manos’s main concerns is training — and everyone is trained to the same Trump standard. “I’m working with the best of the best. We’re not looking for entry-level,” he says.

“You can never have enough training. One of the great things about being a leader is you have your team and you get to nurture them and help them grow.”


Surveillance will be handled entirely on site 24×7, whereas fire systems will be monitored off site.

The other major item on Manos’s plate is creating the security policies that will allow the building to function effectively when it inevitably plays host to celebrities and dignitaries. “That ties up a lot of my time.”

Right now, Manos is operating in what he calls the honeymoon period. The work will continue to ramp up as the last of the construction is completed and the hotel gets ready for its grand opening.

Manos is used to being busy. He essentially worked two full-time security jobs for a period of a year. During the day, he handled security for the building that houses CSIS and at night, he acted as security director for the Hazelton, a five-star hotel in Toronto’s tony Yorkville area — an experience that surely stood in his favour when Trump was looking for its own security director.

Manos worked at the CSIS building from 7 a.m. till 3 p.m., then switched hats and worked at the Hazelton from 4:00 p.m. till midnight. “I did that every single day for a year. If you’re passionate about what you’re doing, it doesn’t make any difference how many hours you’re doing it for because you’re enjoying it. At a certain point, it’s not really work.”

The Hazelton opened in summer 2007, in time for the Toronto International Film Festival (TIFF) in September. Manos joined just prior to that and was immediately asked for an operational plan that would allow the hotel to cater to celebrities.

“I had to learn the building and where everything is, then create the policies and procedures. It doesn’t have to be a binder of 500 pages, but you have to put something together. That was really hitting the ground running.”

Manos joined Trump with a little more breathing room and the experience of setting up security during the construction phase has given him an ideal perspective on building a program from the ground up.

“The advantage of being involved in a hotel during the construction phase is you learn a great deal about the role building structure plays in safety,” says Manos. “You really have to partner up with engineering because they’re the ones that have a good knowledge of the facility. There’s a lot of things that you may find out after construction, and there’s a lot of things that you’ll never see. But if you’re partnered and working together and you want to know, from a security perspective, about the back-up generators (for example), the only way to find that out is to ask the engineer.”

Manos has also received advice and support from his counterparts at the other Trump hotels. The security director at Trump Chicago, which opened in 2008, has been particularly helpful, he says.

“It’s not a real secret,” says Manos, “but some of the growing pains that you go through when you’re opening a new property may be the same. You want to know how to handle it because it also saves you time if you have the heads up. You don’t want to spin your wheels when you can just ask for help.”

Manos hasn’t encountered Donald Trump yet, but his son Donald Trump Jr. did stop by the Toronto hotel to check on progress. “He came in and loved what he saw,” says Manos, “which is good, because it means we’re all doing a good job.”﻿