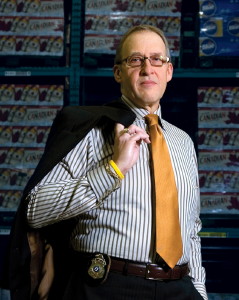 Bill Cowper is always up for a challenge. But overhauling security for a province-wide body responsible for the distribution and control of alcohol has been a project that has put his 30-plus years of experience in law enforcement to the test — often drawing on skills that have more to do with re-engineering business. But in this day and age, when security ideally works hand-in-hand with other business units, it’s how things get done right.

Four years ago, Cowper, a retired career sergeant with Halifax Regional
Police, began his second career as manager of loss prevention and
enforcement with the Nova Scotia Liquor Corporation. Early on, he
realized his goal was to help transform the organization’s lagging
security department and align it with the overall goals of the NSLC, a
Crown corporation governed by a board of directors accountable to the
government.

New provincial workplace violence regulations that identified liquor
stores as high-risk retail locations would also play a significant role
in how Cowper approached the project. “Like all other business entities
in the province, we had to come up with a risk assessment plan for all
our stores,” he says.

In part, that meant the deployment of networked DVRs to all stores that
didn’t currently have them, and integrated work- alone alarm systems.
If a clerk is inactive for a certain amount of time the alarm starts to
sound on his or her hip and also alerts the NSLC monitoring station
located in Halifax. The workplace violence regulation was effective in
getting the man-down system approved and in ensuring staff had
appropriate training — Armed Robbery Response Training and Responsible
Retailing 101, both of which are provided through an online portal
created by the NSLC.

Cowper says a large part of the threat the NSLC faces is from internal
sources but he says, “A lot of the times it’s not bad people in the
organization that get caught, it’s bad things happening to good people.
Opportunities present themselves and then it’s easy to slide into a
deviant pattern and without detection continue along that pattern.”

Cowper’s department wasn’t the only one undergoing transformation.
Recently, roll out of a new Enterprise Resource Planning (ERP) software
package began along with a new Point of Sale (POS) system that will
eventually tie in with the security camera system. There has been a lot
to get a handle on — especially with all of these new systems requiring
assistance from the IT department.

“My role initially, was to climb up to 20,000 feet and have a good lay
of the land,” recalls Cowper. “Add to the mix the whole issue of
convergence with IT. All of these security assets, whether it’s access
control, case management software, alarm systems and video surveillance
that are networked all require assistance from IT and we are still
developing what that model will be for convergence with our IT systems.”

Cowper says at the middle-management level, the NSLC is trying to break
down those barriers because they work closely together day-to-day. “I
have a good relationship with the manager of IT. Within the IT division
there’s also the system analyst and those folks have been very busy
rolling out the new enterprise resource management software for the
corporation. Couple with that a new POS and you start to see the
complexity really quickly,” he says.

While the rest of the organization has been pushing ahead with the new
ERP system and POS system, Cowper has pushed for the NSLC to look at
IP-based networked video recorders as opposed to standalone DVR boxes
tied into the network.

With all the other system upgrades happening within the organization,
the challenge for Cowper is to get the attention of the IT department
and get them to understand that security is a component of the business
too. “We require business expertise on the IT side and someone on the
IT side who has an understanding of security systems on the IT side. I
have a give and take relationship with them. They’re doing the best
they can but I really have to try and make a business case to get more
help than what I’m getting — maybe after the POS has been rolled out
and tested.”

At the NSLC, Cowper is an inspector under the Nova Scotia Liquor
Control Act which means he has the powers of a police officer for
enforcement of the Act and at the same time responsibility for loss
prevention for all of the 108 retail stores and 50 plus agency stores
as well as the warehouse and head office complex in Halifax.

When Cowper arrived at the NSLC a five-year plan was under development
for the organization, but security wasn’t yet a core component of that
plan.

“A lot was happening as a result of need within the organization,” says
Cowper. “Aged technology was coming to the end of its lifespan, and it
was time to look at overhauling all systems.”

There was also an absence of any case management system within the
security department and that was unacceptable. There was a reporting
system, but not a comprehensive one. Coming from law enforcement,
Cowper views a case management system as a tool necessary to properly
capture statistical information, but beyond that, making it useful as a
measurement tool to develop a proper metric.

The video surveillance assets in the stores and the distribution centre
were also failing to produce the kind of information Cowper wanted.
Up-to-date access control/key control at the store level and in the
distribution centre and head office were needed and the alarm systems
were in place but they were in serious need of an upgrade and a plan in
terms of how they were to be managed.

“It had to be a vision shared with the units we work directly with and
report to and with a more global view,” says Cowper. “As a service
within a corporation of this size, we have to tie ourselves very
closely to exactly what the business is. I’m mindful of that on a daily
basis.”

The NSLC has its own monitoring centre staffed by the Canadian Corps of
Commissionaires. They also serve as security in the warehouse and at
the head office. But Cowper is reviewing the technology in the
monitoring centre. “We’ve got some black and white monitors and some
colour monitors — 48 all in one room and they are tiered. From a
functional and ergonomic perspective they just don’t fit with the
direction we’re going,” he says.

Cowper’s focus to date has largely been on  the video surveillance
upgrades. The NSLC had a lot of old time-lapse VCRs and minimal cameras
deployed in the stores. They had already started down the path of
putting DVRs in place but they were a lot were first-generation DVRs.

“We knew that our video surveillance strategy at the time was not effective,” says Cowper.

The NSLC started by upgrading all stores across the province — about
six-to-12 stores a year and every new or renovated store was factored
into the new security blueprint.

“That was the impetus for us to move forward and come up with a
business case to retrofit the other stores and inside the distribution
centre where we did not have sufficient video surveillance assets. The
distribution centre is the size of six football fields — all put
together about 35-40 feet high — so it’s a large complex to protect in
terms of exit doors all over the place,” says Cowper.

“There wasn’t a real plan to have one vendor, one system — one system
that was a standard to allow us to train to one piece of software, one
solution,” says Cowper.

At the time the NSLC had about half a dozen different DVR manufacturers
in use and it was distributing, depending on what stores were being
built at the time, different DVRs. “It made absolutely no sense at
all,” says Cowper. “We standardized on one DVR manufacturer and looked
at it in the context of its lifespan. How far down the road will we be
able to go with it and will we be able to do things like POS
integration and can we get these devices on a network?”

NSLC chose to go with hardware from Dartmouth-based Pace Setter
Technologies. Right now, in the 108-store network, 70 per cent have the
Pace Setter DVR. “The question for us is, do we continue and use it for
the other 30 per cent of our stores or do we look at another
technology?”

In addition to walking into an environment with disparate technology
systems, when Cowper took the helm the security system integrator
working with NSLC was Eastern Vault & Security of Dartmouth, but it
was later purchased by Frisco Bay and then Stanley Security, creating
change at that level as well.

When it came to upgrading the access control systems key control was
something Cowper wanted to look at but the upgrade was also driven in
terms of workplace violence regulations. Many of the older stores
hadn’t been renovated and in some circumstances didn’t have a secure
door in a place where cash counting is performed, where the safe is or
where management work. Cowper standardized on door closures and placed
pin pad locks on doors, thereby creating an audit trail to determine
how often those doors are used.

“In the head office and distribution centre we had started down the
road of access control but hadn’t finalized where it would go,” says
Cowper. “The project involved getting the proper swipe stations in
place at all key bottlenecks and front door and employee entrances and
locking down the distribution centre in terms of who has access.

“I don’t see us as being much different than our friends on the marine
transport side of security in terms of the accreditation required to
know who is in our building at what time,” says Cowper.

For the alarm system upgrade, much like video surveillance, the goal
was to get on one platform, one standard — in this case, DSC panels in
the stores.

In upgrading the case management system the NSLC chose Edmonton-based
PPM 2000 and its Perspective product with the eReporting module which
is an electronic incident form provided over the company’s Intranet.
“Accepted” incidents move directly into Perspective for further
investigation. “We’ve had it for more than a year but incident reports
are still being done by some stores in a Word document and we’re
getting them via fax. We’re trying to wean them off the fax  and onto
email but we still have some who want to print it out.”

Overall, Cowper says his department’s role is to support the
corporation in strategic business areas, do it in a fun and safe
environment and making shopping at the NSLC a great experience.
However, he must also keep in mind return on investment.

“The underlying principle is: Where’s the cost effectiveness? How do I
make this cost effective because I will be asked where is the return?”