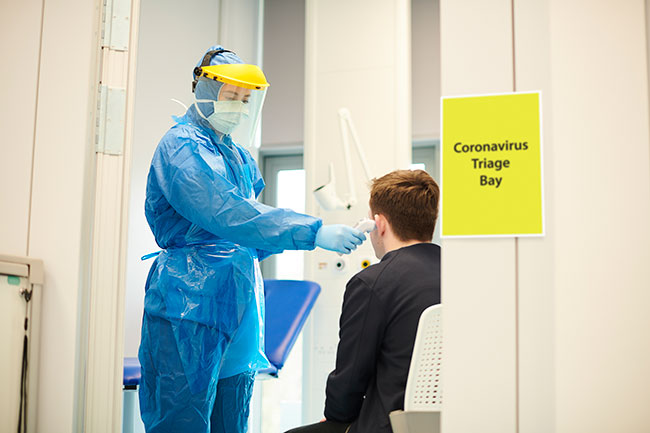 COVID-19 is an emerging risk for which the consequences are still unknown. That the virus could have potentially catastrophic health and economic consequences means that we must adopt a precautionary approach. Thus far, public health officials have focused on learning about the virus and containing it as best as they can.

As we learned in our study of the 2009 H1N1 influenza pandemic, part of the danger in addressing a pandemic is that we can become lodged in a prolonged state of learning.

Due to the speed at which COVID-19 spreads, we need to move beyond learning about the risk and start putting an operational plan in place to address the possible outcomes. This operational phase marks a different stage in the process.

Those operational plans have started to emerge, prompted partly by warnings from the United States government’s Centers for Disease Control and Prevention (CDC).

At the end of February, the CDC warned that the virus will likely spread across the U.S., which will result in large numbers of people needing medical care at the same time. The CDC noted that schools, child-care centres and critical service providers, as well as common workplaces and public gatherings, may also be affected by large-scale absenteeism.

The Public Health Agency of Canada has advised that social distancing measures, which are recommended to fight the spread of COVID-19, may have wide-ranging effects on individuals, communities and businesses.

On March 16, the government of Canada announced that international flights will soon be funnelled into a handful of airports. The previous week, Canadians abroad were advised to return home.

Intervention makes a difference. China has been able to slow the spread of the disease, but not without dramatic government actions of forced quarantine and isolation. These kinds of interventions are considered more difficult to achieve in a democratic state. Increasingly, Canadians are being asked to self-quarantine. Time will tell if the strategy is effective.

Co-ordinating a response is a complex task. Timely information is important when responding to, and trying to contain, communicable diseases. Information gathering and sharing, however, represents only one aspect of controlling a threat.

Notwithstanding government efforts, experience suggests it is reasonable to adopt a degree of skepticism about our collective readiness. When seemingly healthy 13-year-old Evan Frustaglio died suddenly of H1N1 in 2009, the emotionally charged event drove up demand for the vaccine across the country practically overnight. The health-care system was caught off-guard by the surge, despite months of planning.

Government pointed to the role that an anxious media had played in amplifying the risk. In our study of H1N1, we noted only 14 per cent of H1N1 articles referred to Frustaglio in the 30 days following his death; many articles included criticisms of government operations following the surge in demand.

Efforts to blame the media only underscore the fact that a pandemic plan needs to take media reporting into account. The government needs to think about how to use the media to communicate its message and respond to emotionally charged coverage when it occurs.

When vulnerable populations like children become ill, we are at risk of dramatic media coverage. The public can be volatile; how people feel today may not give us an indication of how they will react tomorrow. This can have an impact on our operational plans as it did in 2009.

Increased demand for health services needs to be addressed with an effective response that meets public expectations, which will change over time and will be shaped by numerous sources including media, government and lived experiences.

Achieving such a response requires that plans emphasize transparency, not strictly in what we know about the spread of the disease but also in the operations that are in place to address community needs. Warnings about the spread of a disease must be communicated in appropriate context, such as providing probability data (if possible), as well as in absolute numbers, and with advice about actions people can take to address the risk.

Communications must almost always be led by experts with responsibility; scientific experts are particularly trusted. Politicians are there to provide democratic leadership. At times, decisions will be political, especially in discussions between jurisdictions and with opposition parties, and when there are difficult trade-offs to make. Still, the government is right to move forward on the basis of the best expert advice, a theme the prime minister refers to regularly.

Public agencies will have to show adaptive and surge capacity, as well as diverse means to accomplish mission-critical tasks as new and unexpected conditions emerge. This is a lesson not just for the health sector but for all critical sectors, such as manufacturing, transportation, education, and water and power supply, the operations of which may be affected by the virus.

COVID-19 may not be a devastating event; the point is that no one knows when it comes to these types of risks. Whether or not it is serious, the impact of planning is already starting to be felt. It is now incumbent upon the government and those who deliver key services to plan for reasonable worst-case scenarios — cases that are known to have happened in other Western jurisdictions or during pandemics.

Adaptive capacity does not come naturally to bureaucracies; we value them for their stability, not their capacity to change. Frontline health-care services are under pressure already during the influenza season. It is not realistic to think this service in particular can cope with a wide-scale health emergency without more resources and creative thinking, or without planned responses to different magnitudes of such an event.

– This article is republished from The Conversation under a Creative Commons license. Read the original article.