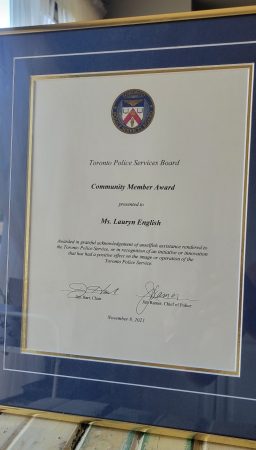 Lauryn English, security supervisor at Toronto’s CN Tower, was recently acknowledged by the Toronto Police Services Board with a Community Member Award.

English received the award in recognition of her assistance to the Toronto Police Service in safeguarding a child who was discovered by English on CN Tower premises.

English was the security supervisor on duty at the CN Tower one evening last November, when informed by police that a child with special needs had run away from home and was believed to be in the area. English acted quickly and, in coordination with her security team, located the child, who was speaking with an unknown adult male. English intervened, and the child was returned to their parents by police services. It was later discovered via video surveillance footage that another unidentified male adult was waiting nearby. Both men fled the scene. Police investigated the suspicious incident and issued a public warning via a media alert.

English was also acknowledged for her quick and decisive actions by the Canadian Security Lifesaver Association earlier this year.