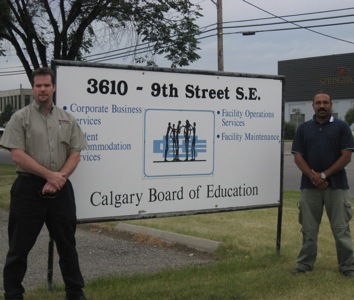 The Calgary Board of Education has awarded a contract to Sonitrol to install Sielox access control systems in 72 K-12 school buildings.

Installation work began in July and the first phase of the project is
due to go live by the end of 2008. A second phase, over and above the
initial 72 buildings, was still to be awarded at press time.

“There’s a main server going in and that will manage all 72 schools,”
said Karen Evans, president of Sielox, based in Runnemede, N.J.
“They’re all connected via the school’s wide area network. There’s LAN
controllers out there that are all controlling several doors with card
readers. They’re going with a smart card technology,”

Dan Jones, sales manager for Sonitrol of Southern Alberta, described
the technology as an RFID-based one-card solution designed for access
control. The primary users of the cards will be staff and teachers, but
may eventually include students.

The schools should benefit from the ease of use and low maintenance
associated with access control, said Jones. “With a key system, it’s
much more difficult to replace the system, because you’re looking at
rekeying locks.”

There is also room for expansion beyond door control, he said: the
Sielox system allows the cards to perform multiple duties, including
vending machine access, computer lab log-on, photocopiers, and other
electronic devices which can be accessed via RFID technology.

They can “literally control anything that can be controlled with a
switch,” said Jones, adding that each card is encoded with a unique
algorithm; the chance of creating a duplicate is one in 6 billion.

“We worked very closely with Sonitrol, helping them with the RFI and
the RFP. I actually flew in to give a presentation to the school
district,” she said.

Sielox sells to school boards across the U.S. The technology can also
be found in Also in high rise commercial buildings, hospitals,
university campuses and other verticals, said Evans.

The company’s largest Canadian client base is in Toronto, she said ”“ mostly for commercial high rise engagements.