Commissionaire Jeffery Rochon is the recipient of the APSA Guard of the Year award. 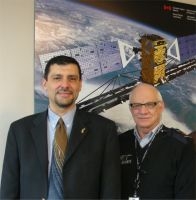 The award recognizes outstanding performance in the security profession and is given out annually by the Association of Professional Security Agencies (APSA), whose 16 member companies represent over 30,000 private security guards across Ontario.

Since 1998, Cmre Rochon has earned respect and admiration for his security-related contributions to the Canadian Space Agency’s David Florida Laboratory (DFL) — Canada’s world-class spacecraft assembly, integration and testing facility. He was recruited by Commissionaires Ottawa in 1995 following more than 30 years of continuous service with the Canadian Forces as a communications specialist, personnel manager and administrator.

During his military career, he was presented with the United Nations Emergency Force (UNEF) medal and a Canadian Forces Decoration with two long service bars (CD&2).

Paul Guindon, CEO, Commissionaires Ottawa, says, “As a Canadian Forces veteran, Cmre Rochon carries with him a passion to protect Canada’s freedom and peaceful way of life. As a model security guard, his personal integrity, professional expertise and exemplary performance record are first-rate. As a dedicated employee, he is a leading example to the more than 3,800 commissionaires in our company.”

Some of the many roles that Cmre Rochon has excelled in while at the DFL Laboratory include: security officer, security administrator, fire and construction safety authority, quality control officer, trainer, and tour guide. Cmre Rochon has been instrumental in creating many departmental policies and procedures, databases and forms for his client. He is also trained in confined space safety, fall protection, overhead crane and hoist operation, automated external defibrillation, forklift certification, and WHMIS.

In addition, Cmre Rochon is known for fostering a family atmosphere while on the job, volunteering improvements to the work environment, as well as raising thousands of dollars for charitable and social events.

“There is no question that Cmre Rochon’s good character, professionalism and years of dedication
have impressed both Commissionaires Ottawa as his employer and the Canadian Space Agency as
our client. It is in part thanks to the glowing references of Mr. Magdi Farid [Manager, Building
Operations & Security at the Canadian Space Agency] that his nomination package for the APSA
award was so well-received. This award is well-deserved in every respect.”

In addition to an engraved plaque to be presented at APSA’s general meeting in Vaughan, Cmre Rochon will receive a $2,000 cash award and one night hotel accommodation.