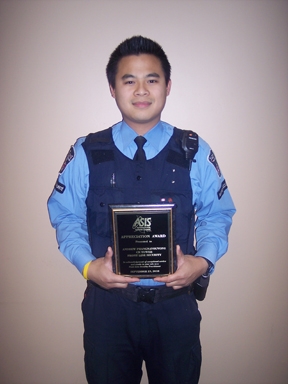 In the category of Investigations, Sean Sportun of Mac’s Canada won for his work on a project that saw the use of DVR remote monitoring to assist with investigations, compliance and provide a proactive approach to loss prevention at the convenience store chain.

Since the system was implemented, Macs has created better protocols to reduce or eliminate incidents from re-occurring. In addition, they saw a reduction in overall shrink from 2.1 per cent to 1.2 per cent and a 70 per cent reduction in WSIB claims from the previous year.

The Technology award was presented to Tony Cicirello of Mobile Communications for the work he did with the Commercial Real Estate- Financial District Security Group to develop and implement PATHcomm, the interoperable public/private emergency channel network to link the financial towers to each other and emergency services.

Lina Tsakiris, Manager of Physical Security for RBC Protection Services won the Women in Security award for her work on several high profile events in 2010 including the Winter Olympics and G20 Summit in which the bank was specifically targeted by protestors. Tsakiris was also commended for her exceptional customer service skills that have helped to bridge the gap between the court employees, the Crown’s office, police, the public and others.

In the category of Frontline Security, Andrew Phangnavouvong was selected for his efforts to save the lives of three individuals at the CN Tower this past summer. On July 18 he administered CPR to a tenant who lost consciousness due to a heart attack. Phangnavouvong noticed the man’s demeanor was unusual and it was at that time that the man complained of chest pains. Phangnavouvong reacted by administering CPR and ultimately shocking the man with a defibrillator to help save his life. And, on July 29 he administered CPR to an elderly guest who had lost consciousness. Again on Aug. 19 he assisted a male off CN Tower property who became unconscious due to a heart attack, thereby helping to save his life.

For more details on the winners, watch for the December print issue of Canadian Security.