From a safety and security perspective, the G7 Summit in La Malbaie, Quebec has successfully come and gone. Yet its thousands of supporting security and operations personnel were prepared for the worst. That’s because it’s their job to be. 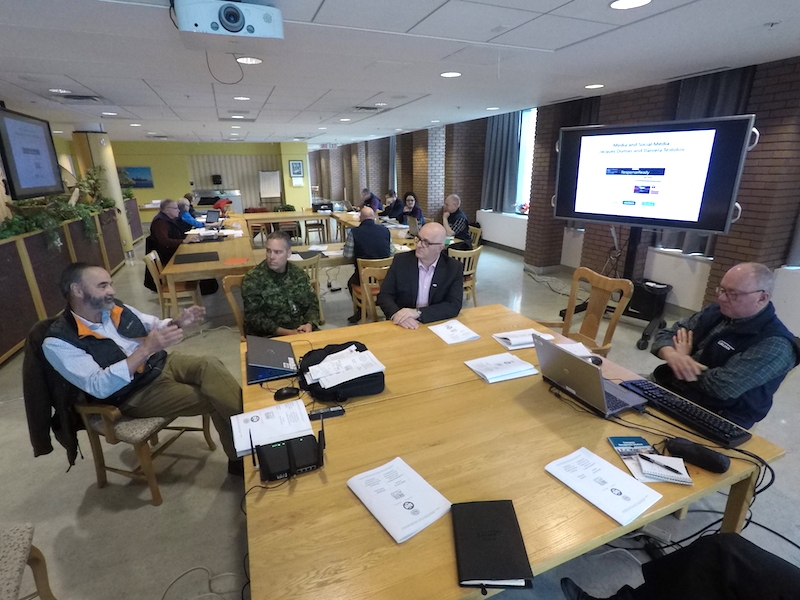 Over two and a half days in April, the Government of Canada ran a large-scale, G7 Summit preparation and security exercise involving more than 800 participants from federal, provincial and municipal governments and agencies. Known as Sentinelle II, the program used routine and worst-case fictional events to train participants and exercise inter-agency plans, operational procedures, information sharing and command-and-control processes. Participants worked their way through about 150 of these unexpected training events — or injects — ranging from a lone wolf attack to severe weather that impeded world leaders’ travel.

To maintain a realistic training environment, the roughly 35 organizations participating were encouraged to work from their own operations centres or command posts — primarily located in Ottawa, Quebec City and La Malbaie. Fundamental to the design and delivery of the exercise program and in support of its lead organization — Defence Research and Development Canada’s Centre for Security Science — was the Canadian Amy Simulation Centre (CASC).

CASC is a training organization managed by the Canadian Army in partnership with Calian Training. As a Calian employee, I had a chance to visit the training exercise and see first-hand the operation of some of the centres and command posts. I also got an exclusive opportunity to interview Pierre Trudel, Director of Strategic Planning and Exercise Program for the G7 Federal Security Pillar.

Mr. Trudel’s sought-after expertise is built on a breadth of unique experience. Following a more than 25-year career with CAF and several deployments — including one with NATO in Afghanistan as a senior military advisor to the Senior Civilian Representative — he led domestic operations planning at Canada Command. That segued in 2007 into a career in the federal public service as a strategic planner and exercise practitioner. Already under Mr. Trudel’s belt is high-profile security and safety planning for the 2010 Vancouver Olympics and Canada’s hosting of the 2010 G8 and G20 Summits, as well as this year’s G7 Summit. An edited interview with Mr. Trudel follows.

Why are these kind of exercises so important?

We use the exercise program to test and validate plans, procedures, policies, training and equipment. That’s the first reason. It’s also important to train people in their function who are participating in the summit. When you run an exercise, it improves inter-agency integration and exchange of information and it’s been very important in developing and validating the command and control structure.

Another reason is that having an exercise helps us identify where we need to focus training and where we need to diminish or increase the allocation of resources. I’m not just talking about operational challenges but equipment like fire engines or ambulances, personnel, funding – logistics basically. Exercises also allow us to add the very important aspect of public affairs into the mix, given the impact social media has on operations, as well as the legal component.

How did the exercise go?

It went very well. First and foremost it was designed to exercise the different command centres at the federal, operational, provincial and municipal levels. There were no “boots on the ground.” We had a series of training objectives such as practicing plans and protocols, sharing of information and confirming the integrity of voice and data communications networks — which were all met thanks to the effort of the exercise team and the preparation of partners.

Can you tell me more about the exercise scenario and some of the injects?

We had five themes, the first being daily operations – so activities such as Internationally Protected Person (IPP) movements, the summit agenda, motorcades, etc. We added complexity, for example, in the form of severe rain that prevented planes from flying or a head of state doing an impromptu visit outside the Controlled Access Zone. That meant ops centres had to take action and fall back on alternate plans.

The second theme was summit security. It focused on the different law enforcement agencies and the Canadian Armed Forces. Scenarios ranged from unrest to watercrafts entering the maritime interdiction zone to drones operating in air-restricted areas.

We also focused on terrorism, the third theme, and then again we had plenty of surprises for participants. They had to deal with cyberattacks, CBRNE incidents and the presence of less-than sympathetic persons.

Emergency management was also a theme to integrate participants from the provincial and municipal levels, with federal partners playing their usual support roles under these conditions. Fires, a maritime oil spill or a ship adrift close to shore were just a few of the scenarios exercised.

The fifth and last theme was health, which was important as it covered all activities associated with a summit — from air evacuation of an IPP to food poisoning to water contamination.

All of this took place over a two-and-half day period, which we divided into three segments. The first half-day of the exercise was used to practice the arrivals of IPPs. The next day we ran the exercise for 12 hours because we wanted to do a shift change between the day and night teams. The shift change is key because the people departing need to debrief the arriving team and follow procedures to communicate what’s been resolved and what’s ongoing. On the third morning, “night operations” were the order of the day. Night operations are different because prevention is more difficult and you use different means to observe, and so on.

What are some of the challenges of multidisciplinary and multijurisdictional exercises of this scale?

Bringing together 800 participants, who in many cases may have never operated as a single entity, is always a challenge. Sentinelle II provided a unique platform to achieve the required level of integration and brought together organizations with different cultures, mandates, experience and capabilities for a single purpose – readiness in support of the G7. I’m certain it was the first time that the municipality of La Malbaie participated in such a large-scale event. In the end, their level of emergency preparedness will be a positive legacy of the summit. The same applies to other partners who were participating in such a complex exercise for the first time.

Another challenge is the exchange of information. There are real limits on what organizations can tell each other based on the security classification of the information. Law enforcement organizations cannot easily share information with other agencies, and same goes for those in the intelligence world. The exercise allowed people to understand the limits of what can be shared and how to mitigate potential impacts on operations. The sharing of information is at times technically challenging as there are many types of systems in place and they are not necessarily interoperable. A way around that is to place liaison officers, who have access to the information via their own systems, in key command centres, ensuring essential information is shared.

What did the CASC team bring to the table?

Without the Canadian Army Simulation Centre, we could not have delivered this exercise program. It was true in 2010 for the Vancouver Winter Olympics and the 2010 G8 and G20 summits – because it’s the same team that did those exercises – and it is true now. They bring expertise, professionalism and resources. We are so fortunate they took on this daunting task under the leadership of Ray Wlasichuk. For me, it’s a unique capability that we have access to and it’s crucial to putting together an exercise program for a major event. There is not a single organization in town that is equipped to do this as well as they are.

Simon Doyle is the Senior Media Lead at The Calian Group.
Print this page

Related
CSIS says harassment lawsuit should be tossed, admits ‘inappropriate language’
Security bill needs safeguards to prevent ‘a profile on all of us’: privacy czar
RCMP say escaped murderer Steven Bugden is back in custody in N.B.
Police following up on report of radicalized Montreal airport employees: Coiteux