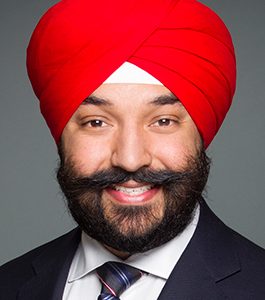 TORONTO—Innovation Minister Navdeep Bains unveiled a wide review of federal privacy laws Tuesday in what he said was an effort to build trust in a digital world.

Bains announced the review as part of a 10-point digital charter that he said is necessary in a rapidly evolving society and economy that’s increasingly data-reliant.

“We need to get serious about rebuilding trust because people are currently losing it,” he said at an Empire Club of Canada event in Toronto.

“In the 21st century, either we build that trust and compete in the data-driven digital economy, or we don’t compete at all.”

Bains committed to a review of the federal privacy law for private-sector organizations, known as PIPEDA, as well as the Privacy Act, which applies to federal government institutions.

He said the government has also written to the Competition Bureau to ensure the agency, an autonomous part of his department, has the tools to promote competition, including room for small and medium businesses to compete.

Bains said he also plans a review the Statistics Act so citizens have faith in the agency’s data collection, and it will launch a new Data Governance Standardization Collaborative to manage data governance standards in the country.

Statistics Canada was forced in November to put on hold a controversial plan to sample banking information from 500,000 Canadians through data obtained from major financial institutions, pending a review by the Office of the Privacy Commissioner.

Bains said the Liberal government—which emphasized an innovation agenda before and after the 2015 election—will look to collaborate with businesses as it updates policies.

“Governments can’t do this alone, we need businesses, we must work together…that’s the only way we’ll build trust in our digital institutions.”

The move was welcomed by the Council of Canadian Innovators, a business group that says it represents over 100 of the country’s fastest-growing technology companies.

“Canadian innovators have long called on the federal government to develop a national strategy that recognizes data as the most valuable asset in today’s economy,” said executive director Benjamin Bergen in a statement.

“While our members are pleased to see the government is concerned with issues posed by data-driven economy, more work is needed to ensure data collection, use, monetization and data flows serve the interest of Canada’s economy.”