The vice-president of operations at the Canadian Air Transport Security Authority (CATSA) wants to make the job of an airport security screener more attractive as a profession.

Yves Duguay says that in airports such as Glasgow, Scotland, the average security screener has been in the job about 15-18 years or more. And while some screeners at Toronto Pearson airport may have that kind of experience, it’s not the norm across Canada, especially in Alberta where screeners have been lured by higher-paying jobs in the oil patch.

“We’re trying to transform it into more of a profession,” says Duguay, who wants to see a better recruitment and retention program created for Canadian airport screeners, something that will become even more critical as the industry competes for employees against other jobs in the security and policing sector.

“We need to make it more appealing. If they are paid well, perhaps it will make a difference too,” he says. Duguay spoke at the Canadian Aviation Security Conference, held in Ottawa, March 5.

One way to attract and retain talent and to have a better screening outcome might be to following the lead of the Transportation Security Administration (TSA) in the U.S., which compensates airport security screeners on performance. 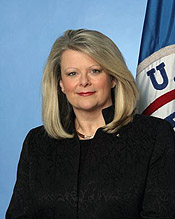 Gale Rossides, deputy administrator of the TSA says the annual pay of screeners in the U.S. is based on their performance every day on the line. They are tested and have to meet set standards every year to keep their jobs and maintain compensation levels. Training of screening officers also occurs on a weekly basis.

U.S. screening officers are tested during every shift at each of the 450 airports in the country. The TSA conducts 70,000 electronic tests on its workforce every year and 2,500 covertly placed mock bomb components are inserted into the screening system for detection by screeners. Rossides says improvised explosive devices (IEDs) are the No. 1 threat at airports today. The concern is the parts could be snuck on board and assembled in the air.

In Canada, screening officers are also tested on a daily basis with items placed secretly by supervisors.
“The screeners are on their toes and don’t have a lot of time to decide what they’re going to do,” says Marc Gregoire, Assistant deputy Minister-Safety and Security, Transport Canada.

The TSA is also training officers to do passenger behaviour screening.

“The human brain of our officers see two million people a year, so we’re trying to leverage that capacity to identify individuals who may show intent to do harm,” says Rossides.

But Gregoire is cautious about adopting screening methods based on behaviour.

“The big fear is that it will turn into racial profiling and we need to make sure we will never do that,” he says.
And while technology can play a role in improving the screening process and making it faster, Rossides says the human factor is still the most important.

“We do have a layered/integrated approach, but one of the greatest assets we have are our people and we are leveraging their knowledge,” she says.

Using the idea of building on experiences, Duguay says shift briefings are something he has also considered, which would see screeners share their experiences together after their day is done.

The TSA’s current target for processing passengers through a screening checkpoint is 200 people per hour. It’s a target CATSA is considering, but it will be a significant challenge.

Throughput at Canadian airports varies depending on the airport configuration, says Duguay. “Where we have more room at our disposal the throughput is higher, where passengers are more disciplined, more knowledgeable, there is higher throughput. Having said that, our throughput varies from 100 to 125 passengers an hour, in the Canadian context, especially in the winter time. This means we have to analyze a lot of images so the throughput in the summer may actually be a bit higher.”

“It can be done,” says Duguay. “But we need more screeners and better equipment.”

Reducing the time spent getting a passenger through a security checkpoint continues to be a problem for many reasons including the reluctance for passengers to accept and understand the limitations on carrying gels and liquids in carrying on luggage.

CATSA is currently exploring CCTV analytic software from Honeywell that will help determine how long it takes to move passengers through security checkpoints at select airports around the country.