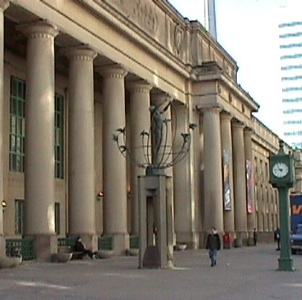 It’s early March and as Silvia Fraser walks amid the dust, paint fumes and construction workers feverishly working in the new security operations centre at Union Station, she inspects the progress being made. Wearing a hard hat and just a hint of excitement showing on her face, she surveys the new video wall at the Toronto landmark.

“It’s like Christmas,” says Fraser, supervisor, security and life
safety and, more recently, program manager for the Union Station
Transit-Secure Program as she stands in front of six large video cubes
still under protective wrapping. The screens will serve up CCTV footage
from Union Station cameras to the security operations centre, which was
built to ULC standards. A separate emergency operations centre will
provide a place where all transportation stakeholders and emergency
personnel can gather in the case of an emergency.

“This has been the most challenging project of my career,” says Fraser.
“This is the busiest transit hub in Canada — it handles more people
than Pearson.”

The daily commuters who come and go through the Front Street hub each
day have no idea what’s been going on at Union Station for the last
year. On this particular day as she tours the facility, Fraser is
mindful that there are 20 working days left before her team and the
construction workers hit their March 31 deadline. It’s been etched in
her mind for months now, ever since she signed on for the project.

The City received funding of almost $16 million dollars for the
station’s security upgrade, with Transport Canada providing 75 per cent
and the City of Toronto funding 25 per cent of the total project costs.

The project includes security applications and improved resources that
span physical security enhancements, emergency plans, and training to
help deter, detect, respond and recover from potential terrorist
incidents. It also meant providing training for Union Station employees
and tenants, to address skills and awareness. A “See something, say
something” campaign was launched, encouraging people to report
suspicious behaviour.
Fraser has been guiding the project since she first heard about it when
she was on maternity leave following the birth of her son.

Prior to landing the Union Station project, Fraser, 34, who started her
career as a security officer in 2001 in the Social Services division,
is a Certified Protection Professional, Certified Security Project
Manager and a Certified Protection Officer, held a security position in
the social services department of the city, but when she heard about
the project to secure Union Station she contacted her boss, Dwaine
Nichol, manager of security and life safety and in August 2006 asked to
be transferred to the project.

She knew she wanted to the job and returned to work in January 2007 ready to tackle the project.
“I knew this project would be very interesting for me,” she says.

Since then she has been the project manager at Union Station,
responsible for getting consensus from the multiple players involved
including Transport Canada, GO and TTC.

“I knew that Silvia had strong security project management skills, but
what I was most impressed with was her ability to form and enhance
strong relationships with our partners and external stakeholders. For a
project of such great scope and with a short timeline, it is amazing
that Silvia was still able to be flexible, empathetic, and display all
the qualities of a great leader,” says Nichol.

Historical influences
As a Parks Canada heritage building, Union Station fell under many
requirements for historical structures. The City of Toronto’s Heritage
Preservation Service was also part of the approval process. Fraser
hired an architect specializing in heritage properties: Goldsmith
Borgal and Company Architects of Toronto. Even paint colours had to be
matched with the original paint on the walls in the office areas. The
team couldn’t get a building permit until the heritage approvals were
met.

“I think one of the greatest challenges of my career has been to manage
the complexities of the transit-Secure program at Union Station as
Canada’s largest commuter hubs while juggling the heritage approvals
for the physical security enhancements and managing stakeholders
expectations,” says Fraser. “The heritage approvals took nine months.
Everything we touched had to be approved, but they never said, ”˜You
can’t put a card reader there’.”

Using her project management skills accumulated over the years, Fraser approached the task strategically.
“When I was assigned to work here I created a master plan to implement
these measures. It spelled out strategies on how to manage it and align
it to the city as a municipality,” she says.

Implementing over $16 million dollars in security enhancements over
only two years in a National Historic building, in a major
transportation hub without impeding commuters and normal operations of
the building, was not a cakewalk. It involved monitoring and
controlling the budget, keeping an eye on the scope and schedule of the
project.

The project was funded under Transit-Secure — part of a national
security program created under Transport Canada to increase
transportation security. The funding was announced following attacks on
rail transit over the last three years in cities such as Madrid, London
and Mumbai.

The Transit-Secure program is terrorism-specific, but the enhancements
also help protect the facility from other types of potential crime.

“We are doing our due diligence to mitigate the risk of such an
attack,” says Fraser, who went to New York City’s Grand Central station
to look at that city’s rail security operation.

Hybrid, not hype
When it came to planning out the CCTV system Fraser took a conservative
approach and went with a hybrid system over an all-new IP system.

“The system is not IP at this time, but could easily be switched to
full IP in the future. The key is redundancy and that is built in
through the dark fibre,” she says. “This is a major transportation hub
and we had to look at how we would support it (an all IP system). For
me, IP is an emerging field of CCTV and we’re not ready to throw the
switch on IP and say, ”˜Let’s see what will happen. It’s not just about
the technology; it’s about being able to support it over time.’”

In fact Fraser is not alone in the decision to go hybrid. A recent
Frost & Sullivan report indicates that the greater trend right now
is toward hybrid systems.

“A lot of people have analogue systems installed and they want to
gradually move into new technology so hybrid makes the most sense as
far as end-users are concerned,” says Dilip Sarangan, a security
analyst with Frost & Sullivan’s Security Practice.

In fact Frost & Sullivan have been tracking the crossover from
analogue to network-based systems for a couple of years now and
predicts that 2012 will be there year when more than 50 per cent of the
systems will be network-based.

“The security measures involved elevating the operational security
levels to support the security enhancements and Andrew has done a great
job,” she says.

A general schematic design of the security system was created by the
City of Toronto team and then Kevin Parisien, project manager with MMM
Group, did the detailed design before integrator Johnson Controls came
on board.

“This project was about managing multiple projects towards the same
goal — passenger safety and protection of critical assets and
infrastructure being the main focus. Program management is concerned
with doing the right projects, whereas project management is about
doing projects right. I am using PMI (Project Management Institute)
standards, City standards and previous training in project and program
management,” she says.
The successful completion of this program lies in the planning —
developing a program master plan and roadmap that proved to allow for
budget increases, addition of projects and their implementation in a
cost-effective, responsible manner.

Fraser says the project always had the support of City Council, the
executive management team and the stakeholders including Transport
Canada, Parks Canada (for heritage approvals) and the Union Station
stakeholders: GO Transit, VIA Rail and retail tenants.

“We all share the same goal: security of the station is all of our business,” she says.