News Campus
U. of Windsor’s integrated approach to security and emergency management 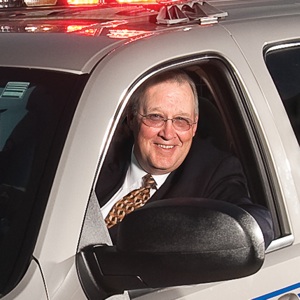 Robert Cowper surveys the sprawling 51-hectare campus at the University of Windsor and proudly talks about how far his security department has come in the last few years.

In some respects, Cowper, the executive director of Campus Police &
Parking Services, is the envy of campus security directors across the
province when it comes to the systems he has put in place. He’s
especially proud of the fully equipped Chevy Tahoe campus police
vehicle that could also serve as an emergency command vehicle for the
campus.

The vehicle contains a defibrillator, maps of the campus, a Panasonic
ToughBook laptop computer to receive and transmit video — everything
frontline staff would need to run an emergency operation.

Considering where the university is located in the City of Windsor,
security is a concern beyond the common campus issues of pub brawls and
property thefts.

Looking out of his office window, Cowper can see the Ambassador Bridge.
The University of Windsor sits on the Detroit River. The school is also
15 minutes from Michigan’s I-75. A parking lot and major buildings are
positioned right beside the bridge. “Because of the traffic and truck
volume on the bridge and the traffic in the river, the Ambassador
Bridge presents a major terrorist target,” he says.

There’s also a railway line that cuts across the north and south
boundaries of the campus with the school’s stadium on the south end of
the campus.

“We definitely have some unique geography.”

Cowper arrived at the university seven years ago in May 2002 after a
30-year career with the Windsor police service where he retired as a
staff sergeant.

“I didn’t have a camera on campus; I was driving an old van and the
uniforms were out of date. We didn’t have proper staffing, my travel
budget was $400 and my training budget was $2,000. We had a 911 centre
but it didn’t have a proper records management centre, didn’t have
taped telephone lines, or back up generator to run the programs it had
to run."

Cowper was not alone — for the most part a similar scenario existed at campuses in the province.

“When I arrived, there was really nothing here and nothing much at
other campuses in Ontario. The thinking was, ”˜We’ll just call the
police, or call the fire department,’” says Cowper.

“When you start really looking at your institution, as with other
mid-size universities, it’s really a small town here — 16,000 students
and more than 2,000 faculty and staff and surround it by an urban
campus where a majority of my students live in student housing all
around me. We’re a small city — we have two Tim Horton’s and two bars.”

Following incidents involving school campuses in Canada and the U.S.,
such as Virginia Tech and Dawson College, the pressure to improve the
level of security and safety at universities across the province began
to mount. Cowper has become friends with the chief of police from
Virginia Tech and has learned directly some of the lessons from that
incident.

“He went through hell and that can that happen to any of us. I think
the understanding we all have now is it’s not really a mater of if it’s
going to happen but when any of it will happen.”

But progress has largely been driven by the university security
departments to come up with a plan and execute. “It woke everybody up.
The Ministry of Training, Colleges and Universities sent a letter out
after Dawson College saying, ”˜We hope all universities and colleges are
doing their utmost and due diligence in emergency planning.’ When we
saw that I said, ”˜Gee thanks, where’s the money?’”

After the reality sank in that if something wasn’t done to address the
lack of planning and systems in place, the public outcry would be
deafening, in 2008 the Ministry coughed up some infrastructure money
and cash for security on campuses.

Today, Cowper has eight more staff than he had in 2002 and an
integrated department that includes some of the latest technology being
used on post-secondary campuses. Cowper is past-president of the
Ontario Association of College and University Security Administrators
and sits on the International Association of Campus Law Enforcement
(IACLEA) Accreditation Commission as the Canadian representative.

He is recognized for the work he has done to integrate old and new
security systems into one system that addresses both security and
emergency management.

The school’s UWindsorAlert, can transmit critical information to
members of the University community during a major emergency. It allows
for simultaneous alerts to be sent in minutes through text messaging,
voicemail and email to numerous devices, such as cellphones, landline
phones, fax machines and PDAs. It provides students, staff  and faculty
with an additional layer of security and protection in emergency
response, in conjunction with established emergency communication
methods, such as university-wide broadcast emails, online updates via
the UWindsor homepage, coordinated use of public media outlets, and
public address systems.

“We had to be doing a whole lot more than we had been — we couldn’t, in
an age of technology and information and CNN, say, ”˜I didn’t know what
we should do.’ There’s too much out there to tell us what we should be
doing.”

Cowper also invested in Asvaco risk assessment software as well as
EmerGeo (a GIS-based engine that sits on top of WebEOC and integrates
with the school’s camera system), and MIR3 Emergency Notification
Software Services.

The integration of all of those technologies into one application —
CCTV, emergency management software applications; mass notification and
the PA systems; geo-mapping with EmerGEO integrated into WebEOC — had
never been accomplished in a university setting. Before any of that can
happen, schools have to have their cameras, access control, key
control, incident management and emergency notification in place and
ideally, a risk assessment is conducted first.

“How the University of Windsor has taken it beyond anybody else is by
getting those systems in early and then saying, ”˜Where are the rest of
our holes?’ Th e problem is, the universities are behind what most
corporations are doing and haven’t had their threat-risk assessments
done,” says Cynthia Weeden, president of FutureShield.

“Bob put process and technology behind it.”

Of course, putting it all together effectively required a dedicated team that included the school’s IT department.

“We have an exceptional relationship with IT. I’m lucky enough here we
have somebody like (UW Sgt./emergency preparedness coordinator) Chris
Zelezney who works closely with IT. Back when we started with our
camera project we learned together,” he says.