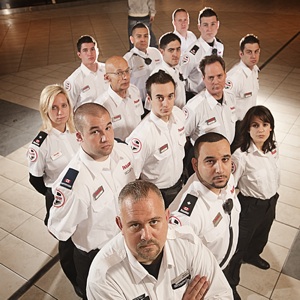 Dufferin Mall operations manager Byron Penney talks enthusiastically about the renewed popularity for the shopping centre located in what used to be one of Toronto’s least attractive shopping districts.

“If you’re here on the weekend and driving north on Dufferin Street
people are coming out of the subway flocking towards Dufferin Mall,”
says Penney. “We have 12 million people walking through this mall every
year.”
It’s been quite a turnaround for the shopping centre that some used to
refer to as the “ghetto mall.”

In fact the management has taken to marketing the mall with a sharp,
candid approach. The mall’s new slogan is “Dufferin Mall: Really.”

Dufferin Mall is a 567,000 sq. ft. centre with 120 shops and services
located in Toronto’s west end, west of the Annex, a block south of the
Bloor subway line. It is the second urban mall in Toronto — the first
being the Eaton Centre at Yonge and Dundas. For the last year the mall
has been focused on a public relations campaign to make it appear more
upscale, but at the heart it is still a gathering place for the
surrounding community. In with the new H&M and Winners stores are
offices for the Catholic Children’s Aid, Costi-Immigrant Services and
Abrigo Centre for youth services. The mall has been in the community
since 1956 and many of the residents have been life-long customers.

“Even though it is a mall, I look at this as a giant community centre.
People come here and shop and a lot of people live around here and walk
or come by subway,” says Mary Alkerton, general manager of the mall.

Every day Mitch Boyle and his staff meet people who have lived in the
neighbourhood all their life. The role of the mall in these people’s
lives plays into how Boyle, supervisor of security at Dufferin Mall,
part of the Oxford Properties Group, and his team deal with customers
if there is an incident.

And the security department has dealt with some major issues including
fatalities, fires, floods, power failures and medical responses, not to
mention a high crime rate.

“We’ve had situations where we’ve had to ban people and they say, ”˜you
can’t ban me I grew up in this mall”¦’, or they’ve had their
prescription on file in the mall for 20 years. That has to be taken
into account when we’re having a negative interaction with somebody,”
says Boyle.

To get resources to help battle the issues of crime, Boyle started
keeping stats during his first six months on the job going back to
2003-2004. He discovered quickly that in just under 50 per cent of
cases of violence at the mall the security team had become involved.
That led to an investment in the department for training, equipment and
staff selection criteria.

His statistical analysis also revealed where and when 80 per cent of all vehicle theft was happening on the property.

“It allowed us to sweep the problem off the property through dedicated
security details and we modified our patrol program to keep the problem
away,” says Boyle.

When Dufferin Mall began its $11 million physical redevelopment in
2006-2007 the mall embarked on a facelift, in part a response to the
gentrification happening in the community. Housing prices and household
income were on the rise.

The management team also saw it as an opportunity to change the way the
security department operated and the mandate it would have within the
community.

“In shopping centres today we have to look at ourselves as small towns.
If you think of that 12 million in foot traffic it’s important that
security have a high profile so that the customer feels safe and
secure,” says Alkerton. “One of things that was so important was
getting the right security person in place and the programs that go a
long way to making sure the customer and the tenant feel safe and
secure. That makes it a true success story for Dufferin.”

“If we don’t have a safe and secure environment people will not come
and shop. I think any kind of incident that would have happened before
— whether it was shoplifting or car theft — those things all
contributed to the perception and image of the property and keep people
away.”

Behind the scenes, the security department had already been undergoing a transformation of its own.

“We started the redevelopment of the security team prior to the mall
redevelopment,” says Boyle. “It was really early 2004 and the mandate
started coming from management for security to take on a bigger role in
the centre than it had in the past.”

Management saw the potential in the shopping centre and knew security had to be a focus.

“Oxford said they wanted their malls to be the safest and the cleanest,
so that really put the security department in the spotlight,” says
Boyle.


A security office was established off the food court area and 40
additional cameras were added to the CCTV system. Boyle also changed
the profile of the security guards working at the mall. They were to
have skills that would make them more community-like ambassadors with
good verbal negotiating techniques.

“What I’m looking for is good people with good morals; people who are
smart. Some of my best people had never done security before. They were
eager and willing to learn and be part of the team to support our
tenants, visitors and management.”

Dufferin Mall contracts its security guards from Paragon Security but
the team is very much one that is dedicated to the tenants and
clientele of the shopping centre.

“It’s a 100 per cent partnership between Oxford and Paragon,” says
Boyle. “They are part of the Dufferin Mall team. I train and coach them
as if they worked directly for us.”

To get the security team to a level of skill Boyle had determined was needed, the mall provided a new training program.

“When I first got here training was a four-day process. We upgraded
that to four weeks of training for a new guard and made sure they were
getting all their training from the same person and it was
standardized,” he says.

Guards were also given a modest pay increase.

Today, patrol for a guard at Dufferin Mall now involves talking to
people, talking to tenants and visitors. And it has paid off.

Boyle nominated his team for an ASIS Toronto Frontline Security award
this October and they won largely based on the statistics Boyle was
able to provide documenting the department’s successes. For example,
2009 stats versus peak stats from 2005 show that overall crime at the
mall is down 29 per cent, theft of autos is down 81 per cent, theft
from automobiles is down 71 per cent and all forms of violence is down
47 per cent. The total crimes against customers is down 37 per cent
since 2005.

And the team’s hard work has also been recognized by law enforcement.
It has won six Community Member Awards from the Toronto Police Services
Board — two for observations that eventually led to the laying of first
degree murder charges, and four for its response to an on site fatality
(evidence preservation).

They have also won nine Taking Ownership Awards (eight local and one national) from Oxford Properties.

The main tool used by security, says Boyle, is communication.

“If we have an incident at a store we’ll have three or four people from
our team follow up with the manager — that’s part of the patrol. If we
see someone who has current business with security we’re not going to
shun them; we want to let them know your problem is important to us,”
says Boyle.

Security is viewed as a critical business element that contributes to Dufferin Mall’s “well being” and the bottom line.

“Can you image someone coming into the mall and wondering if their
safety is in question? Compare that to today when you walk into the
mall and it’s a wonderful place to be. It’s definitely raised our
profile,” says Penney.