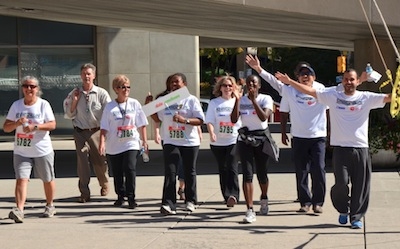 The event, held on Sept. 26, drew more than 200 participants, who walked, ran or cycled a 10 km route through Toronto. Ambitious athletes could take part in a 100 km bike ride or an 84 km Ultimate Challenge Run either solo or as a tag team. Participants represented more than 30 city divisions/sections, city councillors and organizations such as the Toronto 2015 Pan-am/Para-Panam Games, CUPE Local 79 and Toronto Police Services, as well as police programs Pro-Action Kids and Music! Not Mischief!

“The 2013 Corporate Security Civic Run was a huge success!” says Silvia Fraser, event organizer and supervisor, business strategies and security risk management unit, from the city’s corporate security section. “I would like to especially thank ASIS Toronto Chapter and CANASA (the Canadian Security Association) for their sponsorship and support. This was a great security awareness and engagement effort across the community, security industry and public service. I am very proud to create and lead this initiative. I could not have done it without a great organizing team and 30 volunteers who made this possible through their great efforts.”