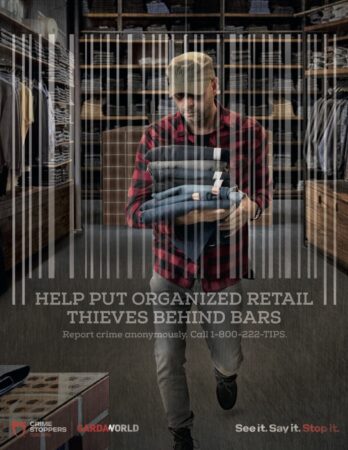 Toronto Crime Stoppers recently launched a campaign to raise awareness of the growing impact of organized retail crime, indicating that the common perception of these crimes as “victimless” is false and misleading.

According to retail and loss prevention experts, they can include elements of violence and intimidation against retail staff, as well as other costs than ultimately transcend the value of the stolen goods.

Shoplifting “has evolved into a more lucrative criminal enterprise,” said Sean Sportun, chair of Toronto Crime Stoppers, at a press conference held recently at Toronto Police headquarters. “Organized retail crime continues to be a growing concern for retailers across our city, across Canada, across North America, and even internationally.”

Rui Rodrigues, executive advisor, loss prevention and risk management, Retail Council of Canada, also noted an uptick in the volume and severity of retail crime across Canada, particularly in the last few years.

“What we hear mostly from businesses when they talk to the Retail Council of Canada is not about necessarily just the shoplifting — and of course that’s going to be an issue that we’re always going to be dealing with — it’s really the increase in violence and prolific offenders that we’re seeing,” he said.

The new Crime Stoppers retail theft campaign, the organization’s first since 2013, features the tagline “See it. Say it. Stop it.” and includes advertising, a social media presence and public service announcements.

“The Toronto Police Service is committed to supporting Toronto Crime Stoppers, and we will continue efforts to improve community safety by raising awareness about organized retail crime, and importantly, the ways to report criminal activity anonymously through Crime Stoppers. Community safety is a shared responsibility,” said Demkiw.

Sportun noted that the impact of retail crime goes beyond shoplifting and the costs borne by the retailer. Stolen goods, including health products and baby formula, are repackaged and resold without concern for their original expiration dates, creating a potential hazard for the consumer, he said.

Moreover, the proceeds from retail crime are often used to fund other criminal activities such as human trafficking, drug trafficking and gang activity.

Listen to a podcast interview with Rui Rodrigues on trends in loss prevention and retail security.