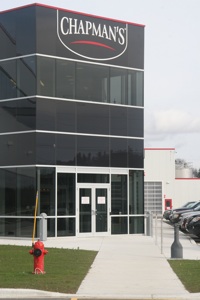 When a fire destroyed the Chapman’s Ice Cream plant in Markdale, Ont., more than two years ago, company owners were determined to rebuild. But they were also determined to make some changes.

For one thing, the new building would have as little wood as possible. For another, their new locking system would be tougher and more reliable than their last one. For, while making ice cream may seem a lot of fun, getting the security right is serious business.

“There are certain hazards,” says vice-president Ashley Chapman. “Chemicals, for example, are around in our lab, which we use to test the product. They’re highly flammable, corrosive. You don’t want anyone accessing that stuff. We have a lot of sensitive areas where we needed a controlled intelligent access system.”

At the same time, when your buildings are always cold and wet, finding reliable locks isn’t easy. In fact, he adds, the locks in their previous system became a bit of a nightmare.

“They had an exposed metal circle, and we found that was not good for our application. They would corrode easily,” Chapman says. “We’re a dairy plant. So there’s no way to get around the moisture.”

For their new access system, they decided on something new; so new, it wasn’t even on the market yet — the AD-300 locks by Schlage. Scott Kittell of Kitchener, Ont.-based Knell’s Door & Hardware, which designed their system and specified all the doors, frames and hardware, had arrived soon after the fire with samples of the locks.

“This system was just being launched, and we didn’t want to put something on that was going to be obsolete in a year,” says Kittell, systems integrator and Architectural Hardware Consultant. “I believe it was one of the first systems in Canada of this nature. And if not the first, at least the largest.”

The system is almost keyless. There are only a dozen mechanical, master keys, and only senior managers use them. Employees have fob keys, which to gain access they touch against a reader faceplate. The fob key is a small, teardrop-shaped piece of plastic that can be carried on a keychain.

“They’re not indestructible,” says Chapman. “We’ve played around with them to see how much they can take, and they are really tough, these little proximity fobs. And they have enough metal in them to be metal detectable, which, for us in a food manufacturing plant, is very important.”

With the AD-300 series of locks, the access system is contained entirely within the door, says Josh Weidman, director of business development at Ingersoll Rand, the project vendor. There are no separate readers or switches to build into the wall.

Taking advantage of the need to rebuild, Chapman’s installed the access system during construction. As each stage of building was completed — a group of doors installed, walls and frames finished — Knells would come in and work for a couple of weeks, installing locks and then, door by door, programming and testing each one. Then they’d stop to let construction catch up. Construction staff and tradespeople were given proximity credentials, so they could access the areas they were working on.

“The old approach,” Weidman says, “would be to run the electrical as part of the general construction project and, as you got closer to being ready for opening, the security team would come in and lay the security solution on top of what had been constructed. But now, the installation happens as soon as you put a lockset on the door. Your security system is installed.”

Chapman says the new locks, which have now been in for nine months, are light-years ahead of the last generation of locks they had before.

“They’re excellent. [Ingersoll Rand] really did their homework. There are a lot fewer moveable parts, and they truly are a water-sealed locking system. We’ve only had one break so far, and I’m pretty sure somebody hit it with a forklift,” he says.

The system is completely hardwired but can be converted to wireless. “When you’re building from the ground up, you might as well do it properly. That is the best way,“ Chapman says.

In place of the lost plant, Chapman’s built a 165,000-sq.-ft. manufacturing facility, which they call Phoenix. They also have a smaller production facility (for nut products), a dry goods warehouse, a wastewater treatment plant and a large distribution centre. All have been integrated into the one system and are controlled from central locations.


The project, Kittell says, touched every aspect of their company. A door and hardware distributor, Knell’s owns a hollow metal fabrication plant and also distributes architectural hardware and industrial supplies. Every one of Phoenix’s 200 doors and frames had to be custom made.

“We had to adapt custom hollow metal frames for most of the doors in this building because they were constructed of a freezer panel — metal skins filled with Styrofoam, like a large freezer,” he says.

“We also had to deal with wet environments in a lot of areas where they hose down an entire room several times a day. So all of the equipment had to be rated for that application.”

The software system is Schlage’s Security Management. The main IT server, one of three in Phoenix alone, takes up an entire wall. “It’s a monster wall,” Kittell says, “26 feet of control panels and power supplies.” The software is the deluxe version, and Chapman’s IT staff, who handle all the cameras, received training from Knell’s on managing it.

“They see the status of all the locks as they are being used,” says Kittell. “They see live who’s being granted access or who’s being denied access. It also monitors all the equipment in the system to let them know that everything’s communicating properly.”

While the deluxe version was more complicated than they needed, Chapman says, it has many useful features. By pressing a few buttons, they can do a total system lockdown. They can also run a report off the software to learn which doors a particular employee has accessed within a given time.

More importantly, he adds, they can program staff access according to complex requirements. Maintenance employees, for example, who don’t have the licence certificate, Refrigeration B, required to work with refrigeration are locked out of those areas that contain refrigeration controls.

Keeping the company, and customers, safe was another reason they wanted a secure system, Chapman says. Sabotage is always a major concern. The company makes nut- and gluten-free products, and their packaging says so — which presents an obvious way for an employee, who may have been fired, to take revenge.

“Who’s to stop him from leaving work at midnight, when his shift is over, and coming back at 4 o’clock in the morning, sneaking onto the floor and throwing peanuts into something and killing some children?” he says, explaining the software allows them to cancel a person’s keys the moment they’ve been fired or have quit.

“It’s hard to believe, with something as happy as ice cream, you would have to worry about these things. But you cannot be too safe.”

Safety is also a major issue in the food industry today, Chapman says. Companies must be able to comply with an ever-growing number of standards, or Global Food Safety Initiatives (GFSI). Firms must go through regular, severe audits, he adds, and grades determine the number of contracts they get, so directly affecting revenue.

The auditing scheme at Chapman’s lasts three days and, in addition to covering documentation and history, also includes a floor inspection. Last time, the auditor grabbed an employee at random out of the line and took him to the chemical storage to see if his key would work.

“Luckily for us, it didn’t,” Chapman says, with a laugh.

While most of the work is done, there are still some minor installations, all retrofits. “We’re still on site, adding things occasionally,” Kittell says.

After the fire, in September 2009, Chapman’s converted their dry goods warehouse into a production facility and kept everything going from there until construction on Phoenix was finished. They moved into their new facility only in August.

“It’s a real testament to them,” Kittell says. “Through all of this, you’ve still seen Chapman’s ice cream in all the grocery stores.”