Shattering the myth of corporate security 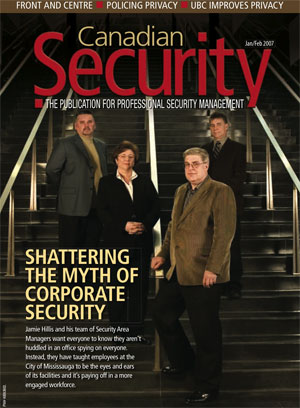 Jamie Hillis and his team of Security Area Managers have made it known they aren’t huddled in an office spying on everyone. Instead, they have taught employees at the City of Mississauga to be the eyes and ears of their facilities and it’s paying off in a more engaged workforce.

Mississauga, Ont. is probably best known for its outspoken and
long-time mayor, Hazel McCallion. But the bedroom community that merges
with its hulking neighour Toronto via Hwy 401 has grown rapidly in the
last decade to become the sixth largest city in Canada. It is home to
affluent neighbourhoods and high-tech companies such as Microsoft
Canada and Hewlett-Packard which have chosen it as the location for
their Canadian headquarters. Its population is more than 700,000, and
today, Mississauga has some big city problems, including the
over-crowded transit system and clashes between ethnic groups that
sometimes flow over into city community centres, creating challenges
for Jamie Hillis, manager of security and operations, and his team of
security area managers, or SAMs.

He had a solid security background, but Hillis wanted to make the jump
to facility management. He arrived at Mississauga when the Living Arts
Centre opened in 1997 and while he came as operations manager, because
of his background they asked him to take on security as well.

Transit challenges
Rapid growth in a city like Mississauga puts pressure on services in
many ways and some more than others, such as transit. The terminals
that serve buses in the city are handling more people than when first
planned for by the city. In particular, the City Centre Transit
Terminal on Rathburn Road, which wasn’t built to handle the more than
100,000 people that flow through it every day. It’s a gathering point
for everyone coming to the Square One shopping complex as well as those
who perhaps don’t have a particular destination.

“We’re getting more and more involved with transit and we want it to be
a proactive approach, not reactive,” says Cathie Evans, security area
manager for the central area of Mississauga.

Hillis is hoping that, by the end of February, the mayor and council
will approve additional funding for transit security that will mean
additional cameras on buses and increased security staff.

The security systems for the city run on the backbone of the city’s IT
infrastructure. The systems are monitored, controlled and programmed
from one administrative location — City Hall — which serves as the
electronic hub and location of the control room. The 24-hour control
room staff monitor CCTV systems that feed in from city facilities — 300
cameras monitoring 34 facilities. One third of those are Pelco PTZs.
All cameras are recorded on an Integral video recording system, with
units distributed throughout via the city’s IT network. (There are 99
facilities with DSC intrusion systems and 56 facilities on an access
control system.)

“All access control and CCTV systems are networked back to our security
operations centre, where, along with our intrusion systems, they are
monitored and responded to by City staff 24/7,” says Stan Pocock,
security area manager responsible for the electronic security systems.

All three systems are integrated, programmed and controlled from one
central administration location. Frisco Bay currently holds the
contract with the City for all system requirements.

The impressive camera and access control systems at the city help the
security team do their job, but in his time at the city, Hilllis says
the most successful strategy has been to break down the barriers of
communication between departments within the municipal structure and
get employees outside the security department to learn to become the
eyes and ears of the city and its facilities. There were 6,925 security occurrence reports last year.

“We’re about being proactive, not responsive. We feel we’ve evolved
past responsive into awareness and stopping things before they occur,”
Hillis says.

While he has a budget of $2 million annually and a sophisticated CCTV
system that is used regularly to assist Peel Region Police, Hillis says
his greatest resource his department has is the greater awareness and
communication with staff on a regular basis.

In 2003 the corporate security team, under Hillis, created a strategic
plan. The focus was placed on the city’s number one asset — it’s
employees.

“The idea was always to try and make our organizational structure as
flat as possible, so the only way to do that is to empower people and
give them full responsibility,” says Hillis.

In his experience in the industry, Hillis says security is often viewed
as separate and there is often suspicion about what security does.
“It’s always ”˜Who are they spying on?’ It’s seen as an internal audit
function,” says Hillis. “And I have certainly experienced that; in some
places I’ve worked, people have thought we had cameras that followed
them everywhere — there was a kind of paranoia that was rampant. We
don’t have any of that here and I think it’s because of our
collaborative approach. I think we have shattered that old paradigm.
Once you include people in their own security and the security of their
co-workers, it benefits everyone.”
This has been accomplished, says Hillis, through awareness programs and
proactive measures such as non-violent crisis intervention training.

With a history of suspicion around security, there’s one issue Hillis
really feels strongly about standing his ground on and that is not
providing video surveillance footage of employees to human resources
unless it is part of a planned investigation.

“If they are stealing time, no we don’t; anything to do with time or
labour — nothing like that. It has to be done officially as part of an
investigation.