In an effort to attract new talent, Seneca College launched its Challenge Accepted campaign over the summer of 2022.

Graduates of the college participated in a series of videos in which they shared their career successes and insights into the industries they currently serve. They also appear in large red posters now displayed throughout public spaces and on social media. 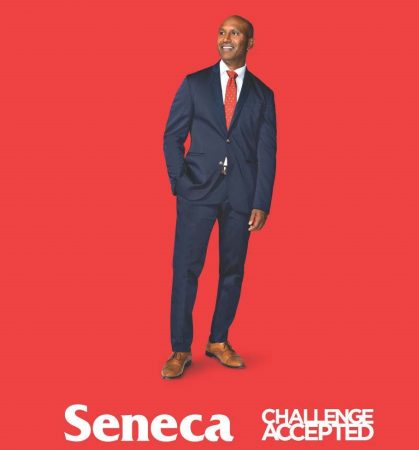 If you’ve navigated through Toronto’s bustling streets in late summer or fall, you might have seen one such poster featuring Mark Seenarine, security director at the Park Hyatt, on the side of a bus.

“Areas like public safety, law enforcement, and security are a priority at the moment,” says Gary Galbraith, who chairs Seneca’s School of Public Safety & Behavioural Studies.

“It’s important that we represent security as a great pathway in itself into wonderful employment opportunities, but also the way security can help people reach into law enforcement, correctional services and other areas as well.”

Seenarine successfully completed Seneca’s security and police foundations program in 1998. His reasons for participating in the college’s campaign extend beyond student recruitment.

“My hope for that campaign,” says Seenarine, “is when younger people of colour see me succeed in security and succeed at a big enough level where I’m on the side of a bus … they may say, ‘Okay, you know what, I could attain that.’”

In 1996, Seenarine acquired his first security role at the Woodbine Racetrack in Toronto’s west end while completing his studies at Seneca. He also completed a business administration certificate at Humber College later in his career.

Arielle Boshi also hopes to make a difference through her education. The student is completing her final year at Seneca’s honours bachelor of crime & intelligence analysis program. She believes sharpening her investigative skills can help shed light on corruption and hold the right people accountable.

“I looked at so many programs, and that was the only one that catered to what I really wanted — a lot of different, really cool courses that aren’t offered anywhere else,” says Boshi, who also studied at Seneca for her role as a youth outreach worker. She is also studying to acquire her private investigator licence.

Galbraith notes that employers in the fields of security and public safety value a commitment to lifelong learning and track records that indicate candidates can adapt to changes in the industry.

One of the key messages behind Seneca’s campaign is that the college is prepared to offer credentials for those wanting to develop new skills quickly.

Furthermore, Seneca’s campaign is using Seenarine’s example to educate prospective students on what it means to have a career in the modern security industry. “We just want to make sure students know the full range of opportunities they can explore,” says Galbraith.