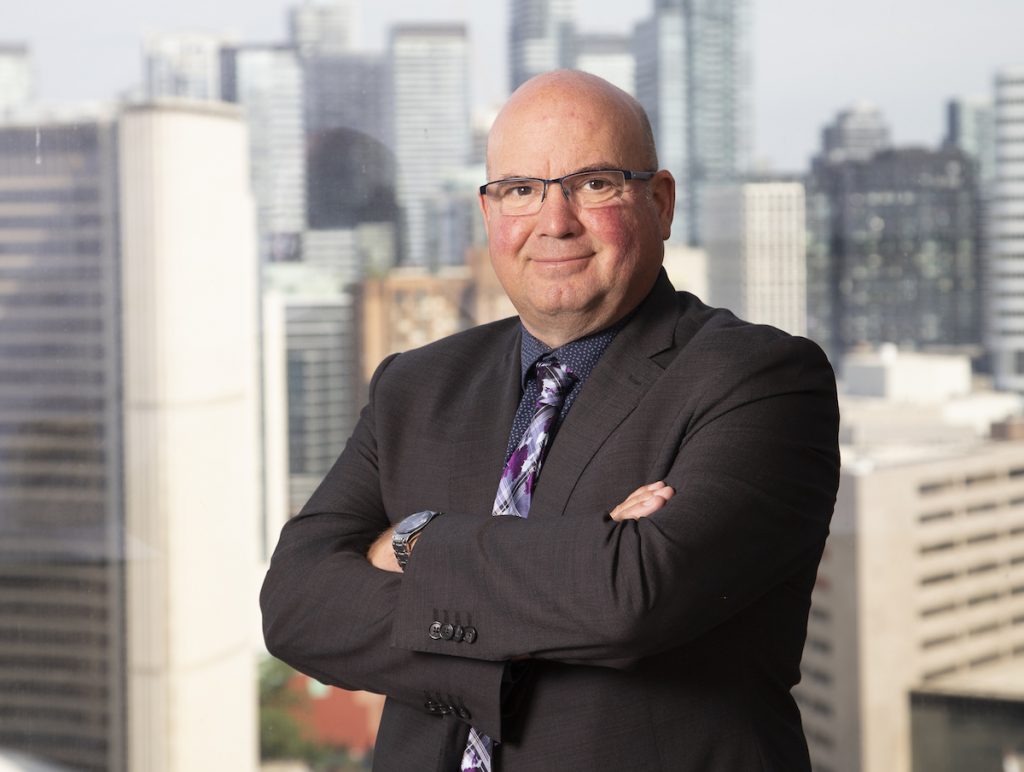 For David Sulston, security decisions are based not only on his collected wisdom, years of experience and professional judgement, but common sense.

Does the organization benefit from doing things a certain way? Can they be improved upon? Will a change ultimately make us better security professionals and more effective in our jobs? When the answer is yes, Sulston is committed and decisive.

Such was the case when he led his employer Oxford Properties Group through a project that would see many of the frontline security professionals on its premises wear body-worn cameras.

The results, after almost five years in the field, speak for themselves, says Sulston. In recognition of his leadership, dedication and project management expertise, Sulston was awarded Security Director of the Year 2022 by Canadian Security’s advisory board based on nominations that were submitted on his behalf.

David Sulston has built a 30-plus-year career managing security for assets owned by Oxford Properties, a Canadian multi-national real estate and property management corporation with a base of operations in Toronto and regional offices globally.

His first security role was a summer job as a guard while he pursued computer programming studies. “It was a lot of fun and I saw a lot of opportunity in it,” says Sulston. As he was promoted through the ranks he recognized a new career path was opening up and, he says, “I continued to enjoy the changing landscape.”

When Oxford Properties was looking for its first security director, Sulston added his name to the running. He was promoted into the role in 2008, and has maintained it to the present day.

He says one of his primary obligations back then was to oversee operations, as well as set security standards and processes for Oxford facilities — including industrial, hotels, multi-residential, commercial and retail — and then audit against those standards.

Two years before the pandemic started, he began to expand this mandate outside of Canada, building bridges into the U.S., U.K., France, Germany, Singapore and other geographies where Oxford has assets. The idea is to build standards around emergency management, occupational health and safety, and physical security. The ultimate goal is to write and implement global standards for Oxford that can be established as benchmarks.

The body-worn camera project entered Sulston’s orbit around 2015 when he noted that one Oxford property had already implemented them in a very limited capacity. Immediately, he saw the potential and was drawn to the technology as an effective means to act as an objective third-party witness.

“I put it forward to our executive steering committee and said, we need to do this,” says Sulston. “We need to bolster the professionalism of the industry [and] we need to protect our people, and dispel any issues on behaviour.”

At the time, there were few, if any, security departments or companies using the technology, he says. Police agencies, particularly in the U.S., tended to be the early adopters.

Sulston says he’s familiar with all of the counter-arguments and some of the initial industry trepidation about adopting body-worn cameras — you’re opening yourself up for unwanted scrutiny; you’re creating a permanent record that could come back to haunt you.

But all of these supposed drawbacks are actually the greatest strengths of body-worn camera technology, he maintains.

“Every 13-year-old has a camera and they’re taping everything,” says Sulston. And you certainly can’t control what they’re doing with that footage and where it will be posted. Bodycam footage, on the other hand, is “a verified and unredactable recording of what truly happened.”

Sulston championed the idea, emphasizing the huge potential upside. Once the project had received the necessary approvals, including a review of its privacy implications, it was put up for tender and a competitive process between various manufacturers of body-worn cameras. The vendor ultimately selected to supply Oxford with the technology was Axon Enterprise.

Sulston relied on the expertise of his longtime colleague Neil Mathews, senior manager of emergency management and business continuity at Oxford Properties Group, to help manage the body-camera rollout.

Mathews was hired in 2008 as a commercial property security manager by Sulston not long after he took on the role as security director.

Mathews says that Sulston has been a mentor to him throughout his tenure at Oxford, encouraging him and supporting him as he built his own career. The two have collaborated during some of the biggest security challenges of the last decade or so, including the G20 summit of 2010 and the Pan Am Games of 2015 when Toronto acted as the host city.

Sulston provides mentorship to other security managers within the organization, whether they report to him or not, says Mathews. They all receive encouragement to pursue professional accreditation and development, including certifications available through ASIS International. (Sulston himself holds Certified Protection Professional and Physical Security Professional designations from ASIS.)

The cameras were first rolled out in 2018 to properties where they could be of the most benefit, including retail locations. Originally, 175 body-worns were deployed and that number has risen slightly in the four years they have been in the field.

The cameras are assigned to shifts rather than individual guards, so they are shared. Once a shift ends, a unit is returned for charging and the next shift equips another one.

The cameras are toggled on and off by the wearer, who immediately notifies anyone in the vicinity if they are in use. Footage is managed via an Axon platform called Evidence.com where it can be retained and recalled if ever required for review or evidence. Footage can also be shared seamlessly with police agencies, particularly if they are operating on the same technology platform. About 23,000 evidence files comprising 5TB of data are currently being stored by Oxford.

The effectiveness of the cameras was immediately apparent, says Mathews. “We not only saw a decrease in the intensity of interactions between people but we also saw an increase in the professionalism of security officers.”

For Sulston, the technology is an extra layer of protection, both for the guards and for the organization. Almost all of the guards working in Oxford facilities are on contract from third-party providers. However, the adoption of body-worn cameras hasn’t significantly changed those relationships. “We’ve always had good relationships with our partners. I don’t see it as a massive change. It is yet another tool to protect their teams,” he says.

The body-worn camera project is one amongst many that Sulston had led, championed and sometimes delegated during his professional security career. Those who nominated Sulston — a group of colleagues that includes Mathews — spoke of his commitment to the profession and encouragement of those around him.

“You can pick up the phone day or night and talk to Dave,” says Mathews. He recalls a week when he spoke to Sulston every day and only later found out he had been responding from the Bahamas while on vacation. “That’s just the type of guy he is.”

Another more recent project championed by Sulston is guards carrying Nalaxone in select Oxford properties. The drug can be used to temporarily reverse the effect of opioids in overdose situations until emergency services arrive on the scene and administer medical attention. Again, for Sulston, this is a common sense case of simply being the right thing to do.