Security Director of the Year 2016: Creating the conversation 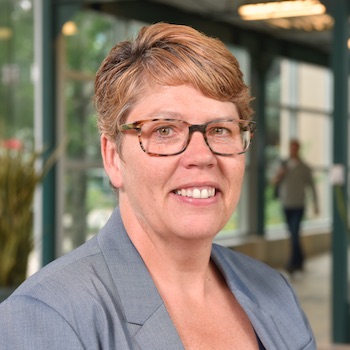 The Man Up Against Violence program started about three years ago in the University of Regina’s Kinesiology department with Roz Kelsey, a faculty instructor. According to Kesley, it grew from a desire to break apart the hyper-masculinity paradigm associated with sport — an issue that was raised at that time by visiting campus speaker Jackson Katz, an expert on gender and violence issues.

“This is ripe for discussion,” says Kesley. “Let’s make something bigger. We’re not having these discussions on our campus.”

From that impetus, the Man Up program was born and students and athletes were drawn to its potential and message. An early ally Kelsey sought was Patricia Patton, the university’s director of security and operations. A partnership was formed and Man Up took off.

Security Director of the Year
Patton is this year’s recipient of Canadian Security magazine’s Security Director of the Year award, sponsored by Anixter Canada. Patton was selected by Canadian Security’s editorial advisory board for a variety of reasons: Her role in championing the Man Up Against Violence program as well as a long list of other accomplishments in a security career that has spanned 30 years. Another factor that weighed heavily in the judges’ decision is that Patton’s award nomination was submitted on behalf of the university’s entire executive team.

Building a career
Patton has spent 20 years working in the University of Regina’s security department, first as a manager, then as a director, then as a director of both security and operations. During her time there, she has taken on increasing levels of responsibility — in many ways reflecting the changes that have come to professional security more broadly across the industry.

When Patton first took on her security role in Regina (she had 10 prior years of security experience at the University of Saskatchewan), she inherited a relationship with a contract security provider that was essentially looking after parking and after-dark duties. One the first major changes Patton implemented was to “bring them into the daylight,” she says. “We wanted people to see them; we wanted people to be more involved in the community.”

Patton was soon able to hire her own staff, augmenting then ultimately replacing contract security by building a team of 16 security officers (four teams of four). “We’ve been very successful, I think, in trying to demonstrate a need on campus. All universities right now are struggling with funding. This, to me, shows the support the university has for campus security,” she says.
A more recent hire for the security department was a personal safety coordinator — a position created in coordination with the university’s policy on sexual assault and violence.

Patton took on an additional portfolio in 2012, managing the university’s custodial services and labour crew — 78 staff in addition to the 18 dedicated security personnel she currently oversees (16 officers, safety coordinator and a manager of security operations). She also works closely with the university’s IT department, emergency preparedness coordinator and web staff in a variety of capacities, such as emergency alerting and mass communication services.

“The university has got quite good at being able to deal with various things,” says Patton. “That’s a co-operative effort — that’s a lot of people getting together and doing their part. The University of Regina is really good at that — people chipping in and doing what they need to do. It’s that co-ordination piece, and I think that’s where I’m able to provide them that little bit of extra expertise in my role.”

It’s this level of commitment and ability to expand the traditional security role that drew Kelsey to Patton and helped cement the partnership that has encouraged the Man Up Against Violence program to grow. What started as an exploration of hyper-masculinity in sport and its insidious impact on gender roles became more of a conversation about sexual violence prevention and safety on campus.

Growth potential
Teaming up with security was a natural fit. Patton joined the Man Up Against Violence advisory board as vice-chair, operations, and has been instrumental in its success, says Kelsey.

“It was the two of us working side by side to get this thing rolling. Me from an academic perspective and Pat from the security perspective. It meshes really well. We’re able to see a couple of different sides of it. She gets the logistics and the impact of this,” she says.

“The big thing about Pat is her uncanny, incredible ability to create relationships that are meaningful and that produce incredible results.”

Patton adds, “Universities are always looking for different ways of doing things, and as we are an academic institution, the whole idea of teaming up with our academic colleagues is something that the university is very supportive of. We’ve worked hard to keep our administrative aware and involved in what we do.”

What struck a chord with Patton was the MUAV program’s emphasis on prevention and the root causes of gender-based and sexual violence. “I saw this as a really grassroots base for us to build some prevention opportunities,” says Patton.

“I personally felt very strongly about how we could do things, but as we started to evolve, it became more clear that this could fit into making our campus safe. The issue of sexual violence on campus has really exploded in the last few years. So trying to find a way we could deal with this and not just put some Band-Aids on the problem seemed to be something we really wanted to focus on.”

Sharing the message
The program is now in its third year. The university has trademarked the name and recently supported an $85,000 grant which will help MUAV to continue to develop.

Patton and Kelsey were able to present opportunities offered by MUAV at the most recent conference held by the International Association of Campus Law Enforcement Administrators (IACLEA). Patton also serves as Canadian regional director for the organization’s board of directors and has volunteered for the group for more than a decade.

The conference, held this past June in Phoenix, Ariz., drew 375 representatives from post-secondary institutions across North America. The Man Up session was “well attended and very well received,” says Randy Burba, IACLEA president and chief of California-based Chapman University’s department of public safety.

“Sexual violence on campus is a huge issue in the States. I’m sure Canada’s no different,” says Burba. “In the United States, we’ve got studies that basically say one in four college women will be exposed to some form of sexual assault. In my particular state [of California] they passed affirmative consent legislation. It’s ‘yes means yes’ rather than ‘no means no.’ It’s absolutely timely and appropriate to find new and innovative ways and new programs to try to educate and reach students and try to drop those numbers.”

Next steps
What started as a school project evolved into a theme week on the University of Regina campus with student-organized events and an awareness campaign. The next step for MUAV will be to spread its message even further and the new funding will definitely be a boon to its development, says Patton. Its core message will remain the same, however: encouraging men to take an active role in violence prevention. “We want the young men to be able to speak out,” she says. “It’s a different message when a young man speaks out versus a young woman.”

Violence against women isn’t a comfortable topic in the best of circumstances. The way Patton handles and presents MUAV has been a major contributor to its growth and success, says Kelsey.

“In order to go outside of your comfort zone and feel as though you can be open to these discussions, I think that there has to be trust. I think Pat is very, very good at building a sense of trust,” she says. “Her mandate is she wants to make sure she has a safe campus for everyone.”

For Patton, MUAV has, in some ways, made the violence prevention conversation easier. “I think people are talking about it more openly,” she says, which also provides a safer environment for victims to come forward and share their stories. “It’s becoming a little bit more clear that they will be supported and they will be helped.”