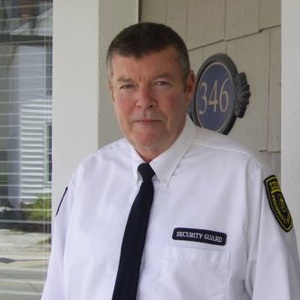 Bob Pusey is the winner of the 2008 Association of Professional Security Agencies (APSA) Security Guard of The Year Award. The 64-year-old guard works for Lyndon Security Services, and is based at the University of Western Ontario Research Park in Sarnia, Ont.

This is the first APSA Security Guard of the Year Award, and the winner couldn’t be more deserving, says Ernie Hehn, president and general manager at Lyndon Security Services. “When we initiated some discussion with various companies that work out of [Research Park] about Bob as a possible candidate they were all very anxious to support his nomination,” says Hehn.

Pusey was awarded for his innovation and initiative. Hehn says he showed leadership skills and motivation, while implementing various new plans to benefit the clients.

Pusey stumbled into a career in security eight years ago when he started working at Lyndon Security Services. “I was looking for work, and Lyndon was good enough to hire me,” he says. Before entering the security field Pusey worked his way around the world. He sold skis in California, was a greens keeper at golf courses in Hawaii, and in Guam, and worked at a tobacco plant in Australia.

After a life of travelling and dabbling in many industries and trades, Pusey found his way to the security industry.

In 2001, after starting his position at Research Park, he began to revamp the department and take on as many tasks as he could to help the company and its clients.

“I wanted to know what I was doing and some of the records had fallen behind the times,” Pusey explains, “I set upon digging through the old documents.” It is initiatives like this, Hehn says, that won Pusey the award.

Pusey also volunteered to change all the locks in the building, as well as re-do all the fire panels. He was also very active in starting a program that encouraged people to watch for, and report crime in the surrounding area.

Pusey says that one of his greatest accomplishments to date, is changing the EMS emergency route. He noticed that the ambulance was being called more frequently, so he mapped out a route for ambulances to take, with two ideal destination points, both at elevators, to better serve clients in the building. He describes a day when an employee at the building began choking in the courtyard, after taking the necessary precautions “the emergency vehicles came roaring in,” he says, they were able to quickly access one of the two destination points and help the employee.

APSA is making an effort to move on with new initiatives. “We’ve been dealing with a lot of changes and legislation,” he says, and adds that this is a great way to take a step in a new direction.

Senior officers, site supervisors, clients and management made nominations for this year’s award.  After three nominations were received a committee, which consisted of four APSA companies, Lyndon Security Services, Commissionaires, G4S, and Securitas, put forth recommendations for a winner.

“We want to make this an active program as we move forward, and hope that in the future every member of APSA will put forth a nominee.”

APSA wants to make an effort to recognize guards for putting in an extra effort, which would include being prompt for work, having great attendance, and being pro-active, Bennett says.

Pusey offers this advice to people in the industry, “use what you know, and find a way to apply it,” he says.

Pusey was named the winner of the Security Guard of The year Award on May 12. A ceremony was held in Toronto, Ont., in his honour, but he was unable to attend due to illness. An alternate ceremony will be held May 28, in Sarnia, Ont.

The award will consist of $2,000 along with a personal plaque. Pusey’s name will also appear on the APSA Security Guard of The Year plaque, which will be kept at APSA to record all future winners.