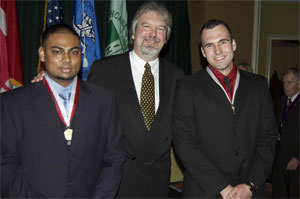 Two Rouge Valley Health System security guards were honoured at the recent International Association of Healthcare Security and Safety annual meeting in Toronto with the association's Medal of Valour.

Derrick Glennie and Davis Drepaul were recognized for their heroic actions last October  when they found themselves involved in a life-threatening incident while on patrol at Rouge Valley Ajax and Pickering hospital campus.

On Oct. 7, at around 4:35 a.m., Glennie and Drepaul were doing an exterior patrol of the southeast parking lot when they heard a man’s voice yelling, “I’m suicidal, I’m suicidal.” The man came out of the field to the south of the parking lot, holding a six-inch-long steak knife to his neck. Then the man took the knife away from his neck and made a motion towards the officers, who tried using positive verbal tactical communication. When the man eventually dropped the knife on the ground, they worked quickly to physically restrain him in fear that he would pick up the knife and cause serious bodily harm to himself.

A Registered Nurse, who was outside and witnessed the dangerous situation, called 911 on her cell phone. Glennie and Drepaul struggled with the man until Durham Regional police arrived at the scene. More than 10 police officers responded, and the man was finally controlled after the use of pepper spray and a police dog. He was subsequently arrested under the Mental Health Act, and was admitted to the inpatient mental health unit at Rouge Valley Centenary.

“It is thanks to the quick response and brave actions of security officers Glennie and Drepaul that tragedy was avoided that morning,” said Martin Green, Manager of Security and Parking with Rouge Valley Health. “They reflect the true spirit of Rouge Valley Health System, and the hospital is very fortunate to have them as part of the team.”