Knightscope, a maker of security robots, said patrols will resume at The Washington Harbour retail facility in Washington, D.C., following a recent incident where one of its drones took a tumble down some stairs and into a water feature. The drowned robot has since gathered a following online popularized by the hashtag #wearesteve and even its own makeshift memorial. According to Knightscope, the robot is not permanently out of commission and will live to roll another day. The company issued the following statement late last week: 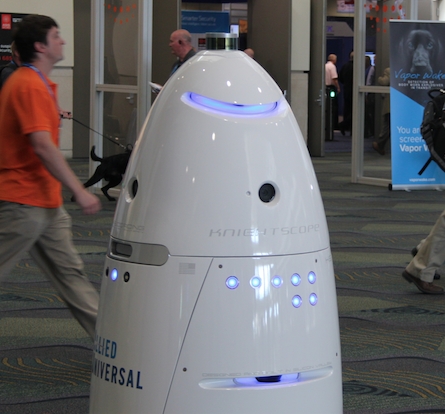 A Knightscope robot at ASIS 2016 in Orlando

K5 “STEVE” (Security Technology Enhancement Vehicle) is in critical condition and is being transported back to Silicon Valley to be put on life support. Retrieval and review of the “black box” is in-progress. K5 Machine Identification Number 35 will be taking the 24/7 post and is to be named by the community as standard protocol.

“The reports of my death are greatly exaggerated. I don’t remember seeing a “no swimming” sign. Thank you to all the human life guards that pulled me out,” said STEVE upon reboot.

“Our humans have the technology to rebuild him,” exclaimed MIN35 noting the hashtag #WeAreSteve.

Preliminary review of the data suggests no foul play, and no further comment is being issued at this time due to the sensitive nature of this active and ongoing investigation. You may follow STEVE and his recovery on Twitter using his handle @K5steveisalive.