Robert Clarmont looks back on 30-plus years with Paladin Security 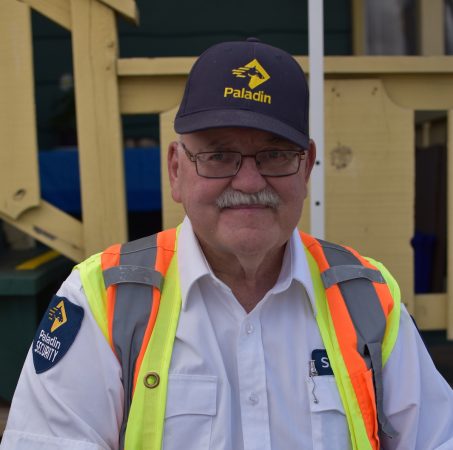 In 1987, when Robert Clarmont saw an ad in the paper for a security guard position, he made a promise to himself: if he got the job, he would stay until he retired.

The job was at Fibreco, a wood fibre export terminal in North Vancouver, which had a contract with Paladin Security. It was a promise well-kept, as Clarmont retired from Paladin earlier this year.

“Who would have thought that 34 and a half years later, I would be handing in my notice to say I was retiring?” says Clarmont.

Clarmont went through a number of interviews before he was hired, including one at president and CEO Ashley Cooper’s house, before Paladin had an office. Over the years, he held a number positions, including mobile supervisor. At the time of his retirement, Clarmont was a site supervisor at Fibreco.

“I always wanted to be a site supervisor,” said Clarmont. “Fibreco, for some reason, just liked me — the way I worked and the way I handled people and they just loved me there.”

When Clarmont started his career with Paladin, the security industry was not as advanced as it is today. Clarmont recalls the days of no two-way radios, cell phones or high-tech gear. “It was a lot of hard work,” Clarmont stresses. “The industry has changed so much since then –– there’s a lot of high-tech equipment being used.”

Established in 1976, Paladin was still a young company at the time of Clarmont’s hiring. During the early days when the company was still trying to grow, Clarmont recounts a conversation he had with Cooper that set him on the course for his career moving forward.

“I remember Ashley telling me, ‘Robbie, we’re just starting. you’re the one that has to lead by example and for this to work,’” Clarmont recalls. “So, that’s the way it was. He told me so many times over the years, ‘Robbie, when I needed something done, I could always depend on you and you’d get it done and not only get it done, but you did it well.’”

The admiration was mutual for Clarmont, who says that Paladin as a company was the best part of his job.

“We started out with only one site,” Clarmont says. “It was an opportunity to learn how to grow, see it grow from that, from practically nothing, and see how it evolved.”

Over the years, Clarmont built a reputation for himself for his courteous and kind demeanor, so much so that when he went in to the head office to collect his last pay, his CSM called him into his office and showed Clarmont his laptop.

On the laptop was a LinkedIn post about Clarmont’s retirement that amassed over 500 likes and received plenty of positive tributes and well wishes. As he went through the comments, Clarmont saw a lot of names that he did not recognize.

“I don’t even know who that is … I never met her in my life,” Clarmont recounts with a laugh. “I thought that was quite awesome.”

Recognizing that security is a people-oriented industry, Clarmont says that he made sure that he was always looking out for others and made a point to be kind.

“If I can make somebody happy and do my job at the same time, I’ve accomplished that,” Clarmont shares.

As for Clarmont’s retirement plans? Like everybody else, Clarmont is hoping to take a nice vacation. “I’ve been working in the workforce for 45 years – I deserve one good holiday,” Clarmont says with a laugh.

However, Clarmont is not closing the door on returning to Paladin to work two days a week. “I don’t even need a resumé!” he jokes.

While Cooper said at Clarmont’s retirement lunch that there will never be another Robbie, Clarmont has advice for those who want to join the security industry and build a career like he did.