Features Opinion
Rethinking use of force

The National Use of Force Model endorsed by the Canadian Chiefs of Police in the 1990s, is still widely used by police and security personnel alike as a training tool today. 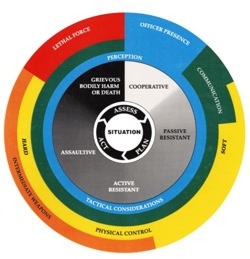 It is referenced in some mandatory security training requirements and even printed inside most notebooks carried by front line personnel. Bill C-26 recently removed sections in the Criminal Code relative to protection of persons and property and replaced them with re-written sections 34 and 35 that included criteria to be considered. These changes were aimed squarely at citizens, including security personnel.

Does the “model” really fully apply in a modern security work environment where interventions are expected?

The visual representation, the “model” itself, was intended to help learners to summarize use of force response options in a given situation. Wise trainers have always emphasized that the model in and of itself does not “justify or authorize” the use of force in any situation. The theory behind the model however, was very valuable in training intervention capable personnel. It only lacked the context of the security work environment.

The courts have repeatedly stated that force should only be attempted when all other options prove ineffective.  To paraphrase a recent court case: An arrest attempt may lead to a confrontation more serious than the initial offence itself. What may be determined to be “reasonable force” in a given situation, also must have regard not only to what force is necessary to accomplish the arrest, but also to whether a forcible arrest was in all the circumstances a reasonable course of action in the first place.

The Use of Force model was developed for three reasons. Firstly, to enhance decision-making training by providing a framework for analyzing the impacting factors involved in situations that required a response. The assumption was that if the responding officer could better assess a situation, they were more likely to select the most reasonable option.

The second reason was to help officers explain, after-the-fact, the process by which they selected a particular option(s) and finally, an important spin-off was to assist others in better understanding why an officer used force. Today, given the increased accountability in the security industry, it is accepted that the Provincial Ministries that license guards have the right to understand the rationale underlying an officer’s decision to use force or arrest. What is deemed to be excessive may result in the loss of one’s licence and ultimately their employment even without a criminal or civil trial.

In my opinion, the current coloured “model” itself is not as applicable today as it once may have been. Even the articulation behind the model is in need of a serious update in light of Bill C-26. Parliament recently expressed serious concerns, with regards to the potential of an escalation of violence, when ordinary citizens, including security personnel, are given the right to use force in furtherance of their private interests. It is now incumbent on the trainers and the industry as a whole to change along with the legislation.

Mike Burgess is the president of M.D. Burgess And Associates (www.SecurityTrainingSupport.com).