The suite, demonstrated at a virtual launch last week, is designed to reduce the time it takes to create incident reports, as well as improve data accuracy and cross-reference data to establish incident patterns.

The report writer is expected to tell a story in a narrative fashion when creating the report — the AI engine will automatically recognize details such as key actors, companies, dates, times, places, etc. and query that information against an established database.

Incident triage is “time-consuming, particularly if we’re being diligent about accuracy and making sure that we don’t create duplicate records,” said Resolver CEO Will Anderson during the live demo. “In many teams, workload means key pieces of information are not flagged, leading to missed connections or a failure to connect the dots. That’s the problem that Resolver set out to solve with our first in-house AI project.”

In the event that the report contains a detail that is not already know to the database, the reporter can amend and tag it as necessary; the AI engine will learn these details over time and with repetition, improving its recognition abilities with each subsequent report. A reference to a retailer, for example, could indicate a specific location or an entire company — tagging it as one or the other will enable the software to identify it correctly in future reports.

“The goal of all this is to remove work from your security team and ideally just completely automate triage, seeing as we already have the data in the narrative,” said Anderson. “Almost all the work we’re doing is codifying information that was already in the original report or is using that information to categorize and tag incidents with various flags and fields.”

A key feature is integration with Amazon Translate, allowing the report writer to input data in his or her preferred or local language, then have it translated into the organization’s operating language. The feature is designed to particularly appeal to corporate users that operate on an international level, according to Resolver, but is optional if it’s not needed or wanted. 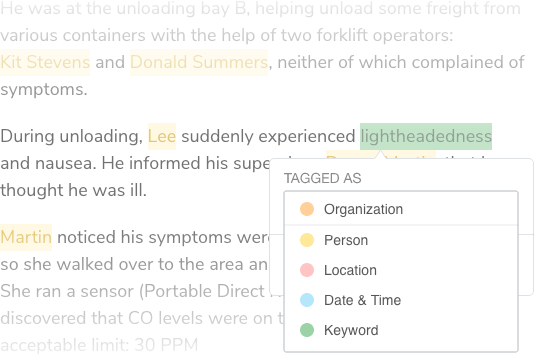 The new software is expected to be available to customers in early May. Future releases will be able to recognize more report data such as vehicles and monetary amounts. Resolver is also working on an algorithm to set up flags like weapon involvement and EMT response, which could automatically escalate an incident as a priority. Customers that have previewed the software have asked for the ability for the software to query the internet for specifics in addition to a closed database, said Anderson, so that could also be added to future releases.

“We want to help you do more with the resources you have and better illustrate the value you create for your organization. AI is not a be-all and end-all of this, but it is a powerful technology that we will harness to drive the industry forward,” said Anderson.

In addition to its new AI-driven capabilities, Resolver also announced an Integration Platform as a Service offering with pre-built connectors that would allow its software to integrate more seamlessly with other enterprise tools such as Servicenow, Everbridge, Slack and Salesforce.