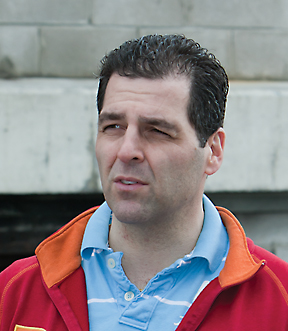 Smoke begins to fill the room and within three minutes it becomes difficult to see. Then power is lost and you are standing in darkness with smoke rising around you.

Between the smoke starting to fill your airways and the lack of lighting, you suddenly start to panic as you realize you have no idea how to get out of the room you are in to the ground level below.

A trained person would know you gather the people around you, form a line, try and stay low and place your hand on the shoulder of the person in front of you and using the buddy system start to move out of the room — towards the closest flight of stairs.

In this scenario, the stairwell is actually located in a smoke tower at the internationally recognized Fire & Emergency Services Training Institute located in Mississauga, Ont., next to Pearson International Airport. Simulated smoke is directed into either a section of the tower or throughout the building to enhance training scenarios. The dense theatrical smoke is generated from a water-based product, making it safe for training and education purposes.

It’s here that Cadillac Fairview has been training its corporate security and operations managers to learn important fire and life safety skills that could one day help save the lives of their tenants and members of the public.

It takes training to a whole new level — into the field.

At most facilities, security and operations personnel are responsible for quickly responding and assisting occupants in the event of emergency evacuation, and to support emergency services upon arrival. But how many in those roles know what to expect or how to anticipate what first responders will need on arrival?

“This program provides training — through real experience with insight from municipal first responders — on commonly encountered problems during e-mergency response. The information provided to staff will help save time, and streamline responses to limit the impact to operations. We are learning from the experiences of others and past mistakes — the return on investment and benefits can be shared by everyone including the financial impact to the bottom line in avoiding losses or shorter business recovery cycles,” says Cedrone.

“Some of the participants said they had never been in a smoke-filled stairwell and yet they are responsible for teaching tenants fire warden safety procedures,” he says. “In terms of education, as a society we do a really good job on fire and safety training through grade school and then we don’t tend to do it again, ever,” says Cedrone.

Cadillac Fairview has created a department of internationally recognized fire inspectors to enhance their ability to deliver programs to employees, tenants and customers.

“As far as we can tell, Cadillac Fairview is the only Canadian property management company to have implemented a reality-based training program giving employees the opportunity to experience, under controlled conditions, what a real emergency could be like. We have produced what we believe can become an industry best practice and a new way of training private security professionals,” says Cedrone.

Cadillac Fairview recognized three years ago that security personnel are really responsible for life safety, building evacuation and emergency management and created a program that incorporates reality training to give the trainers some experience in dealing with real situations.

Historically, security personnel have never pulled a pull station or put their fist through a piece of glass to expose a piece of equipment or access a fire phone or been in a stairwell under smoke conditions.

“Yet these people are informing clients in buildings across Canada on how to evacuate tenants from high-rise buildings. So where do they get the experience or expertise to train others? This is about protecting your people by enhancing their experience and skills to respond to real events while learning in a controlled, safe environment — that’s why we created the program,” says Cedrone.

Development of the program began with interviews involving 100 firefighters from one of North America’s busiest fire halls — Toronto’s Adelaide Street fire hall.
Each platoon was asked to provide a list of 10 challenges they faced when attending a fire incident at a facility where they had a negative exposure when responding to buildings, facilities and high rises. That feedback was documented and a training program was created.

By taking information garnered from these front-line professionals the course was created to provide tactical insight as to what property response teams need to be aware of and how to better prepare the property to receive emergency services during an incident.

Now, security and operations managers at Cadillac Fairview have learned what it’s like to stand in a stairwell filled with smoke and experience the challenges of finding their way to the stairs, they’ve had the opportunity to pull a pull station and push a crash bar to open an emergency exit door.

“Some of the challenges that we’ve found in fire drills is that some people may not have the physical strength to open these exit doors, and that’s the whole purpose of training — to identify those potential gaps,” says Cedrone. “We have security officers walking by fire hose cabinets and fire extinguishers and yet they have never been trained on how to safely deploy them.”

Now all Cadillac Fairview security managers in Ontario have had the training and the National Security team is reviewing the program to assess the viability of rolling the program out to the western and eastern properties over time.

When you consider the population of the Eaton Centre it is really like dealing with a small city in terms of the number of people who pass through it each day, the training is essential.

“The Toronto Eaton Centre Security and Life Safety team have set the standard for the company and built the program to where it’s at today,” says Cedrone.
Some of the gaps in training were discovered during planning for the G20 Summit last June, says Cedrone.

“Our close planning with the fire department revealed a lot of gaps that existed or were identified as a result of assumptions that we make as private organizations and that the fire department makes on the public side that we realized didn’t jive,” he says. “This training brings us together in terms of what our expectations are and what we can anticipate as private practitioners and develop a more cohesive approach to emergency planning.”

For example, Cedrone said it was assumed that if you evacuate a tower you have the people file onto the street below, but during G20 that wasn’t a realistic option, so they looked at filtering people through the underground.

Perhaps the biggest take away from the Cadillac Fairview experience is that it may be time for security managers in large facilities to start talking to their partners in fire services.
The program also extends to inviting fire services into the facilities that security is responsible for.

There have been 98 fire fighters come through The Eaton Centre on building familiarity sessions. Only 14 had been to the Eaton Centre in the last three years.

“What have we done for the people who work here everyday and the 10,000 office tenants is that we’ve just taken it up a notch — now it’s not the first time those fire fighters have been here. If they end up here for an emergency we’ve had coffee with each and every one of these guys and they have toured the rear corridors of the place, which are 100 km in length,” says Cedrone.

“Once you bridge the gap between the public and private sector, they’re willing to listen for the public good. They’ve also come to respect us and know that they rely on us too — there is a trust now.”