The 22 Push-Ups | 22 Days Challenge has partnered with Wounded Warriors Canada on their national campaign to bring awareness and attention to the rate of suicide amongst our Canadian Armed Forces members, veterans and first responders. 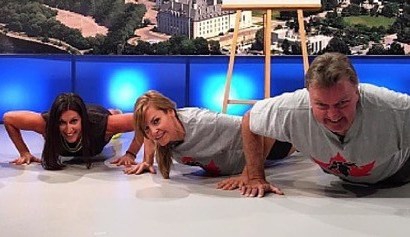 In 2013, statistics in the United States revealed that an average of 22 veterans commit suicide every day. In Canada, we lost 160 veterans to suicide between 2004 and March 2014 – greater than the total number of Canadian Armed Forces members killed during the war in Afghanistan.

It is this staggering reality that led four individuals from Ottawa to create the 22 Push Ups | 22 Days Challenge. The goal is for Canadians to nominate a friend, family member or colleague and challenge them to do 22 push ups for 22 days. Each nominee is encouraged to make a minimum donation of $22 to Wounded Warriors Canada. Participants then post their videos on social media and nominate or encourage others to join the fight.

Trevor MacDougall from 22 Push Ups | 22 Days Challenge commented, “The response has been overwhelming. I have a brother in the military and my father also served. I think we all know someone who’s been impacted either directly or indirectly from this. The 22 Push Ups Challenge is such a small way that we can let them know, we’re here for them. We want to help. We’ve had people who can’t physically do the push ups do squats or crunches instead. It’s really about the intention behind the action and making the $22 donation.”

Scott Maxwell, executive director of Wounded Warriors Canada, commented, “One suicide is one too many. We are proud to be the charitable partner of the 22 Push Ups | 22 Days Challenge and hope this campaign helps drive national awareness, education and fundraising to help us deliver our life-changing programs for those suffering with invisible injuries. Agree to do 22 push ups for 22 days and show our ill and injured veterans and first responders that they are not alone in this fight.”