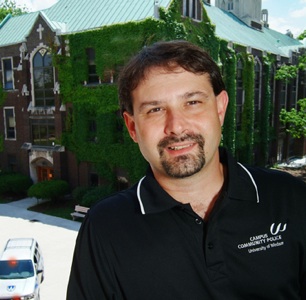 In February of this year, a van exploded on the side of Hwy. 401 just outside of Windsor, Ont.

The explosion wasn’t all that large, but the van contained a Radiological Dispersal Device — a weapon designed to contaminate an area with radiation. Fortunately, this was just an exercise, and the device a training tool. There was radioactive material present, but very minimal — nothing that posed any kind of threat to the nearby population.

The van was part of a multi-jurisdictional exercise, called Central Gateway, designed to test emergency preparedness for Windsor and the County of Essex. The City of Windsor was on board, along with the Ontario Ministry of Transportation, the Ontario Provincial Police, the Canadian Nuclear Safety Commission and a half dozen others, including several major energy companies and authorities in the neighbouring City of Detroit.

Another major contributor was the University of Windsor, in particular, Sgt. Chris Zelezney, who starting laying the groundwork for emergency planning several years ago. In the wake of the twin tragedies at Dawson College and Virginia Tech, the university took a closer look at its own emergency preparedness plans and found them “woefully inadequate,” says Zelezney. “We began the process of re-evaluation and formalization of emergency management on campus.”

Zelezney, first hired as a Special Constable in 1994, assumed the role of emergency preparedness co-ordinator and got to work. The university acquired mass notification and wireless public address systems, as well as beefing up its surveillance and purchasing several software packages: WebEOC, a virtual emergency operations centre, and Emergeo Fusionpoint, a dashboard tool designed to share information such as video feeds, GIS maps, activity logs and other relevant emergency data. The software was provided by FutureShield, a security solutions provider based in Bolton, Ont., who also provided training and support for more than 200 users.

In 2010, Zelezney decided to expand the reach and capabilities of the university’s newly established security operations and reached out to the City of Windsor and the County of Essex, in particular Phil Berthiaume, Emergency Management Coordinator for the County of Essex and Fire Chief Dave Fields of the City of Windsor. By providing various emergency departments and first responders access to the tools, data could be shared more easily, providing all parties the proverbial big picture of emergency events happening in the area.

“We can actually grow that virtual emergency operational centre on a regional basis,” says Zelezney. “It just makes sense.”

The Central Gateway exercise “came on the heels of that step of our development,” he says. Initially an exercise put together by the Windsor-Essex County Regional Emergency Management Coordination Committee, of which Zelesney is a member, it drew the interest of the DRDC Centre for Security Science (CSS), a joint endeavour between Defence Research and Development Canada (DRDC) and Public Safety Canada.

CSS saw the exercise as an ideal staging ground for its own research. “This exercise provided a chance to demonstrate some technology that promotes interoperability. That’s how I got involved,” says Jack Pagotto, head of emergency management and systems interoperability, science and technology at CSS.


The CSS team wanted to put Capability-Based Planning through its paces — a system of cataloguing and assigning equipment for a particular event. Based on a U.S. system called NIMS (National Incident Management System), it takes account of everything required for an emergency, right down to the number of chairs and tables needed for a temporary kitchen.

“There’s a best practice that’s developed out of Canada the U.S. and the U.K. in the last 10 years where instead of looking at your systems as trucks and vehicles and people, you look at them as capabilities,” he says. “It’s a different way to do the analysis of where your gaps are.

“We came on board and added funding as an opportunity to try this capability-based planning approach, which includes a framework of categorization of equipment and has a methodology doing a risk assessment — scoring your ability to perform to a particular incident, whether it’s an earthquake, or a flood or in this case, a terrorist-type activity.”

“Capability-based planning is kind of a standardized set of language around the ‘who’ part and the ‘what’ part when you’re talking about the planning and sharing of resources,” adds Sheldon Dickie, Responder Capability Analyst, DRDC-CSS, who says his job on the exercise was looking after the “big picture.”

Central Gateway involved the aforementioned radioactive material in a van, as well as other field events designed to test the effectiveness of emergency departments and other responders. It was also an opportunity for Pagotto to try out another project CSS has been working on: the Multi Agency Situational Awareness System (MASAS).

MASAS is a real-time dashboard for emergency responders, providing information on everything from weather conditions to road closures. In some ways it’s like the virtual emergency operations centre the University of Windsor has implemented for its area, but on a larger scale. It’s also built on open architecture, allowing multiple agencies, jurisdictions and municipalities access to data no matter what their own internal infrastructure looks like. “It’s not an application; it’s more a set of standards that link together existing applications,” says Pagotto. For organizations or small municipalities that don’t have the means to hook into MASAS, a basic toolkit can be provided.

“It’s an approach to link together all the different stovepipe systems that are out there that have data that’s useful to an incident,” says Pagotto. “What my project was doing was showing that we can link all that information together and make it available on a map. It’s very much like Google Maps, where you can pull up the nearest hotel. What we’re talking about it is providing the emergency response equivalent to that.”

The Central Gateway exercise was the ideal proving ground for MASAS, since it involved multiple events and scenarios, as well as a long list of different agencies participating.

“What we demonstrated was how MASAS would provide a benefit to all the different actors in an exercise. Fire, Police, Medical — they can all be looking at the same map. Prior to MASAS, everyone had their own system. They can see their own resources, but they can’t see where everyone else is. MASAS allows everyone situational awareness of what each other is doing,” says Pagotto.


Zelezney and his team were able to hook into MASAS using their emergency operations software, watching events as they unfolded in real time.

“When they were doing the exercise, we were talking with Detroit for the first time, internationally online, which is amazing to do,” he says. “At the same time, we were joining in MASAS feeds from the Sarnia area and seeing in real time actual live incidents that were going on during the exercise.”

Zelezney is able to push information out to MASAS, sharing data with other emergency responders, as well as pull information into his own systems. Pagotto believes MASAS could revolutionize the way emergency data is handled across the country. Too often, he says, emergency operations centres turn on the television as their primary source of information.

“What you see on the ops centre screen is CNN or CBC because that’s usually where you find out first that something is happening. What MASAS is providing is an advance even on that. I keep saying we need to be ahead of what the reporters are providing.”

British Columbia and New Brunswick are leading the charge on MASAS adoption, he says. “They’re deploying a MASAS capability at the provincial level, but it’s becoming a national architecture.”

MASAS can also be accessed on a portable device, making it invaluable to responders who are already in the field. At the moment, it’s being envisioned as a tool strictly for official use, but could be used as a public alerting system sometime in the future. Pagotto says it could eventually pull data from social networks like Twitter or Facebook, “but we’re not crossing that line yet because we haven’t cracked the nut on how you trust what’s coming out of that feed.”

There will be more of these exercises coming across Canada for CSS, says Dickie. They are valuable and instructive, since it’s immediately apparent where any gaps in strategy or equipment may occur. Each time an exercise is run, the gaps are narrowed or eliminated and the nation is that much safer.﻿