Olympics spark 45 per cent jump in business for Commissionaires 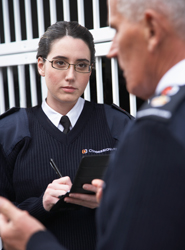 As the Winter Olympics draw near the Commissionaires BC says the demand for security services is unprecedented as the lower mainland and Whistler prepare for the biggest security operation in Canadian history.

From January to March the company says demand for guard services is up
45 per cent compared to winter 2009. What’s been driving the burst of business
in December and January has been new clients looking for additional
security during the Olympic period as companies in the lower mainland
realize they need a more detailed security plan than they originally
thought.

The US department of State issued an assessment recently noting that
as security increases around Olympic venues, terrorists could shift
their focus to other areas.

The guard work in B.C. consists primarily of
guarding critical infrastructure such as port facilities,
transportation systems, and tourist attractions. This demand means the
company is hiring at an increased rate.

More than 300 extra people have
been hired, fully trained, security cleared and licensed by
Commissionaires BC since October 2009 for Olympic-related work. The
company is still looking to hire and train another 30 to 40 of people
by early February.

At a one-day hiring blitz in December, Commissionaires BC hired 54
people in eight hours. In a typical month the organization might
receive 60 job applications, but last month they had over 500
applications.

The pay rate starts at $12.50/hour, additionally
Commissionaires will offer a $4 per hour special Olympics allowance
until March 6, 2010. These jobs are temporary, but could lead to
continued employment. During this Olympic hiring period only,
Commissionaires will provide Basic Security Training (BST) for free for
the 6-day course.
In order to participate in the hiring blitz, applicants must first
submit their application via the company’s website.

Appropriate
candidates are then invited to the hiring blitz for an in-person
interview.

Those interested can find out more by visiting commissionaires.bc.ca
Commissionaires BC has a team of more than 1,600 professionals.