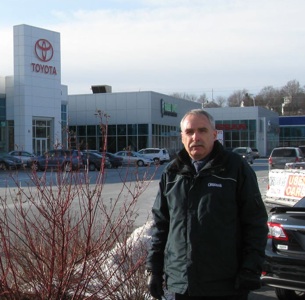 O’Regan’s, one of the largest auto dealerships in Nova Scotia, recently implemented a major access control system to accommodate the amalgamation of five separate businesses.

Three years ago, O’Regan’s decided to bring three of its dealerships in Dartmouth into one central facility to create the first auto mall in Nova Scotia. It bought a former warehouse location of The Home Depot, comprising of 10-acres of land and a 3-acre building with plans to turn the facility into a state-of-the-art auto mall housing the three independent dealerships, a used car dealership and an undercoating and paint protection facility.

With five separate businesses to secure and an employee base of 200 people at this one location, O’Regan’s needed to implement an access control system that would be easy to manage, enable managers to limit access to secure areas, such as its IT room and parts departments, and allow each business unit to operate at different hours, if needed.

The car dealership wanted to implement a single access control system and alarm system that could operate like five independent systems, without the complex issues often associated with managing five different systems. The access control system would replace standard keys previously issued to employees to unlock and lock doors, as well as integrate with the alarm and video system to monitor its $10-million inventory of vehicles and automotive parts at the brand new facility and manage overall access of employees.

O’Regan’s also sought to incorporate several elements that are part of the Crime Prevention Through Environmental Design (CPTED).

Taking that approach with O’Regan’s involved a multi-faceted initiative, tying in multiple security and design elements, such as:

•    ensuring a clear line of site throughout the expansive 10-acre property, with no major physical obstructions
•    installing a chain link fence around the property as well as proper lighting
•    deploying surveillance cameras throughout the car dealership lot
•    implementing a 24/7 secure alarm and access control system to secure O’Regan’s physical building and the assets contained inside

The Solution
When O’Regan’s began the build-out phase for its new auto-mall, company officials had the flexibility to build a system from the ground-up and work in conjunction with a systems integrator and electrical team to install a hard-wired security system. They selected EntraPass Global Edition software from Kantech, integrated with a DSC PowerSeries alarm control panel, to enable them to effectively manage access control cards and the overall system remotely, plus integrate the entire alarm system with video.

“We could’ve easily proposed five smaller systems, but that would not have been consistent,” said Roger Miller, Vice President of Operations for Northeastern Protection, the systems integrator hired to implement the system. “We wanted it to be expandable and easy for changes to card programming from a central point of control at the company.”

Northeastern Protection installed Kantech proximity readers at the primary entrance areas for each business unit. The first person in for the day opens the door and disarms the alarm for the entire day. Each business unit also operates its own parts centre, with each door controlled with electronic strike locks managed by the Kantech KT-300 door controllers to limit access to only authorized employees.

“The access control system lets you know who is coming and going at certain times and can pick up on patterns that aren’t normal,” said Ron Cox, Director of Parts Operations at O’Regan’s. “Once the system is in place and people are aware of it, they are better managers of themselves.”

In addition, by implementing a single Kantech access control system, O’Regan’s can easily make changes to an employee’s access privileges from one system, instead of having to log into two separate systems.

“With a staff of 200, we can have people transfer from one business unit to another. Rather than having me issue a new card we can simply change the privileges on the card,” said Cox, who manages the access system from his office.

As a result of implementing an access control system and replacing keys with cards, O’Regan’s has nearly eliminated false alarms created by doors being left unlocked. Management is not required to walk the perimeter of the building to ensure each door is locked — the access control, electronic strike locks and alarm system does that automatically.

The end result is a single property housing five separate business and the company’s corporate offices with a protection system integrated into one cohesive system. The users of the individual business units have full access to their respective areas without compromising the security of other areas of the facility. Authorized cardholders can unlock their business area, disarm the alarm systems and then lock up at the end of the day, entirely independent of the other business units under the same roof.

As part of its service agreement with O’Regan’s, Northeastern Protection’s uniformed security personnel on site respond to all alarm incidents after hours. As a one-stop-shop integrator, the company provides its client with a total solution of both people and technology.

A key aspect of the security system at O’Regan’s is the DSC PowerSeries alarm panel, which has been partitioned for each business unit so only that the  business unit can control the alarm system for their respective facility. In the off hours, when no one is working, each business is protected by the DSC alarm system and monitored off site at Northeastern Investigation’s monitoring centre.

In addition, Kantech’s EntraPass Global Edition works in conjunction with O’Regan’s video surveillance system of more than 40 cameras and three DVRs. Security personnel at Northeastern Investigation’s monitoring centre can monitor the Kantech access control system and the video system simultaneously and upon receiving an access control signal they can look at the corresponding video.

The Result
Overall, O’Regan’s is enjoying numerous benefits of its integrated access control and security alarm system, including fewer false alarms, improved security for its parts departments and IT room, and greater security at the entire facility.

“The access control and security system creates a safer working environment,” said Miller. “O’Regan’s was one of the first commercial properties in the area and they’re surrounded by a high-density commercial and residential population. By taking steps to protect their assets, they are doing a larger part to protect the entire community.”
﻿