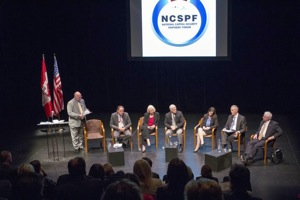 On May 31, the National Capital Security Partners’ Forum (NCSPF) presented a panel of some of North America’s top subject matter experts in security, on the topic of National Security versus Corporate Security: What the two can learn from each other.

Held at the National Arts Centre in downtown Ottawa, the panel consisted of diverse members from the areas of cyber security to military. The NCSPF event was co-hosted by the Canadian Association of Security and Intelligence Studies (CASIS) and the Canadian Council of Security Professionals (CCSP). Led by moderator Lynn Mattice, President and founder of the National Economic Security Grid (NESG) and Senior Fellow at George Washington University, the discussion included questions on Resiliency, Border Security, Cyber Security, Risk Intelligence and moving from government to private industry as a security executive.

The discussion was lively and animated with each point of discussion bringing numerous others to the front. The issues of leadership and moving outside “the box” in finding effective security solutions, were touched on numerous times and emerged as some of the biggest issues of the day. Each of the panel members brought personal experiences to the discussion including the challenges of ensuring the security for NFL players, maintaining consistently high security measures for the NFL as a whole but always being mindful of the fan experience as the ultimate mission at each game, whether played in the U.S. or as exhibition games overseas.

International industries, such as RioTinto have had unique experiences and challenges in dealing with global politics, economics and resource management. One of the surprises in the evening’s discussion, was the fact that cyber security is such a relatively new program. Despite it’s late start, the development of cyber security as an essential part of any national security or corporate security program is advancing in leaps and bounds, just as threats to cyber security seem to advance even faster. News of the Flame breaking just days prior to the presentation emphasised the participation of nations as well as individuals in these espionage tactics. The evening wrapped up with points on transitioning from government to private industry as security executives. David Quilter, representing the Security Executive Council offered some copies of his book From one winning Career to the Next (available from www.securityexecutivecouncil.com) on this topic which seemed to garner much interest from the audience.

The audience ranged from new graduates of various related school programs to senior security executives in both private and public sectors. The audience was treated to excellent networking opportunities at receptions both prior to and after the discussion. It was a well worth while two and half hours for all who attended. This was the third highly successful event for the National Capital Security Partners’ Forum, an agile network bringing together security, intelligence and defense associations from across the region.

The next event planned in the National Capital Region will be in October and will be discussing security in social media. To request more information on any Security Partners’ Forum events across Canada.