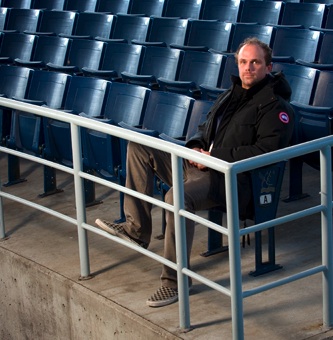 On the surface of it, being in charge of security for the Molson Amphitheatre sounds like a pretty good gig.

Your workplace is in an outdoor concert venue during Toronto’s warm summer months. You work with other security teams representing some of the biggest music artists in the world. On the other hand, you might have to deal with security problems other people can barely imagine — like concert goers lighting their picnic blankets on fire, or the Sex Pistols storming off the stage after being spat on by fans.

“With that type of crowd — it’s a punk crowd, they haven’t seen the Sex
Pistols in years, they’re wanting to relive their youth — we got to the
point where people on the floor started to rip the chairs out, tossing
them up on the stage. That actually got quite out of hand,” says Ryan
Howes, operations manager for the Molson Amphitheatre, located on
Toronto’s waterfront.

The band returned a half hour later, which took the crowd down a notch or two, averting a  potential riot.

That was back in 2003, Howes’ first year at the Amphitheatre. In the
intervening years, he’s learned a lot about managing concert security,
starting with putting together a core of 40 or 50 security guards who
can be relied upon to diffuse a situation before it escalates.

Until 2004, the Amphitheatre used contract security guards, but Howes
took the security operation in-house when it became apparent that a
group of reliable regulars might be a better option.

“As everyone knows with contracted security, there’s a high turnover
with the staffing, especially being a summer venue where you only
operate 30 days out of the year. You don’t get a lot of repeat security
guards and they don’t get to know the staff and the touring personnel
and the artists,” says Howes.

“We took the backstage security — the dressing rooms, the stage area,
the trucks and tour buses — in-house in 2004. From there we expanded
out into the front of house area. It was kind of gradual after that. We
took all our ushering and gate staff in house as well. We found that we
had more control over the staff who work for us. We had more hands-on
training. If there was a situation we had to deal with, we found we had
more control over it.”

The Amphitheatre operates from May to September, but Howes’
preparations begin in January with budgets, planning and sending out
offer letters to returning guards. In February, he starts advertising
for new employees on job websites and in colleges that offer security
courses.

Usually there aren’t that many job vacancies to fill. In a typical year, 80 to 85 per cent of last year’s guards return.

“I’m very happy about that,” says Howes. “The Molson Amphitheatre is
kind of a different environment to going to shows in hockey arenas and
club shows. It’s an outdoor venue, it’s in the summertime, it’s usually
sunny out. It’s more of an entertaining party atmosphere. For a lot of
the staff it’s a lot of fun. Even though the shifts may be anywhere
from four to eight hours, depending on the concert, people have made
really good friends down here.”

There is another round of hiring in April, bringing the total guard
complement to about 95, and orientation begins in May, a few weeks
before the official concert season kicks off. Employees go through a
training schedule with employee handbook reviews, PowerPoint
presentations, a tour of the venue, introduction to management
personnel, uniforms, and payroll.

Howes says he looks for guards with previous experience — preferably
people who have worked in bars, nightclubs or other concert venues,
have Smart Serve training, and can handle themselves in an environment
with alcohol sales and consumption.

“We are also looking for guards who have good customer service
experience — not your regular bar room type of bouncer. Someone who has
a good head on their shoulders and can communicate to patrons. Someone
who won’t manhandle the patrons if there’s an incident.”

Typically, than means guards who are 25- to 35-years-old.

“You could get anything like a Motley Crue show to James Taylor, where
the clientele is all lawyers and doctors. I find with having 18- and
19-year-olds,  you may not get that experience with having to deal with
customers and can’t really communicate with them properly.”

Guards are trained to handle situations calmly, only putting their hands on a fan as a last resort.

“We find that verbally warning a patron works 10 times better than
putting your hands on their shoulder or putting them in an armlock.”

They also move in small groups of two or three. “If you come in with a
pack of eight guys, it’s going to tick (fans) off even more. They don’t
want to feel like they’re being ganged up on.”

Having an in-house staff has fostered an atmosphere of camaraderie,
says Howes. The same 40 or 50 employees have returned year after year.
Most of them have full-time jobs outside their work at the
Amphitheatre, but there’s something about the summer concert scene that
brings them back.

There’s also the opportunity to pick up shifts in the off-season. The
Molson Amphitheatre is operated by Live Nation Inc., a live events
company that promotes or produces more than 22,000 events a year around
the world. During the winter months, Amphitheatre staff are given the
opportunity to work security for Toronto clubs where Live Nation holds
events like the Koolhaus and the Sound Academy.

The extra shifts “give them an incentive to come back each season,”
says Howes. Plus, “it gives us more control as far as staffing goes and
having the same guards in the same positions. They get to know our
management. It’s more of a first name basis thing. That’s been working
out very well. I have no plans to change that in the future.”

By the time the Amphitheatre is ready to open its doors in May, Howes
turns his attention to the details of the individual shows. Three or
four weeks before a band comes to town, Howes starts co-ordinating with
their security team. Each artist has their policies about what is and
isn’t tolerated at a show. Some will allow fans to slip past the
barricades and approach the stage while they’re playing. For others
that’s an offense that will get a fan ejected almost immediately.

Almost all bands request that beverages are poured into plastic cups.
None of them want to duck beer cans thrown on stage by overzealous fans.

Then there are the more esoteric rules. The one that causes the most
consternation is the no-umbrella rule, says Howes — some bands just
don’t want them in the house in case they become clubs or spears. It
seems sensible on the surface, but it’s hard to enforce that rule if
it’s pouring on the day and thousands of fans have brought their
umbrellas to prevent themselves from getting soaked.

“Sometimes there have been issues like that. You have to work them out and come to a common agreement.”

On the day of a concert, the equipment trucks tend to roll in about
6:30 or 7:00 in the morning and set up begins. Sound checks for the
band are usually early- to mid-afternoon.

Before then, Howes meets up with the artists’ security team and walks
them through the venue. They’re show the entrances and exits, the
set-up backstage; they cover the ejection policy and crisis plan in the
event of an evacuation (how the audio is shut down, how announcements
are made to the crowd).

Two hours before door time there’s another security meeting and all the details are finalized before the fans arrive.

Howes knows roughly what to expect during a concert based on the band
playing and the types of fans they draw. But even then there can be
surprises. Last year, Canadian band Nickelback were forced to cancel a
concert mid-way through. A lightning storm touched down in Toronto,
creating unsafe conditions, and the venue was evacuated. “It went very,
very smoothly. No issues,” says Howes.

There was unexpected chaos at a 2008 Kid Rock/Lynyrd Skynyrd double
bill. The two groups of fans didn’t mix well, says Howes, and both were
extremely intoxicated before they even arrived at the show.

“We ended up shutting down our alcohol sales very early that evening,
and even shutting down our concession stands, because the amount of
arrests and fights were just getting out of hand. It was like a
revolving door at the main gate.”

There are always paid duty police officers at Amphitheatre concerts,
often just as a visual deterrent, but reinforcements had to be called
in the day of Kid Rock and Skynyrd.

Such incidents are the exception rather than the rule, says Howes. The
craziest days of concert security were back in the 1990s, he says, when
music festivals like Lolapolooza were popular and blankets were a
common sight at all-day shows. It wasn’t unheard of for people to toss
each other up in the air with them or even light them on fire.

“In the last 15 years, that mentality at concerts has really died down.
When people are paying $80 to $100 a ticket, plus they’re paying $12 a
beer and $40 a t-shirt, they don’t really want to horse around and get
ejected.” These days, fans want to come for a good time and just enjoy
the show peacefully.

Toronto generally has a good reputation as tour destination, says
Howes. Canadians are just more laid back and polite, which creates a
better atmosphere for everyone — fans, bands and security.