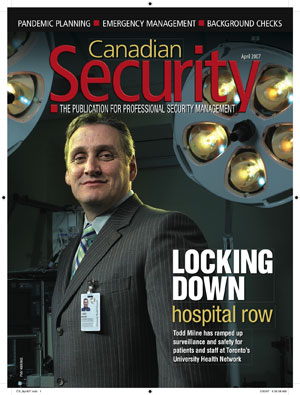 Milne is the corporate manager, security operations responsible for the University Health Network — consisting of Princess Margaret, Toronto Western, Toronto General and now his duties also include Women’s College Hospital, following the departure of its manager of security and safety earlier this year.

The UHN employs more than 12,000 people, is home to major research facilities and serves Canada’s largest urban core and some of the toughest clientele in health care. It is also among the busiest security organizations — in 2006, UHN security was dispatched to 32,078 calls.

“People ask, why do you refer to your department as security operations? But we’re not just your standard guard service; we’re really in bed with the IT side now,” says Milne who works with a security system designer who troubleshoots all the electronic security functions and is responsible for maintaining agreements with vendors.

“With all the technology we have, it is a full-time job to make sure all these systems are running properly. If you even look at the whole issue of daylight saving time — that was an effort. Even though we applied the security patches and the vendors had adjusted the software, we still had to take a day to correct things. If you assigned a certain time to a door to unlock at a certain time, it wasn’t happening as we were an hour off.”

Having technical support and the ability to troubleshoot high-end systems is a long way from where the hospital network was when Milne first started in the position.

“We’ve come a long way in 10 years,” he says. “Upon moving in here I said, ”˜Get rid of that VCR, let’s get into digital technology and let’s get camera surveillance up to an acceptable number. I don’t think you can have too many cameras — if I could, I’d have a camera for every square inch of the building, but it’s just not possible. So you strategically place cameras in areas where you’re most likely to get hit.”

Because hospitals are open to the public around the clock, it makes it tougher than in other organizations to firm up soft targets. Areas likely to be hit by criminals in a hospital include locations such as the parking garages and pharmacies. Milne has been working to harden security in those areas, and recently installed another six cameras in the pharmacy areas because they are considered high-risk.

At the same time, the challenge is to create a secure environment that is not viewed as being invasive to patients or employees.

Milne looks at the degree to which banks and casinos deploy security measures with a little bit of envy. “In a bank, you can put a camera just about anywhere you want, but it’s just not going to be like that here.”

In his cramped office located just off the busy rear entrance to Princess Margaret on 60 Murray Street, the phone seems to never stop ringing. Milne’s BlackBerry is also a constant reminder that a security manager in health care is always on-call.

“I can’t turn it off — the BlackBerry is a strong provider of information that keeps you up to date constantly,” he says.

When he’s at home, Milne can also view surveillance footage of locations within the three hospitals through a virtual private network.

The UHN hospitals are located deep in the city’s core and highly accessible to all walks of life. The subway stop is steps away as is Queen’s Park Circle. Mount Sinai Hospital is next door and the CN Tower is a few blocks south — all potential hot spots for terror attacks and Milne is acutely aware of the landmarks that surround him. The city’s business district is also right in his backyard.

Geography is a critical element to the challenges Milne deals with. Toronto Western Hospital is located in the heart of the city, in a more residential area at the corner of Bathurst and Dundas Streets. There’s more walk-in traffic at that facility compared to Toronto General’s neighbourhood, which is located in the business district and closer to the crowds of Yonge Street. Of the 300 cameras in place across the UHN, 160 are at Toronto General alone — more than the Sears Tower in Chicago.

“It is very close to Yonge Street, so when there is a shooting on Yonge Street or the stabbings that happened at the Chelsea Hotel, they’re all basically right beside us,” says Milne.

UHN has 100 security operations employees across the three sites — a mix of full-time and casual, and Milne uses in-house security officers exclusively. “We find we have more commitment from the in-house staff; the people want to be here and the pay is also higher than with a contract program,” he says, noting the in-house security staff earns about $18 to $22/hr.

Milne has also created a team of charge officers responsible for providing a leadership role in the hospital community. Presenting security’s role as being a part of the business that protects as well as enables the hospital staff to do their jobs is a strategic focus for Milne. When he recently upgraded the number of cameras at Toronto General Hospital from 137 to 160, and added magnetic locking devices, he rolled out a “Security Intensification” communication plan to staff to make sure employees understood the measures and that they did not feel alienated by them.

The magnetic locking devices safeguard controlled access to the hospital through main entrances and removes the opportunity to enter or exit Toronto General Hospital through access points other than monitored main entrances. Remaining emergency exits are locked at all times except during a fire alarm condition, to maintain a secure environment. It aids in situations such as patient management during a Code Yellow search for a missing patient and can control access in an infectious control situation.

Added cameras will monitor main entrances and create a visual account of occurrences.

“After we explained the reasons for doing all this, we received a lot of thanks from staff. For an employee, the reaction to increased security is often ”˜What does it mean to me? It feels like a jail.’ But they realized, ”˜It’s really for my safety.’”

When it comes to deploying new technology, Milne works primarily with Johnson Controls and Intercon for access control and card readers.

Two years ago Milne asked Intercon and Johnston Controls to make their readers talk to each other at Princess Margaret (Intercon), Toronto General and Toronto Western (Johnson Controls).

Neighbouring Mount Sinai Hospital also has Intercon readers, therefore if the sites ever had to combine efforts the technology would work together.

Some of the older locations in the hospitals were using old Weigand insert card readers but Intercon has now  added proximity readers so one card can be used to access all buildings.

Milne worked with Gerry Hegarty, account executive with Intercon in Toronto to make the project happen. “We’re able to program those cards (from Johnson Controls) into our system so it will understand and allow them to use that proximity technology over the older Weigand insert technology. We try to make every attempt to make the technologies talk to each other and nine times out of ten we can do it.”

“Realistically, my technology could attach to Sinai’s,” explains Milne. “I wanted to make one easy access into the UHN hospital sites. In the event we had to go to a lock down you could use your UHN ID card to enter the facilities.”

For Milne, it’s about linking the critical pieces of UHN together: people, facilities and safety.”¢