The IAHSS Annual General Meeting and Conference was held in San Diego last week, and the Medal of Valour was awarded to Security Officer Chris Brewer from “Dr. Everett Chalmers Regional Hospital” part of the Horizon Health Network in Fredericton New Brunswick. 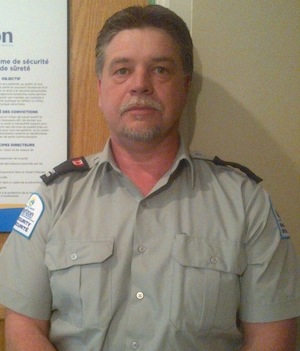 The Medal of Valour is awarded to one or more individuals in a given year who distinguishes himself/herself in the performance of duty through an act of personal fortitude that is above and beyond the call of duty. It is because of his selfless and fearless act of service during a bomb threat at the Dr. Everett Chalmers Regional Hospital (DECRH), IHSSF is presenting Officer Chris Brewer of the Fredericton Area Security Services with this medal.

On November 18, 2013, Brewer responded to a call from the Mental Unit at DECRH indicating they had a patient with a bomb. The concern with this specific situation was the fact that the patient had an electrical engineering background and assembled the device from different electrical components and solvents, aka an I.E.D.

Brewer quickly assessed the situation and convinced the patient to follow him down a fire stairwell with the goal of getting the man out of the building, away from patients, staff, and the public. As they were nearing the hospital exit, two police officers arrived to the scene. The patient made his move and tried to force his way back into the hospital with the device, but police and security held their ground with surrounding areas on major lockdown and the Police Negotiators, Explosives and Emergency Response Team attended the scene. After three hours of negotiation, the patient was subdued and removed from the hospital.

As for the I.E.D., it was removed from the facility and detonated in the parking area. It was later discovered that the patient had the exact components for an explosive device, fortunately he had not assembled the parts properly. If the bomb was functional, the blast radius would have been 20 to 30 feet, harming or killing anyone in the proximities. Placing himself in harms way, Officer Brewer went beyond the call of duty to protect the patients and staff on the hospital premises, and IHSSF is honored to present him with the Medal of Valor this year.