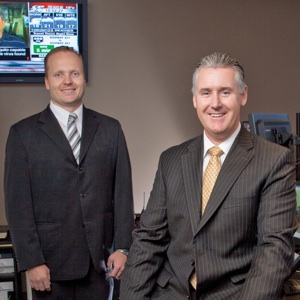 At 100 King Street West, in the heart of Toronto’s financial district, the country’s tallest commercial office tower, home to the Bank of Montreal, rises up above all others. Each day about 10,000 people go up into the 72-storey building.

It’s part of the Brookfield Property portfolio in the downtown core and just one of the 10 buildings Ken Doige is responsible for in Toronto — totalling about 10 million square feet, with two more buildings in Ottawa. Doige is director, security, Eastern Region for Brookfield Properties — one of the largest commercial real-estate companies in North America, with properties in Vancouver, Calgary, Edmonton, Toronto and Ottawa.

Doige, a graduate of the Ontario Police College who worked for nearly
17 years in public policing for both the York and Toronto Police
Service, is responsible for overseeing the security program for the
complex which expands from Bay to York Street and King to Adelaide. The
complex is home to Lombard Place, the Exchange Tower and First Canadian
Place (FCP) with its 2.6 million square feet of space, a three-level
retail centre and headquarters for BMO.

He has five security managers and the fire, life safety specialist
reporting to him, including Michael Allen who is the manager, security
and life safety for FCP.

Erected in 1972, First Canadian Place was built to be state-of-the-art,
but in the last few years the building has undergone some significant
security upgrades to address the underground parking garage as well as
ramping up its ability to react to a major security event in the
financial district.

“After the Toronto 18 (group of Muslim men and boys arrested in June
2006) questions were put to us about ”˜what are you doing to prevent and
mitigate?’ and, what is in place in terms of our ability to respond and
monitor the building?” says Doige.

While the building was always considered secure, the questions set in motion a plan for significant upgrades.
For the last two-and-a-half years Doige and his team of security
managers have been working on a series of projects for FCP including an
emergency operation centre and a new security operation centre. Doige
and the Brookfield team partnered with Johnson Controls for the
integration of the centre.

The centre includes a small boardroom-type setting that can be converted into an emergency operations base.
“During any emergency we can bring the executives or emergency
personnel here to view any of the cameras,” says Allen. “They can also
monitor the news here as it’s breaking.”

The room can also be used during mock scenarios.

“What we didn’t want to happen was to create something that would only
be used in times of emergency — a kind of ”˜in case of emergency break
glass’ scenario. So we train, train and train and if a bad day happens
the training hopefully comes right back to you,” says Doige.

Doige’s vision was to build a state of the art, fully integrated centre
where the department now offers improved services to the facility and
tenants.

Despite the increase in cameras to FCP, Doige is a big believer in
maintaining a consistent level of security officers on staff. His
vision is to integrate security systems with the human element of the
guard force to complement each other.

“It has to all work together. Reducing bodies is a big mistake to
make,” he says. “You can’t replace a well-trained guard with cameras.
The bad guys don’t necessarily see the cameras, but they do see the
physical presence of guards.”

The goal was to integrate systems for interoperability and redundancy
to other Brookfield Properties (BP) buildings in the financial
district.

Increasing and improving security measures also speaks to the bottom
line. When you’re in the property management business the goal is to
demonstrate a serious commitment to tenant and public safety and
continuous improvement of security at the facilities is critical. A
secure property is attractive to tenants and can demonstrate real
value.

Johnson Controls handled the integration on the project and worked with
Genetec’s Omnicast software system to use the hybrid CCTV system with
both IP and analogue converted camera’s along with TOA’s control system
which is connected to two of the three, 24-hour security desks to each
station for redundancy.

Guard comfort was something Doige and his team considered when creating
the security operations centre. A state-of-the-art custom designed
security console has a unique sit-stand feature. The unit was designed,
manufactured and installed by Novalink of Mississauga, Ont., which
manufactures work stations. The room was fitted with easy made controls
with integration provided by audio/visual specialists Duocom.

The centre also allows the property to offer another layer of security
to the facility’s security infrastructure and has opened up the
opportunity to offer more security technology-based services such as
alarm and CCTV monitoring to FCP tenants.

Doige and his team annually conduct threat and risk assessments (TRA)
of Brookfield Property’s facilities. One of the action items that arose
from the TRAs was that Doige realized the need to investigate options
for improved hard key security within each property.

In 2008, he selected Canadian Time Systems Ltd. as the partner to
provide the properties with electronic key control cabinets with the
addition of biometric readers for added security.

In 2009, the boxes, which are manufactured by Deister Electronic were
put in place. This new system will allow each property’s security
manager to track keys in real time knowing who signed them out, who is
authorized to use them and when the keys should be in or out of the
box.

During the 2008 facility Threat and Risk assessments Doige and his team
of security managers identified the need for higher quality IP cameras
in strategically placed areas for better monitoring of facilities. Each
property worked with their respective technology partners such as
Diebold, Johnson Controls and Intercon Security Personnel Services/ADT
Advanced Integration to help identify the needs of the security
managers and to help integrate the newer technology to the existing
systems in properties such as the Hudson’s Bay Centre, 2 Queen Street,
Brookfield Place, the Exchange Tower and First Canadian Place.

A priority for Doige has been to create a new way of thinking for the
property managers and security managers alike with respect to creating
teams using the newly developed emergency action plans covering the
spectrum of emergencies that are common to commercial office tower and
retail facilities. Each department is required to meet and train on the
plans on a regular basis. Doige sought out ways to improve mass
emergency communications to staff and tenants alike and selected the
Send Word Now program to facilitate these communications for all the
properties in the Canadian portfolio. The system has the ability to
e-mail and phone emergency contacts in the event of an emergency or
when a consistent message needs to get out to all the tenants quickly.

Doige is active in the downtown core working with other security
managers and directors to harden the systems in place and improve
communications. He is a member of the Toronto Association of Police and
Private Security (TAPPS), the Canadian Society for Industrial Security
(CSIS Inc.) and ASIS International.

Doige is currently heading up a project with his peers from neighboring
commercial real estate groups to create a common radio channel in the
financial district and throughout the PATH system between local
security executives, their SOCs, the Toronto Emergency Medical Services
(EMS), the Toronto Police Service (TPS), the Toronto Fire Service
(TFS), and the Emergency Management Office to name a few. This will
improve real time communications in the core in the event of an
emergency. It has never been done in Toronto’s financial district
before.

The goal is to also improve the dissemination of information to tenants
to assist them in the event of an emergency. In the past, protest
groups such as the Ontario Coalition Against Poverty have held protests
in the PATH, Toronto’s underground walkway, which feeds into FCP.

“If we can provide clients with information that may affect their day,
whether it’s about a protest or a power failure, we can really make a
difference in how a situation is handled,” he says.