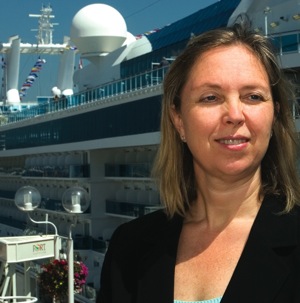 From executives to longshoremen, the 200 people who have security clearance for restricted areas at the Vancouver Fraser Port Authority represent a wide range of individuals.

That means when it came to installing a secure access control system to
the areas the technology had to be simple, non-invasive and easy for
people to interact with every day. The choice was vascular scan
technology and today there are 50 scanners installed at IT and utility
rooms and at all high security environments around the port’s cruise
facility. Vascular pattern-recognition technology takes a picture of
how the veins are laid out in the back of a person’s hand. It reads the
biometric from a card, and then asks the person for their hand, and
matches their hand to what is stored on the card.

“My main focus was to get it into our control centre first,” says
Melanie Costley, Senior Manager Security  Operations and Security with
the Vancouver Fraser Port Authority. “I wanted to make sure anyone
going in there was authorized and I know the only way to do that was to
use some sort of biometric with the cards we have.”
The port worked on the project, which was completed last September,
with PBA Consulting Engineers of Victoria, B.C., along with
SimplexGrinnell out of Delta, B.C., who installed the vascular scanners
from Toronto-based Identica Canada Corp. Getting the technology to work
perfectly involved trial and error, says Costley.

“It was a slow process — mainly because there was some learning things
for the installers. We have a highly secure IT network they had never
come across before,” she says.

They also learned that the readers all must be installed at exactly the same height.

“If you’re putting your hand in the scanner and you’re putting your
hand in low versus higher up it might be catching you at a different
spot. We put them in, but needed some modifications done. On some of
our doors we already had card readers and there may have been a switch
there and they tried to put the scanners in to accommodate everything
else and that was a big mistake — they all have to be at the same
height,” she explained.

The installation of the vascular scans cost $260,000, of which the
Marine Security Contribution Program (MSCP) covered 75 per cent.

The MSCP was announced May 7, 2004, and was a three-year,  $115-million
commitment from Transport Canada to assist ports and marine facilities
with security enhancements. It provided 75 per cent funding to each
approved project. The fund was created to offset the costs associated
with rapid regulatory change in the marine community, pro- vide an
incentive for facility owners/ operators to address evolving marine
security requirements, contribute to the maintenance of a consistent
security standard and reduce the likelihood of a marine transportation
security incident. The funding was also created to maintain the
competitiveness of Canada’s marine transportation sector.

Canada’s largest and busiest port, VFPA trades more than $53 billion in
goods with more than 100 trading economies annually and generates an
estimated $6.3 billion in GDP.

With that in mind, Costley, who came from the aviation industry before
arriving at VFPA in 2003, had consulted with several airports about the
biometric technology they were using before deciding on the vascular
scanners. The port also has about 50,000 existing proximity cards and
they want- ed to migrate to HID iClass.

“We actually did a modification to our unit to allow it to work with
the existing proximity cards and also smart cards so that they could
migrate those people over slowly,” says Terry Wheeler, CEO of Identica
Canada Corp.
In terms of enrollment, the port can now enroll a new person’s card in
the scan system in less than 10 seconds. Until it moves to smart card,
the biometric template is stored on the VFPA network.

“We have a wide variety of clientele that will be using it in the long
run. We have some maintenance personnel who often have dirty hands and
fingerprints could pose a problem. And while the iris scan is used at
the airport, a lot of people question what it’s really doing and we
wanted something that met our needs around knowing who was going in and
out not concerning the staff about what we’re doing with the
biometric,” says Costley. “There is no database of your vascular scan.”

“From our review, we felt that except for the odd person who has a hard
time getting a vascular scan to work, like diabetics, it just seemed to
be so easy.” Everyone going into these restrict- ed areas all have
Restricted Area Two Transport Canada clearance. “They would have had to
give fingerprints for that, but we wanted to make sure it was something
the employees were happy with,” she says.

The Vancouver Fraser Port Authority is looking into upgrading its port
card, but Costley says whatever format it takes, it will always be
compatible with the biometric readers but separate because not everyone
will need that kind of access.

Vancouver Fraser did look at a bio- metric card that you put the
thumbprint on the card but thumbprints are challenging to use and cards
are $200 each. The Halifax Port Authority has also deployed the
scanners, but Costley says others don’t have the same level of infra-
structure to deal with that Vancouver Fraser does.
“A lot of the terminals are holding off to see what Transport Canada
says about it all. In the U.S., they told every- one, ”˜Here’s what you
have to do.’  Here, Transport Canada is not going to tell them which
biometric to use — they need to ensure it’s performance- based and that
who they let in there is qualified. In my mind biometrics is the only
way to do that — or a guard which is less reliable and more expensive
over time.”