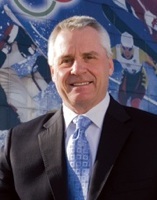 Overseeing the development of security infrastructure at an Olympic site is familiar territory for Brian Phillips.
During the 1988 Calgary Winter Olympics he was part of the RCMP’s Integrated Security Unit. In 2010, he will be looking at things from a slightly different vantage point in Vancouver as the director of public safety for Bell Security Solutions.

For Phillips, the task at hand is all about risk management and protecting core infrastructure.
In these days leading up to the Vancouver games, Phillips is
responsible for making sure those responsible for security can rely on
the communication system to deliver during a time when the global
spotlight will be on B.C. as it takes the world stage.

“This is the big game and there’s nothing simple and easy about putting
on the Olympics, but Canada has a stellar record in putting on big
events. We’ve hosted prior Olympics, whether it was Montreal or in
Calgary. We’ve done Papal visits so we certainly have the knowledge,
skills and abilities to do it,” he says.

The security budget for Vancouver 2010 was set at $175 million, but
many, including RCMP Assistant Commissioner Bud Mercer, the new top cop
in charge of security for the Olympics, say it is too low. With about
600 days to go, it’s likely that figure will come into question several
times as the final crunch period draws nearer.

“It’s a massive scope especially on the technology side, but the beauty
is, we do it everyday. It doesn’t matter if it’s helping out with
summit leaders at Montebello or an ice storm — this is right in our
swing zone,” says Phillips.

Right now, half of Phillips time is spent on Olympic-related work. Bell
has been working around the Olympic project for three years already,
laying the communication backbone and security for the event.

Security for the 2010 Olympic and Paralympic Winter Games will be
organized and delivered by the federal and B.C. governments through the
Vancouver 2010 Integrated Security Unit (V2010ISU). With the RCMP as
the lead agency, V2010ISU will include representatives from the
Vancouver Police Department, West Vancouver Police Department, the
Canadian Security Intelligence Service (CSIS) and the Canadian Forces.
Bell is investing about $200 million in the Olympics. About half of that is in infrastructure for the games.

“In the command centre, it’s not about the flat screen televisions,
it’s not about the camera hanging on the wall in the athlete’s village
or the smart card credential  — the real true asset is the information
and that has to be made available in next to real-time because it is
vital for the decision making of those security people,” says Phillips.

“We have to guarantee 99.999 (per cent) up time. Within seconds of that
athlete crossing that finish line the information is diffused around
the world through the broadcasters. So if you’re the Vancouver
Organizing Committee (VANOC) or if you’re the RCMP Integrated Security
Unit it is very important that information and that network is
resilient — we can’t have that going down,” he says.

While many see Bell as simply a vendor of technology and services,
Phillips says the reality is it has always been inextricably linked
with critical infrastructure protection in Canada.

“The interdependencies with the energy sector, the transportation
sector and others — the true asset is the information. When they have
access to information we can make their security posture a lot better
and it’s the same with the effectiveness of their people,” he says.

Phillips has been with Bell for three years but in his career he has
conducted comprehensive security audits for major events. Prior to
joining Bell, he spent 28 years in operations with the RCMP as a first
responder in detachments for many years. He served as incident
commander during floods, was present during the Swiss Air disaster and
spent a lot of time in the office of the RCMP commissioner deploying
resources all across Eastern Canada during the ice storm. He was
involved as a site commander and motorcade commander during the 1988
Calgary Olympics and served as executive officer for retired
Commissioner Philip Murray and spent two years travelling the world
with him.

“If you want to know what can go wrong, I’ve got plenty of time to tell
you,” he says. “When things go wrong they really go wrong and it’s
never just one thing Â­— it can be pandemonium.”

He says the RCMP’s new point man for the security project, Bud Mercer,
has identified three stages of planning for the Olympics: strategic,
conceptual, and functional. Despite reports from critics to the
contrary, Phillips says planning for the big event is at the functional
stage. Realistically speaking, they should still be at the strategic
planning stage, but things have advanced quickly.

“They usually give about five years to go through all three stages but
right now it’s at functional planning stage. It’s risk based, which is
good because you’ll never have enough resources to secure everything,”
says Phillips.
About 80 per cent of the solutions on the technology side are going to
come from the private sector. IT provider Atos Origin has outfitted
every Olympic venue since Barcelona in 1998 and they will be
transferring that template to Vancouver.

“They are taking it from Beijing and coming here,” he says.

“The beauty is that we’re working with companies that have done this
before. I remember where things were in Calgary in 1988 about this time
and our planning period was a lot shorter. Now, it’s a lot longer."

Bell has been involved from the beginning in projects such as the new convention centre venue in Vancouver.

“If you’re going to design security in, isn’t it nice to design it
upfront? The convention centre is a huge project and it’s a lot easier
to design it at the front end rather than bolt on after the venues are
complete,” he says.

Phillips is considered a subject matter expert within Bell, dealing
with VANOC, the Integrated Security Unit of the RCMP and RCMP
headquarters. First responders, police and fire are also part of the
plan.
“I know the lay of the land very well there,” he says.

He also spends a lot of time with sponsors and technology partners such as Atos Origin.
“It’s not just about the actual security people but those providing solutions for them,” he says.

Emergency management
When he’s not focused on the Olympics, Phillips works with other
corporations to harden their security footing.  “If you look at the
surveys that have come out over the years they show not everybody is on
board,” he says.
One of the biggest issues Phillips says he deals with is the Principles
for Effective Response. One of the most critical ones is having an
effective governance structure.

“It doesn’t matter if we’re dealing with the Olympics or dealing with a
university or critical infrastructure like Hydro One or Hydro Quebec —
the big issue is, who do you deal with when you go talk to these
organizations? Under governance is this notion of leadership and
accountability — the one throat to choke. And the other is, who has the
mandate and who gets the resources? You end up talking to a whole bunch
of folks.”

For example, universities are asking about deploying specific tools
such as rapid notification/communication software packages that can
push out information to any device during emergencies.
But Phillips says contact databases must also be kept up to date.

“There’s nothing worse than these lists that are past their best-before
date with so many people that have changed on the list,” he says.

Resource commitment and technical expertise combined with ongoing
maintenance is also a challenge at universities. “They don’t really
bolster the CIO shop with really high-end people Â­Â­— they always seem
stretched for resources,” he says.

What universities and many other large corporations also don’t have a handle on is who in their organization controls what.

“If I went to a university and wanted to talk to them about improving
their security posture, they usually have their own police force and
often they have a facilities person and . . . you may also have to talk
to health services. You have to pull quite a large group together. One
of the things I find in security is a distinct lack in effective
governance around that. Who is the leader, who is accountable?” he says.

“Security,  safety and risk management all come from the organizational
chart. One of the questions I always ask is when was the last time the
CIO, CISO, the corporate security person and the risk person went out
and had a coffee? Some of these people don’t ever talk to each other.
If you can facilitate having coffee with those people they may find
they have a lot to share. If you have that, you probably have a better
chance for success.”